Gulf Disaster "Far From Over" 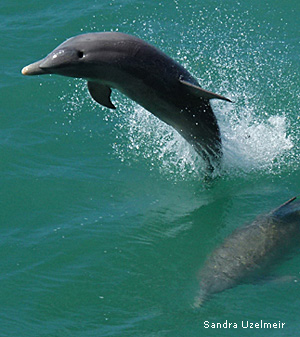 APRIL 20 MARKS TWO YEARS since the Deepwater Horizon rig exploded, killing 11 men and initiating a three-month eruption of more than 200 million gallons of crude oil into the Gulf of Mexico before its well was capped. Yet a new NWF report reveals that, “This oil spill is far from over.”

An estimated 1,050 miles of beaches and wetlands were contaminated with oil during the course of the disaster. NWF staff visited Louisiana in March and discovered oil still beneath its coastal marshes. Although most of the wildlife killed as a result of the spill were probably not found, more than 8,000 birds, sea turtles and marine mammals were reported injured or dead in the first six months after the spill, and scientists and wildlife managers are continuing to find dying or dead wildlife in the region.

The oil attacked an already weakened coastal wetlands ecosystem. Because of decades of levees, river rechannelization, dredging of canals for oil and gas development and devastating hurricanes, a football field of marsh habitat erodes into the Gulf every hour. A Degraded Gulf of Mexico: Wildlife and Wetlands Two Years into the Gulf Oil Disaster, written by NWF Senior Scientist Doug Inkley, gives an overall grade of health for the region’s wetlands as “poor” and tells about the oil’s impact on six wildlife species or groups of species (see these animated maps) that depend upon a clean, productive Gulf ecosystem.

Since the spill through March 25, 2012, 523 dolphins, many of them juveniles, have been found stranded in the affected area; 95 percent of them were dead. The National Oceanic and Atmospheric Administration (NOAA) says, “This magnitude of strandings in the northern Gulf is unprecedented.” Five species of sea turtles live in the Gulf, of which four are endangered. Up until April 5, 2011, 1,149 sea turtles were found stranded, of which 609 were dead or dying. Of these, 481 were Kemp’s ridley, the most endangered sea turtle in the world. As of May 2011, 826 brown pelicans were collected in the area, of which 577 were dead or later died. Bluefin tuna, which are declining, have two breeding areas in the Gulf. Oil has also covered and killed an unknown number of the Gulf’s deep-sea corals.

A Call for Restoration

The full consequences of the disaster may be unfolding for decades—oil can still be found in Alaska 23 years after the Exxon Valdez spill.

“The disaster response focused on removing oil, with little action taken to address the long-term degradation of wetlands,” says Inkley. “The future of Gulf Coast wetlands, wildlife and the way of life of local communities are depending on Gulf Coast restoration.”

NWF is calling for the U.S. Congress to pass the RESTORE Act, which would direct the fines and penalties levied against BP and other responsible parties to restoring the Gulf Coast. NWF President and CEO Larry Schweiger said today: "Two years later, the oil remains, the promises are forgotten, and Congress still hasn’t done its job. Now that both the House and Senate have voted on the Restore Act, it is time to get a strong bill, without poison pills, to the President’s desk. The only fair and right solution is for fines from the oil disaster to be reinvested in the Gulf region to help the people and communities hurt by the disaster. A healthy Gulf ecosystem will lead to economic recovery."

The report also recommends that federal and state agencies implement a comprehensive Gulf Coast restoration strategy and that oil and gas leasing practices and permitting requirements be reformed to better safeguard wildlife and the environment. Other recommendations and much more can be found in the downloadable report.