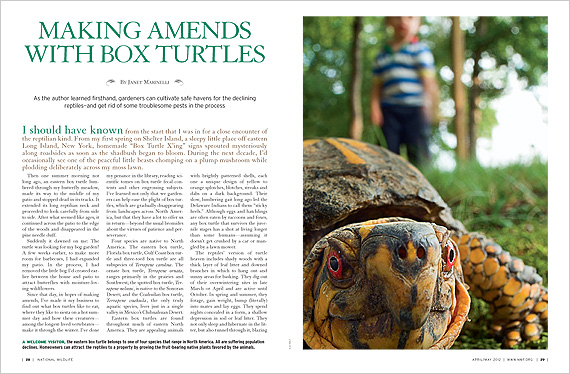 I SHOULD HAVE KNOWN FROM THE START that I was in for a close encounter of the reptilian kind. From my first spring on Shelter Island, a sleepy little place off eastern Long Island, New York, homemade “Box Turtle X’ing” signs sprouted mysteriously along roadsides as soon as the shadbush began to bloom. During the next decade, I’d occasionally see one of the peaceful little beasts chomping on a plump mushroom while plodding deliberately across my moss lawn.

Then one summer morning not long ago, an eastern box turtle lumbered through my butterfly meadow, made its way to the middle of my patio and stopped dead in its tracks. It extended its long reptilian neck and proceeded to look carefully from side to side. After what seemed like ages, it continued across the patio to the edge of the woods and disappeared in the pine needle duff.

Suddenly it dawned on me: The turtle was looking for my bog garden! A few weeks earlier, to make more room for barbecues, I had expanded my patio. In the process, I had removed the little bog I’d created earlier between the house and patio to attract butterflies with moisture-loving wildflowers.

Since that day, in hopes of making amends, I’ve made it my business to find out what box turtles like to eat, where they like to siesta on a hot summer day and how these creatures—among the longest-lived vertebrates—make it through the winter. I’ve done my penance in the library, reading scientific tomes on box turtle fecal contents and other engrossing subjects. I’ve learned not only that we gardeners can help ease the plight of box turtles, which are gradually disappearing from landscapes across North America, but that they have a lot to offer us in return—beyond the usual bromides about the virtues of patience and perseverance. 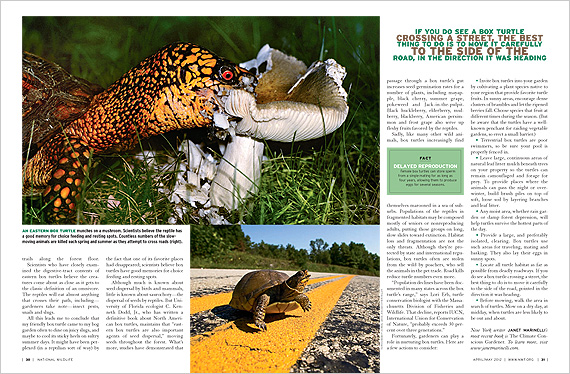 Eastern box turtles are found throughout much of eastern North America. They are appealing animals with brightly patterned shells, each one a unique design of yellow to orange splotches, blotches, streaks and dabs on a dark background. Their slow, lumbering gait long ago led the Delaware Indians to call them “sticky heels.” Although eggs and hatchlings are often eaten by raccoons and foxes, any box turtle that survives the juvenile stages has a shot at living longer than some humans—assuming it doesn’t get crushed by a car or mangled by a lawn mower.

The reptiles’ version of turtle heaven includes shady woods with a thick layer of leaf litter and downed branches in which to hang out and sunny areas for basking. They dig out of their overwintering sites in late March or April and are active until October. In spring and summer, they forage, gain weight, bump (literally) into mates and lay eggs. They spend nights concealed in a form, a shallow depression in soil or leaf litter. They not only sleep and hibernate in the litter, but also tunnel through it, blazing trails along the forest floor.

Scientists who have closely examined the digestive-tract contents of eastern box turtles believe the creatures come about as close as it gets to the classic definition of an omnivore. The reptiles will eat almost anything that crosses their path, including—gardeners take note—insect pests, snails and slugs.

All this leads me to conclude that my friendly box turtle came to my bog garden often to dine on juicy slugs, and maybe to cool its sticky heels on sultry summer days. It might have been perplexed (in a reptilian sort of way) by the fact that one of its favorite places had disappeared; scientists believe box turtles have good memories for choice feeding and resting spots.

Although much is known about seed dispersal by birds and mammals, little is known about saurochory—the dispersal of seeds by reptiles. But University of Florida ecologist C. Kenneth Dodd, Jr., who has written a definitive book about North American box turtles, maintains that “eastern box turtles are also important agents of seed dispersal,” moving seeds throughout the forest. What’s more, studies have demonstrated that passage through a box turtle’s gut increases seed germination rates for a number of plants, including mayapple, black cherry, summer grape, pokeweed and Jack-in-the-pulpit. Black huckleberry, elderberry, mulberry, blackberry, American persimmon and frost grape also serve up fleshy fruits favored by the reptiles.

Sadly, like many other wild animals, box turtles increasingly find themselves marooned in a sea of suburbs. Populations of the reptiles in fragmented habitats may be composed mostly of seniors or nonreproducing adults, putting those groups on long, slow slides toward extinction. Habitat loss and fragmentation are not the only threats. Although they’re protected by state and international regulations, box turtles often are stolen from the wild by poachers, who sell the animals in the pet trade. Road kills reduce turtle numbers even more.

“Population declines have been documented in many states across the box turtle’s range,” says Lori Erb, turtle conservation biologist with the Massachusetts Division of Fisheries and Wildlife. That decline, reports IUCN, International Union for Conservation of Nature, “probably exceeds 30 percent over three generations.”

Fortunately, gardeners can play a role in nurturing box turtles. Here are a few actions to consider:

• Invite box turtles into your garden by cultivating a plant species native to your region that provide favorite turtle fruits. In sunny areas, encourage dense clusters of brambles and let the ripened berries fall. Choose species that fruit at different times during the season. (But be aware that the turtles have a well-known penchant for raiding vegetable gardens, so erect a small barrier.)

• Terrestrial box turtles are poor swimmers, so be sure your pool is properly fenced in.

• Leave large, continuous areas of natural leaf litter mulch beneath trees on your property so the turtles can remain camouflaged and forage for prey. To provide places where the animals can pass the night or overwinter, build brush piles on top of soft, loose soil by layering branches and leaf litter.

• Any moist area, whether rain garden or damp forest depression, will help turtles survive the hottest parts of the day.

• Provide a large, and preferably isolated, clearing. Box turtles use such areas for traveling, mating and basking. They also lay their eggs in sunny spots.

• Locate all turtle habitat as far as possible from deadly roadways. If you do see a box turtle crossing a street, the best thing to do is to move it carefully to the side of the road, pointed in the direction it was heading.

• Before mowing, walk the area in search of turtles. Mow on a dry day, at midday, when turtles are less likely to be out and about.

Female box turtles can store sperm from a single mating for as long as four years, allowing them to produce eggs for several seasons.


May is Garden for Wildlife Month