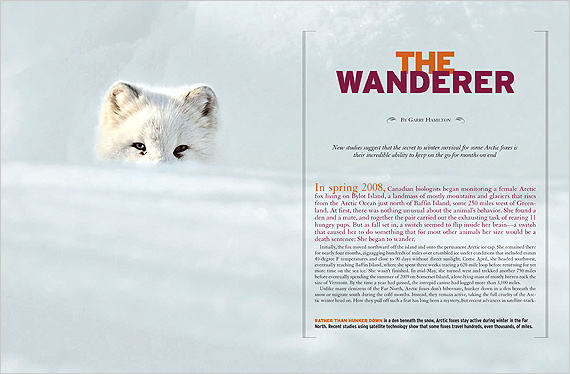 IN SPRING 2008, Canadian biologists began monitoring a female Arctic fox living on Bylot Island, a landmass of mostly mountains and glaciers that rises from the Arctic Ocean just north of Baffin Island, some 250 miles west of Greenland. At first, there was nothing unusual about the animal’s behavior. She found a den and a mate, and together the pair carried out the exhausting task of rearing 11 hungry pups. But as fall set in, a switch seemed to flip inside her brain—a switch that caused her to do something that for most other animals her size would be a death sentence: She began to wander.

Initially, the fox moved northward off the island and onto the permanent Arctic ice cap. She remained there for nearly four months, zigzagging hundreds of miles over crumbled ice under conditions that included minus 40-degree F temperatures and close to 90 days without direct sunlight. Come April, she headed southwest, eventually reaching Baffin Island, where she spent three weeks tracing a 620-mile loop before returning for yet more time on the sea ice. She wasn’t finished. In mid-May, she turned west and trekked another 750 miles before eventually spending the summer of 2009 on Somerset Island, a low-lying mass of mostly barren rock the size of Vermont. By the time a year had passed, the intrepid canine had logged more than 3,100 miles.

Unlike many denizens of the Far North, Arctic foxes don’t hibernate, hunker down in a den beneath the snow or migrate south during the cold months. Instead, they remain active, taking the full cruelty of the Arctic winter head on. How they pull off such a feat has long been a mystery, but recent advances in satellite-tracking technology have finally enabled scientists to monitor the animals’ movements during the nine months of the year when the little predators are otherwise inaccessible.

The first completed studies suggest that, at least for some of the creatures, one secret to survival is their incredible ability to wander. Arctic foxes that decide not to stay in one area during the long winter appear to be true nomads, roaming distances that are continental in scale. “What we’re finding is that for most of the year, the foxes that leave don’t seem to have a home range,” says Dominique Berteaux, a biologist at the University of Quebec at Rimouski who heads the ongoing research on Bylot Island. “There’s no home. It’s all range.”

Records of the species’ unusual behavior date back more than a century. During his failed attempt to reach the North Pole on foot in the spring of 1895, Norwegian explorer Fridtjof Nansen encountered several sets of fox footprints as he crossed the ice cap above the 85th parallel. “What in the world was that fox doing up here?” he wrote in his journal. Nansen, who was heading home at that point, took this sign of life to mean land was near. In fact, he had another three weeks of solid slogging before he reached the remote islands now known as Franz Josef Land. 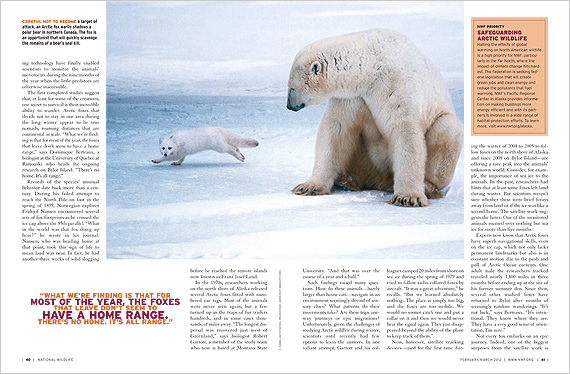 In the 1970s, researchers working on the north shore of Alaska released several Arctic foxes fitted with numbered ear tags. Most of the animals were never seen again, but a few turned up in the traps of fur traders hundreds, and in some cases thousands, of miles away. “The longest dispersal was recovered just west of Greenland,” says biologist Robert Garrott, a member of the study team who now is based at Montana State University. “And that was over the course of a year and a half.”

Such findings raised many questions. How do these animals—barely larger than house cats—navigate in an environment seemingly devoid of sensory clues? What patterns do their movements take? Are these trips one-way journeys or epic migrations? Unfortunately, given the challenges of studying Arctic wildlife during winter, scientists until recently had few options to learn the answers. In one valiant attempt, Garrott and his colleagues camped 20 miles from shore on sea ice during the spring of 1979 and tried to follow radio-collared foxes by aircraft. “It was a great adventure,” he recalls. “But we learned absolutely nothing. The place is simply too big, and the foxes are too mobile. We would no sooner catch one and put a collar on it and then we would never hear the signal again. They just disappeared beyond the ability of the plane to keep track of them.”

Now, however, satellite tracking devices—used for the first time during the winter of 2004 to 2005 to follow foxes on the north shore of Alaska and since 2008 on Bylot Island—are offering a rare peak into the animals’ unknown world. Consider, for example, the importance of sea ice to the animals. In the past, researchers had hints that at least some foxes left land during winter. But scientists weren’t sure whether these were brief forays away from land or if the ice was like a second home. The satellite work suggests the latter. One of the monitored animals roamed over nothing but sea ice for more than five months.

Experts now know that Arctic foxes have superb navigational skills, even on the ice cap, which not only lacks permanent landmarks but also is in constant motion due to the push and pull of Arctic Ocean currents. One adult male the researchers tracked traveled nearly 1,400 miles in three months before ending up at the site of his former summer den. Since then, several other studied foxes have returned to Bylot after months of seemingly random wanderings. “It’s not luck,” says Berteaux. “It’s intentional. They know where they are. They have a very good sense of orientation, I’m sure.”

Not every fox embarks on an epic journey. Indeed, one of the biggest surprises from the satellite work is how dramatically winter behavior varies from one animal to the next. This became clear last winter when Berteaux’s team collared 29 foxes, the largest survey to date. One fox headed south to Baffin Island, tracing a 1,000-mile loop that extended as far as the Canadian mainland. Another headed 40 miles into Bylot Island’s mountainous and largely lifeless interior. A few animals trekked several miles onto sea ice to the west. Others made shorter trips. Almost half never left Bylot Island, and none of the animals engaged in extreme movements like those seen two years earlier. “What we’re finding is that these very long movements are not typical,” says Berteaux. 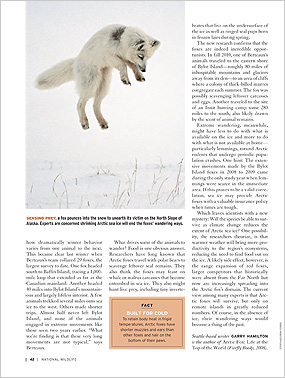 What drives some of the animals to wander? Food is one obvious answer. Researchers have long known that Arctic foxes travel with polar bears to scavenge leftover seal remains. They also think the foxes may feast on whale or walrus carcasses that become entombed in sea ice. They also might hunt live prey, including tiny invertebrates that live on the undersurface of the ice as well as ringed seal pups born in frozen lairs during spring.

The new research confirms that the foxes are indeed incredible opportunists. In fall 2010, one of Berteaux’s animals traveled to the eastern shore of Bylot Island—roughly 80 miles of inhospitable mountains and glaciers away from its den—to an area of cliffs where a colony of thick-billed murres congregate each summer. The fox was possibly scavenging leftover carcasses and eggs. Another traveled to the site of an Inuit hunting camp some 280 miles to the south, also likely drawn by the scent of animal remains.

Extreme wandering, meanwhile, might have less to do with what is available on the ice and more to do with what is not available at home—particularly lemmings, rotund Arctic rodents that undergo periodic population crashes. One hint: The extensive movements made by the Bylot Island foxes in 2008 to 2009 came during the only study year when lemmings were scarce in the immediate area. If this proves to be a valid correlation, sea ice may provide Arctic foxes with a valuable insurance policy when times are tough.

Which leaves scientists with a new mystery: Will the species be able to survive as climate change reduces the extent of Arctic sea ice? One possibility, the researchers theorize, is that warmer weather will bring more productivity to the region’s ecosystems, reducing the need to find food out on the ice. A likely side effect, however, is the range expansion of red foxes, larger competitors that historically were absent from the Far North but  now are increasingly spreading into the Arctic fox’s domain. The current view among many experts is that Arctic foxes will survive, but only on remote islands in greatly reduced numbers. Of course, in the absence of ice, their wandering ways would become a thing of the past.

To retain body heat in frigid temperatures, Arctic foxes have shorter muzzles and ears than other foxes and hair on the bottom of their paws.

Seattle-based writer Garry Hamilton is the author of Arctic Fox: Life at the Top of the World (Firefly Books, 2008).

Halting the effects of global warming on North American wildlife is a high priority for NWF, particularly in the Far North, where the impact of climate change hits hardest. The Federation is seeking federal legislation that will create green jobs and clean energy and reduce the pollutants that fuel warming. NWF’s Pacific Regional Center in Alaska provides information on making buildings more energy efficient and with its partners is involved in a wide range of habitat-protection efforts.