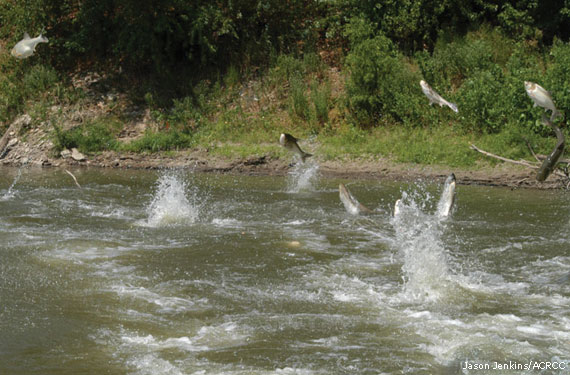 For nearly half a century, NWF has been working to protect the Great Lakes region, which comprises almost 20 percent of the world’s surface freshwater and supplies drinking water to more than 40 million area residents. Since 2004, the Federation has cochaired the Healing Our Waters–Great Lakes Coalition, a partnership of more than 120 national, state and local conservation organizations that led the national campaign for Great Lakes restoration funding.

During the past eight years, NWF also has played a leading role in passage of two significant measures: the Great Lakes Water Resources Compact and the Great Lakes Restoration Initiative. The initiative has provided more than $1 billion in federal money to clean up toxic hot spots, target the lakes’ more than 180 invasive species and address other environmental threats. The compact protects the lakes from water depletion by banning water diversions outside the Great Lakes region and by requiring wise water use.

“This is an unprecedented and historic time in the restoration of this vast and biodiverse region,” says Andy Buchsbaum, NWF regional executive director for the Great Lakes region. Among the organization’s other recent actions:

• The Federation is seeking to close gaps, inconsistencies and loopholes in U.S. state and Canadian provincial laws that leave the Great Lakes vulnerable to a new wave of mining activity.

• In April of this year, NWF issued a legal analysis revealing that federal laws governing oil pipelines do not adequately protect the Great Lakes and surrounding communities from petroleum-pipeline spills and that Great Lakes states have not passed their own laws to fill in the gaps. The region was subject to 277 hazardous-liquid pipeline accidents between 2007 and 2011, resulting in more than $893 million of property damage.

• In May, the Federation released another report, detailing the threat posed to the lakes by sulfide mining, which produces toxic waste devastating to the habitats of fish and other wildlife.

• Previous NWF reports have examined a wide range of other issues in the region, including a 2011 study documenting new and massive ecosystem breakdowns in the Great Lakes caused by interactions between excessive fertilizer runoff from farms and invasive zebra and quagga mussels.

Without your help, NWF could not succeed in its efforts to protect the Great Lakes’ resources. In 2011 alone, Federation members contributed $194,000 to those efforts. To learn more, visit www.nwf.org/greatlakes.

Expert reviewers of the charity-rating organization Philanthropedia have identified NWF as a “high impact” leader in educating about climate change. One reviewer stated that NWF focuses on “environmental education at all age groups. … This is crucial if we are to educate the next generation of environmental leaders.” Find out about NWF’s work on climate change at www.nwf.org/globalwarming. 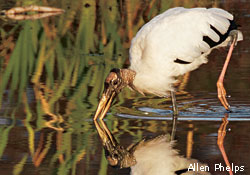 After a decade of negotiations, NWF, its state affiliate Florida Wildlife Federation and other conservation partners have prevented a proposed residential area from destroying hundreds of acres in Florida’s ecologically sensitive Everglades. The settlement with the Mirasol developer reduces the project’s footprint in the Cocohatchee Slough, restores or enhances about 1,125 acres of preserve and returns an additional 1,000 acres of nearby farm fields to wetlands.

This latest settlement follows one in 2010 that also restricted development in the same slough. Its water flows from Audubon’s Corkscrew Swamp Sanctuary, home to the United States’ largest wood stork (right) nesting rookery. This wetland also helps protect against flooding and filters groundwater. In total, these settlements have permanently protected about 3,500 acres of wetland habitat.

The groups’ work is not done, however. Jan Goldman-Carter, NWF’s water resources counsel, says, “There remain shortcomings in state and federal wetland regulatory reviews, including inaccurate accounting of wetland values, which we continue to work to correct.” Go to www.nwf.org/water to find out more about NWF’s efforts to protect vital wetlands.

NWF and its partner Greater Washington Interfaith Power and Light have launched Sacred Grounds, a year-long pilot project to create wildlife habitat at faith-based institutions and generate interest among their congregants in conserving the environment.

This year-long project, being tested at two churches and one synagogue in the Washington, D.C., metropolitan area, will serve as a foundation for what program leaders hope will become a national extension of NWF’s Certified Wildlife Habitat® program.

NWF staff is providing technical guidance and training up to 10 volunteers at each site. Once the habitats are complete, NWF also will host webinars for the pilot congregations to promote creation of wildlife habitat at other faith-based institutions. The U.S. National Park Service is providing financial support. The project builds on a similar program that NWF’s state affiliate North Carolina Wildlife Federation offers.

“This is a great opportunity for people of faith to connect to nature at their place of worship and to how their doctrines encourage them to be good environmental stewards,” says Naomi Edelson, NWF’s director of state and federal wildlife partnerships.

To learn how to create wildlife habitat at your house of worship, go to www.nwf.org/nwfgarden or e-mail edelsonn@nwf.org. 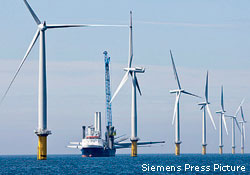 A U.S. offshore wind industry could create hundreds of thousands of jobs while powering homes and businesses with local, clean energy, concludes The Turning Point for Atlantic Offshore Wind Energy, an NWF report that was released by more than 45 partner organizations and NWF affiliates. The report details the industry’s progress in the United States to date and actions needed to make it a reality.

The authors state that harnessing just 4 percent of the wind energy available in the Atlantic Ocean could power roughly 14 million homes, create about 300,000 jobs and generate more than $200 billion in economic activity.

“America must move forward with responsibly sited clean energy development if we are to protect wildlife from the dangers of climate change,” says Catherine Bowes, NWF’s senior manager for new energy solutions and lead author of the report. “We must take advantage of this golden opportunity to make our electricity supply cleaner, more wildlife friendly and more secure.”

The report stresses the need for policies to prioritize clean wind energy and strong measures that would protect wildlife as the industry grows. Learn more about NWF’s work to promote responsible offshore wind energy and download the report from www.nwf.org/offshorewind.

Would you like to create a compelling nature playspace in your backyard? A new guide offers parents and caregivers simple, step-by-step instructions how to build engaging play spaces that inspire children to go outdoors and explore nature.

The Nature Play at Home: A Guide for Boosting Children’s Healthy Development and Creativity, by NWF and the Natural Learning Initiative at North Carolina State University, offers tips such as:

• Gather sticks, leaves and grasses already in a yard to build intriguing structures such as a fort, hideout or den.

• Use a hollow log, planter or corner of the yard to make a miniature fairy village.

• Make your yard into a Certified Wildlife Habitat® site by providing food, water, nesting places and shelter for wildlife. There, children can learn to garden through hands-on activities and observe the wide array of wildlife that frequents a native garden.

The report includes a section on “small-space solutions,” showing that even patios and balconies can become welcoming areas for kids to connect with nature.

Introduce your 4- to 7-year-olds to the amazing world of animals through a new print magazine called Ranger Rick Jr.™ Ricky Raccoon teaches about wildlife, much as Ranger Rick® has done for more than 45 years. Ricky is also in Ranger Rick Jr. Appventures™, a new iPad app that features interactive stories, fun games and creative activities. Go to www.nwf.org/kids.

Your Unexpected Journey with Nature

NWF is teaming up with Warner Bros. Pictures, New Line Cinema and Metro-Goldwyn-Mayer Pictures (MGM) for the Academy Award®-winning filmmaker Peter Jackson’s The Hobbit: An Unexpected Journey, the first in a trilogy of films adapting the enduringly popular novel The Hobbit by J.R.R. Tolkien. The film opens in theaters December 14.

As the education partner for the film, NWF will encourage students and adults to take actions to “green their shires,” or their own communities, through NWF programs such as Certified Wildlife Habitat®. “We hope the popularity of the film series and the themes of courage and nature’s beauty will inspire moviegoers and Tolkien fans to do something to make our Earth a greener place,” says Carey Stanton, NWF’s senior director for education.

Download NWF’s official movie poster and educator guide and learn about contests and other fun activities you can do now at www.nwf.org/thehobbit. To preview the trailer and for more information about the film, visit www.thehobbit.com.

How do you answer the questions your child or student will inevitably ask about climate change in a manner that doesn’t frighten or overwhelm them? Send them to Climate Classroom Kids. NWF and Howard Ruby, award-winning nature photographer and chairman of Oakwood Worldwide, developed this interactive website to provide concise, accurate information in hopeful ways that anyone age 9 and older can understand.

The website’s photo galleries and activity guides are free for educators, parents and youth who want to teach or learn more about amazing animals, the effects of climate change on wildlife and habitat, and how to take actions to reduce carbon pollution that leads to global warming. The site also features fun games and activities, including some that kids can do outdoors.

The website and curricula Polar Bears and the Arctic, Penguins and Antarctica and Parrots and Tropical Forests are brought to life with Ruby’s stunning wildlife photography from every continent. See these images and all the site has to offer at www.climateclassroomkids.org.