Do Hawaiian Monk Seals Have a Prayer? 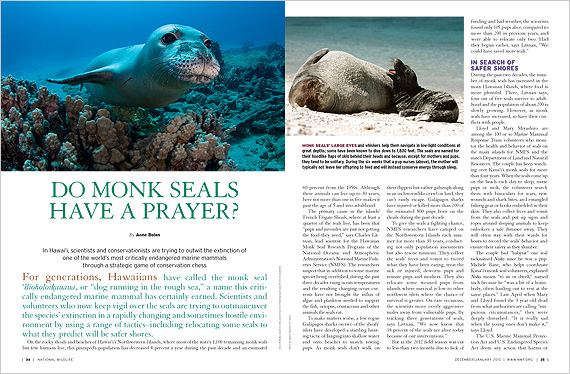 FOR GENERATIONS, HAWAIIANS HAVE CALLED THE MONK SEAL ‘īlioholoikauaua, or “dog running in the rough sea,” a name this critically endangered marine mammal has certainly earned. Scientists and volunteers who now keep vigil over the seals are trying to outmaneuver the species’ extinction in a rapidly changing and sometimes hostile environment by using a range of tactics–including relocating some seals to what they predict will be safer shores.

On the rocky shoals and beaches of Hawai‘i’s Northwestern Islands, where most of the state’s 1,100 remaining monk seals but few humans live, this pinniped’s population has decreased 4 percent a year during the past decade and an estimated 60 percent from the 1950s. Although these animals can live up to 30 years, here not more than one in five makes it past the age of 5 and into adulthood.

The primary cause in the islands’ French Frigate Shoals, where at least a quarter of the seals live, has been that “pups and juveniles are just not getting the food they need,” says Charles Littnan, lead scientist for the Hawaiian Monk Seal Research Program of the National Oceanic and Atmospheric Administration’s National Marine Fisheries Service (NMFS). The researchers suspect that in addition to some marine species being overfished, during the past three decades rising ocean temperatures and the resulting changing ocean currents have not brought the influx of algae and plankton needed to support the fish, octopus, crustaceans and other animals the seals eat.

To make matters worse, a few rogue Galápagos sharks on two of the shoals’ islets have developed a startling hunting tactic of lunging into shallow water and onto beaches to snatch resting pups. As monk seals don’t walk on their flippers but rather galumph along in an inchwormlike crawl on land, they can’t easily escape. Galápagos sharks have injured or killed more than 200 of the estimated 800 pups born on the shoals during the past decade.

To give the seals a fighting chance, NMFS researchers have camped on the Northwestern Islands each summer for more than 30 years, conducting not only population assessments but also rescue missions. They collect the seals’ feces and vomit to record what they have been eating, treat the sick or injured, deworm pups and reunite pups and mothers. They also relocate some weaned pups from islands where survival is low to other northwest islets where the chance of survival is greater. On rare occasions, the scientists move overly aggressive males away from vulnerable pups. By tracking three generations of seals, says Littnan, “We now know that 18 percent of the seals are alive today because of our interventions.”

But as the 2012 field season was cut to less than two months due to lack of funding and bad weather, the scientists found only 105 pups alive, compared to more than 200 in previous years, and were able to relocate only two. Had they begun earlier, says Littnan, “We could have saved more seals.”

In Search of Safer Shores

During the past two decades, the number of monk seals has increased in the main Hawaiian Islands, where food is more plentiful. There, Littnan says, four out of five seals survive to adulthood and the population of about 200 is slowly growing. However, as monk seals have increased, so have their conflicts with people.

Lloyd and Mary Miyashiro are among the 100 or so Marine Mammal Response Team volunteers who monitor the health and behavior of seals on the main islands for NMFS and the state’s Department of Land and Natural Resources. The couple has been watching over Kaua‘i’s monk seals for more than four years. When the seals come up on the beach each day to sleep, nurse pups or molt, the volunteers search them with binoculars for scars, new wounds and shark bites, and entangled fishing gear or hooks embedded in their skin. They also collect feces and vomit from the seals and put up signs and ropes around sleeping animals to keep onlookers a safe distance away. They will often stay with their wards for hours to record the seals’ behavior and ensure their safety as they slumber. 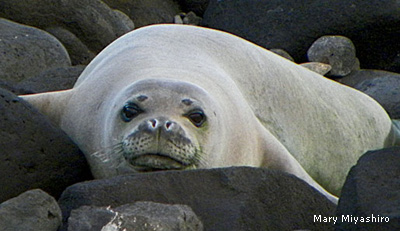 The couple had “babysat” one seal nicknamed Noho (above) since he was a pup. Michele Bane, who helps coordinate Kaua‘i’s monk seal volunteers, explained Noho means “to sit or dwell,” named such because he “was a bit of a homebody, often hauling out to rest at the same places.” Last April when Mary and Lloyd found the 3-year-old dead from what authorities are calling “suspicious circumstances,” they were deeply disturbed. “It is really sad when the young ones don’t make it,” says Lloyd.

The U.S. Marine Mammal Protection Act and U.S. Endangered Species Act deem any action that harms or harasses the seals illegal. Yet Noho was the seventh seal—four on Kaua‘i and three on Moloka‘i—suspected to have been killed illegally in the past four years. Of these, four were confirmed gunshot victims. So far, only one person has been convicted for the killings: a man who shot a pregnant female on Kaua‘i in 2009.

Recent plans to help these endangered animals may have inadvertently fanned the flames of conflict. Prompted by a petition from conservation organizations and new information about how and where monk seals forage and live, NMFS recently proposed expanding offshore areas designated as monk seal critical habitat in the Northwestern Islands and designating new critical habitat in the main islands. The proposal won’t prevent people from enjoying the ocean, says Rachel Sprague of NMFS’s Hawaiian Monk Seal Recovery Program: “What it will do is encourage federal agencies to consider where they are planning to put in a new project and how that project might impact important habitat for monk seals.”

NMFS researchers also wish to temporarily relocate up to 20 weaned female pups each year from the Northwestern Islands to the main islands. The main islands would serve as a “nursery school, where the seals can learn to avoid predators yet be able to feed well,” says Littnan. “Once you run that gauntlet of zero to three years of age, you have the skill set you need to survive.” Then, before the seals become reproductively active, they would be returned to their Northwestern Islands.

This nursery area may be critical in the years to come. Littnan says rising sea levels from climate change already have swallowed pupping and breeding grounds in the Northwestern Islands. One of the most important of these sites, Whale-Skate Island, was submerged in 1998, and other islands are beginning to erode. Even so, NMFS will not be relocating all the monk seals to the main islands. “We don’t want all our reproductive eggs in one basket,” explains Littnan.

Not everyone is welcoming the seals, however. During a public comment period on the proposals in 2011, Tony Costa of the Hawai‘i Nearshore Fishermen wrote: “We are certain that the creation of a Monk Seal Protection Industry in the MHI [main Hawaiian Islands] would displace not only island nearshore fishermen, but it would also have other negative economic impacts for other various ocean communities.”

Marjorie Ziegler, executive director of NWF’s affiliate Conservation Council for Hawai‘i (CCH), says the critical habitat designation would actually help fishermen. “When a project is proposed that could be detrimental to fisheries within designated critical habitat, fishermen would have a tool to oppose that project.”

“Fishermen and other folks are worried that monk seals are moving across the bottom of the ocean like a plague of locusts, eating 600 pounds of fish a day. That’s just physically not possible,” says Littnan. Cameras attached to seals in the French Frigate Shoals from 1997 to 2000 have shown that the animals spend a lot of time flipping over rocks on the seafloor or scrutinizing coral reefs searching for food, often only to have their meals stolen by stalking jacks and sharks. Rather, Littnan says, an average adult seal of 300 pounds eats about 15 to 24 pounds a day.

“Monk seals are scapegoats for nearshore fishing problems that have nothing to do with them,” says Trisha Kehaulani Watson, a consultant NMFS hired to get feedback from main island communities on how monk seals and humans can coexist.

Although scientists have stated monk seals were found in the Mediterranean at least 12 million years ago, when they diverged into the Caribbean monk seal and then another species that swam to the Hawaiian Islands, some residents have suggested that the monk seal isn’t native to Hawai‘i because few fossil remains have been recovered. “That is simply not true,” responds Julie Leialoha, CCH’s vice president and a marine biologist. “The seal is part of our culture. It is part of our history. It is Hawaiian.” Watson’s website Nā Mea Hulu, or “the furry ones,” says that the monk seal is mentioned in the native Hawaiian origin chant The Kumulipo. It also features citations of native language newspapers dating to 1859 that mention seals, before sealers nearly hunted them to extinction in the late 1880s. 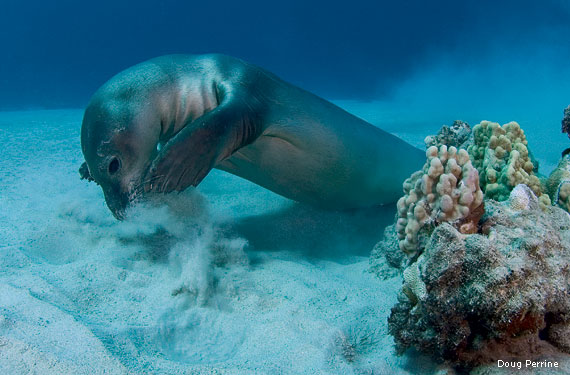 Some Pacific Islanders have a saying that when people tell their own truth, they “talk story.” Soon the seals will have the opportunity to do just that.

This fall, Littnan’s team began work with the Monk Seal Foundation and other organizations to once again strap video cameras onto seals’ backs to record how and on what they are foraging. But this time the seals are around Moloka‘i and Kaua‘i, and local high school students will help analyze the seals’ behavior and present the video of their actions to island communities. The partnership hopes to have some video of the seals to present by the end of the year, when the final decision on the proposed critical habitat is expected.

Residents also will be able to learn about their seals at a branch hospital of The Marine Mammal Center (TMMC) of California, scheduled to open in 2013 on the Big Island of Hawai‘i. The new hospital, dedicated solely to treating monk seals, will feature a public education center because, says TMMC’s Senior Scientist Frances Gulland, “We want to tell how important each animal is and that shooting them is detrimental to the species.”

Retired high school teacher Lloyd Miyashiro agrees, saying what is needed is “recruitment of local volunteers and public education” to prevent more seals from being killed. As has been said, “Every time a seal dies, a part of Hawai‘i dies, too.”

A Kāhea: A Call to Action

NWF and its state affiliate the Conservation Council for Hawai‘i (CCH) have joined other conservation organizations to ensure full federal funding for monk seal recovery efforts and to dispel myths about these animals. NWF’s Pacific Region Associate Director Les Welsh says, “The monk seal is a native species deserving of Hawaiian and national pride as well as our full protection, including providing designated critical habitat.”

As members of the Aloha Kanaloa Coalition, NWF and CCH are increasing awareness of the monk seals’ plight. See the public service announcement at www.alohakanaloacoalition.org and www.nwf.org/hawaiianmonkseal for more information about these endangered animals.