With these native plants, you can feed wildlife and enjoy the fruits of your labor during holiday meals and other times 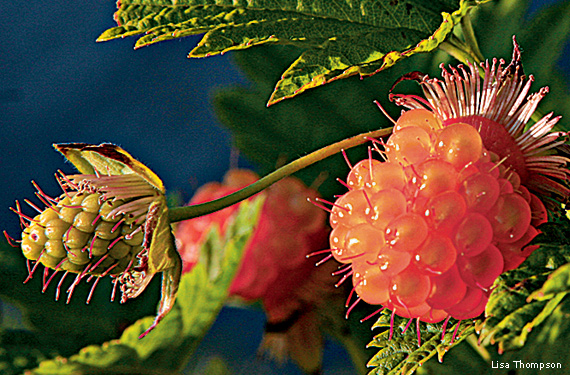 IT'S HARD TO IMAGINE a Thanksgiving meal in New England without the traditional dollop of cranberry sauce. For many southerners, holiday celebrations would be incomplete without a bowl of warm persimmon pudding. We may not think of these fruits as being as “American as apple pie,” but in fact both were flourishing on this continent long before early European settlers imported the first apples to our shores. Cranberries, persimmons and other native fruits are among the true American originals. They’re also the epitome of “locally grown.”

As we increasingly strive to feed ourselves sustainably, there’s no better place to start than with homegrown native fruits—from blueberries in Maine and scuppernongs in North Carolina to red raspberries in California. We wouldn’t be the only ones to reap the benefits—wildlife love to feast on these fruits, too.

Following are 10 American originals you can grow in your garden come next spring and then enjoy the fruits of your labor during holiday meals and other times. Now is a good time to begin making plans. To be certain you are not introducing a plant that might be invasive in your area, look for species that are native to your region. Keep in mind that the cultivated varieties available at local nurseries are not necessarily the best choice—their fruits may be bigger, but they’re often less tasty than the native species and may be less attractive to wildlife.

Blueberries: While cultivated varieties have been developed from the highbush blueberry, which grows wild in the East and Midwest, other blueberry species are native to most of the United States and Canada. The shrubs produce small flowers that are important spring nectar sources for bees while their intense, sweet-tart flavored berries are relished by many birds and mammals.

Serviceberries: Some species of serviceberry—also known as Juneberry, shadbush or Saskatoon—is native to every contiguous U.S. state and Canadian province. The large shrubs or small trees feature delicate white flowers on bare branches in spring that provide nectar for insects emerging from winter nests. The small, purple fruits help sustain grosbeaks, thrushes and many other birds during the breeding season. If you can get to them before the birds, the uniquely flavored berries can be used to make jam or pie.

Cranberries: These Thanksgiving staples grow on low shrubs in the northeastern, mid-Atlantic and midwestern states and farther south in the Appalachian Mountains. The tart red fruits also are attractive to birds. Most people assume that cranberries can’t be grown at home because they require habitat that is permanently wet. Commercial growers flood cranberry fields to make harvesting easier, but you don’t need a bog. Cranberries do benefit from moist soil and lots of compost.

American Persimmons: Native from Connecticut to Iowa and Kansas south to Florida and Texas, American persimmon trees produce ornamental, purplish-orange fruits that hang on leafless branches in autumn. Before they ripen, the fruits are guaranteed to make your mouth pucker. But when ripe, they taste a lot like dates. Wild persimmons are an important fall and winter food for many mammals, and the trees are a larval host plant for the luna moth.

Pawpaws: Producing the largest edible fruit of any North American native plant, pawpaw shrubs or small trees range from New York to Iowa and south from Florida to Texas. Up to 6 inches long and shaped similar to potatoes, the fruits turn yellow and black when ripe in the fall. They have a custardlike consistency and taste like a combination of mango, banana and pineapple. Birds and certain mammals feed on the fruits, and the trees are the host plant of zebra swallowtail butterflies.

Elderberries: These shrubs produce pyramidal or flat-topped flower clusters that can be as big a Frisbee. Native throughout much of the United States and Canada, they are pollinator magnets. The flowers eventually sprout into clusters of small red or dark purple berries that are gobbled up by birds and mammals. Though inedible to us when raw, cooked elderberries make a tangy pie, wine or jelly.

Wild Grapes: Few native fruits rival the wildlife value of wild grapes, which not only provide food but also nesting places for many birds in their tangled vines. Native to every contiguous U.S. state and from Nova Scotia west to Manitoba in Canada, wild grapes typically are smaller but much more flavorful than cultivated varieties. Two prized species are the northern fox grape, source of the famous Concord variety, and the scuppernong, a native of the South that can survive scorching temperatures and produce as much as 30 pounds of fruit yearly. The rampant vines can smother trees, so grow them on an arbor. 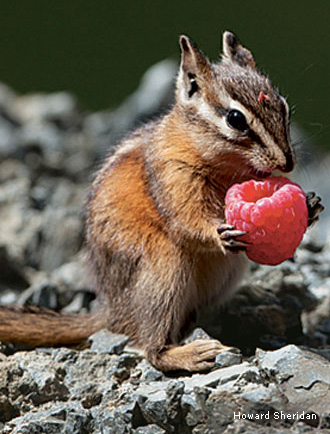 Raspberries, Blackberries and Salmonberries: These and other native brambles—shrubs that send up arching stems called canes—are perfect garden plants. They’re usually easy to grow and because they’re highly perishable, the fruits can be hard to find in supermarkets. Birds and mammals feed on them, while the flowers provide nectar for pollinators and the leaves are an essential food source for skipper butterfly larvae. A number of nonnative brambles have become invasive, so grow only local species.

The red raspberry is native to every region of the Lower 48 except the Deep South. The black raspberry ranges throughout the East as far south as Georgia and from North Dakota south to Colorado and Oklahoma. The common, or Allegheny, blackberry grows in the Northeast and Midwest and south to Virginia and Missouri. California blackberry, also called dewberry, is native to the Pacific Northwest.

The salmonberry is a favorite of western hummingbird species. In spring, migrating rufous hummingbirds follow the wave of the plants’ unfolding pink flowers northward from California to Alaska. Named for their resemblance to salmon roe, the fruits taste best when they are salmon- or amber-colored.

Native plant suppliers can provide details on how to grow these and other native fruits. Check the Lady Bird Johnson Wildflower Center’s national suppliers’ database for sources of the plants in your region. Other good sources of growing information are the websites of agricultural school programs such as Cornell University’s Department of Horticulture and Kentucky State University’s Pawpaw Program.

Discover how to create an NWF Certified Wildlife Habitat®.