Photographer Steven Kazlowski has spent 13 years capturing images of polar bears, learning many of their secrets and the dangers they 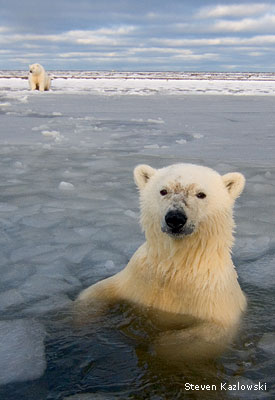 WHEN I DECIDED TO BECOME A WILDLIFE PHOTOGRAPHER nearly 20 years ago, I found both the solitude and the animals I was looking for in the Alaskan Arctic. During my first six years there I saw many native species—grizzly bears, musk oxen, Arctic foxes—but I hadn’t encountered polar bears. I never even planned to photograph these animals, yet I have now spent more than 13 years capturing images of them in their natural habitat.

I first photographed polar bears around an Iñupiat Eskimo village of 300 residents on the eastern Alaskan Arctic coast. Initially I set up camp in a hut belonging to Alaska Telecom, the North Slope phone company. The hut was a freezerlike container on stilts filled with computers but offered enough room to roll out my sleeping bag on the floor. It had one very attractive feature: ample heat. I spent three weeks there before I was adopted by the owners of a local hotel.

Along the coast I saw polar bears swimming up like crocodiles from every direction and emerging from the water as huge, lumbering land animals. They would feed on a whale carcass, play and curiously check me out. At the end of the fall season, as the ocean froze over, it was time for them to move on.

At that point I was hooked on the bears, which led me to explore the rest of Alaska’s Arctic coast. To learn about and get around on the ice, I needed help from people who have for generations spent their lives on it. To my surprise and continuing gratitude, the Iñupiat welcomed me into their communities. Hunting with them, I learned how to live in temperatures of minus 50 degrees F and how to use drifting snow as a compass: In parts of that country, the wind blows in a certain direction most of the time, so you usually know which way is which.

In the early 1990s I completed a degree in marine biology and combined that background with wildlife photography to shape the theme of my career: how climate change and industrialization are affecting the Arctic and jeopardizing polar bears in particular. I travel around the United States conducting educational outreach on polar bears and Arctic environments through a partnership with one of my publishers, Braided River, appearing on ABC’s Good Morning America and various National Public Radio programs nationwide.

My goal is to create awareness and promote conservation of natural environments by making striking images that connect people to places and animals. I still find time to spend more than six months each year photographing the Alaskan Arctic. My newest book, Bear Country: North America’s Grizzly, Black, and Polar Bears (The Mountaineers Books, Seattle, Washington) was published last September. Following are some of my favorite images with the stories behind how I made them. 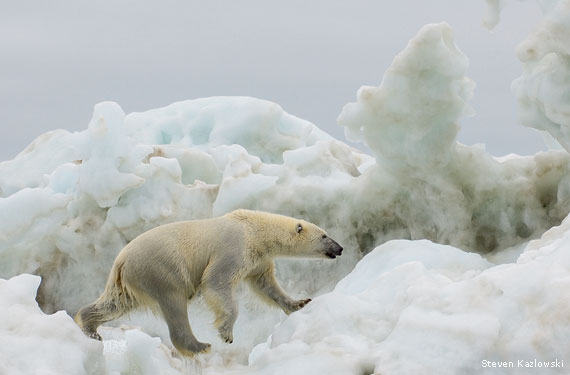 Huge rafts of ice, like the one this polar bear is crossing, traditionally have served as the species’ summer habitat. In 2007, when this photo was taken, daytime temperatures were in the balmy mid 30 degrees F. Loss of sea ice was so great I had to travel in a motorboat hundreds of miles up and down the coast before finding this bear on the outer reaches of Camden Bay, off the coast of the Arctic National Wildlife Refuge, the only place polar bears den in the United States. Oil companies want to drill in summer in the Camden Bay area. 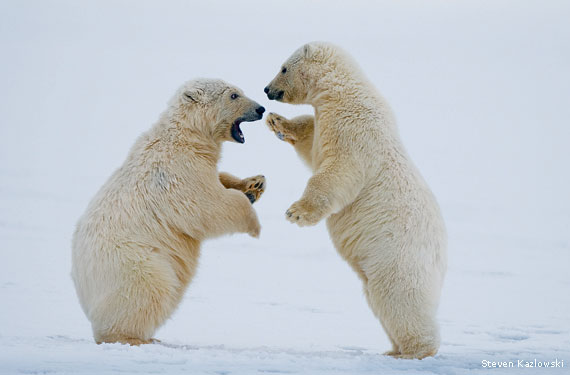 The two 9-month-old cubs in this image are testing their skills by playing. I have spent thousands of hours watching polar bears learn through play. Often I have seen mothers and other young females playing with and watching cubs of other mothers. The bears act like a nomadic clan, coming together when food is localized and spreading apart when it is dispersed. Cubs can spend up to three years with their mothers, but it appears to me that an offspring will often interact with its mother throughout its lifetime. 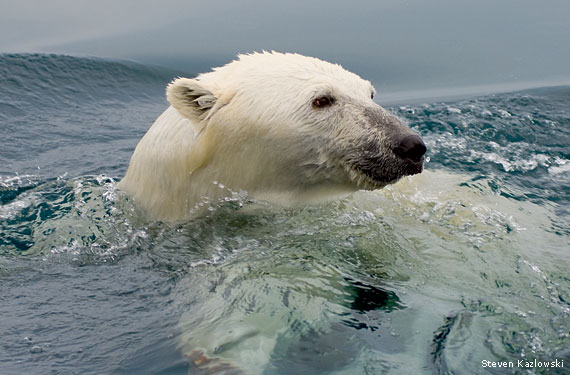 Polar bears potentially can swim for hundreds of miles in open seas, but they did not evolve to do so. This bear was traveling from ice floe to ice floe in waters about 10 miles off the Arctic National Wildlife Refuge, hunting seals, when I took its photo from a boat. Loss of sea ice to climate change is forcing bears to swim across huge expanses of open water. Many drown, such as four females the U.S. Geological Survey found floating dead after a summer storm in 2004. In 2011, a collared female swam 426 miles in nine days with her young cub, losing 22 percent of her body weight in a search for ice. The cub died. Continued loss of ice from a warming climate and the potential for oil development in Arctic waters and along the coast could be disastrous for polar bears. 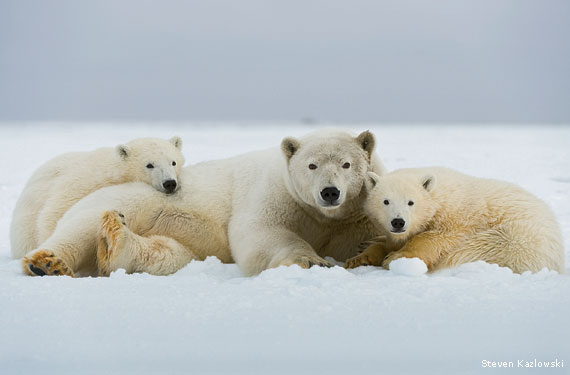 I am always amazed at how these animals amaze me. This 2010 image shows an adult sow that had a broken back leg when she showed up the year before extremely skinny. There was talk in the village of putting her down, but nobody did. She left in fall 2009 with the ice, extremely full from the remains of a whale. The following summer she returned with the two yearling cubs in the photo and then reappeared in fall 2011 with the same cubs. She might not have fared so well had she broken a front leg. Polar bears sometimes lie outside a seal hole and use front paws to grab a seal coming up for air. When polar bears swim, they use front paws as power and back legs as rudders. 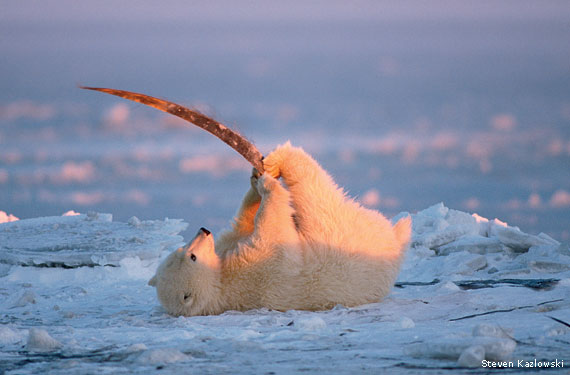 I took this photo on the last frame of a roll of 36-exposure Fuji film 13 years ago. It has always been one of my favorite images because of its light and composition as well as the cub’s pose with a strip of whale baleen. I had an unfortunate incident a few days before I shot this picture. While I was siphoning gas from a plane to earn my keep at a local hotel, I ingested some aviation gas, which made me deathly sick for some time. I still found the fortitude while coughing up blood to go out in this incredible light and make this image. To me this photo is the essence of a great image, as the odds are always stacked against you in one form or another when you are creating pictures.

By the end of this century, 20 to 30 percent of the world’s plant and animal species will face extinction because of global warming. A leading poster child for this threat is the polar bear. The U.S. Geological Survey projects that melting of the bear’s key hunting habitat, sea ice, will cut the species’ population by two-thirds before 2050. NWF and its partners work to safeguard polar bears and other wildlife and their habitats by advocating for national and international policies and legislation that will cut greenhouse-gas emissions, including reductions in carbon pollution from fossil fuels and shifting the United States to a clean-energy economy. As part of its educational efforts, NWF has published several reports on climate change. To learn more and find out how you can help, visit www.nwf.org/globalwarming

Stephen Kazlowski lives in and travels frequently from Washington State to Alaska, photographing the natural world.