Trout are returned to a once-polluted Pennsylvania waterway, showing habitat restoration may not be out of reach 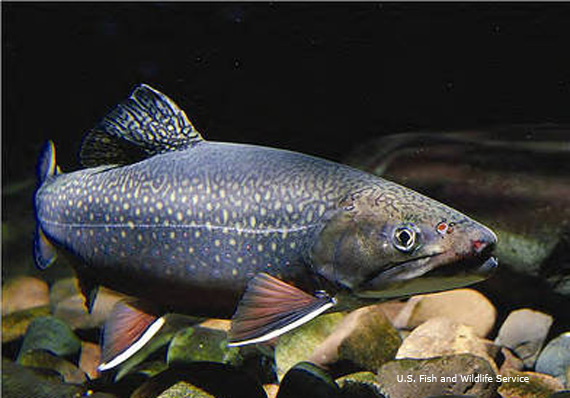 HOW LONG DOES IT TAKE to do the impossible? I ponder this question because many of the challenges conservationists face today seem overwhelming and, at times, impossible to solve. The U.S. Navy Seabee Memorial at the entrance to Arlington National Cemetery in Virginia preserves a World War II motto: “The difficult we do immediately. The impossible takes a little longer.” I was reminded of the motto when I learned that trout were being stocked this spring in the 33 miles of the Bennett Branch Sinnemahoning Creek, a once heavily polluted waterway partly in central Pennsylvania’s Elk County.

I first visited the county when I was 15 to see a small elk herd. I stopped at the village of Grant, so named because former President Ulysses S. Grant fished at this spot in the 1880s. He must have enjoyed the pristine waters as the river wound its way through the virgin forests covering the Allegheny Plateau. When I stopped by, I was struck by the orange color of polluted Bennett Branch.

Not long after Grant’s visit, loggers cut down the forests, leaving desolated hillsides in their wake. At about the same time, a number of “drift mine” operators began extracting the area’s bituminous coal to fuel Pittsburgh iron mills. During the next 100 years, the mines produced nearly a half-billion gallons a day of highly acidic wastewater, contaminating the entire Bennett Branch.

After many of the miners abandoned their operations, conservationists purchased about 70 percent of the local watershed, reclaiming it as state forests and game lands. Armed with a $500-million-dollar bond fund, Pennsylvania sportsmen and women waged a successful campaign in the 1960s and 1970s to regulate active mines and to begin removing scars from abandoned sites. Engineers studying the extensive mining damage concluded that restoring the Bennett Branch would be impossible. But some citizens refused to give in.

With the passage in 2003 of a statewide restoration program called the Growing Greener Coalition, the Western Pennsylvania Conservancy, along with the Rocky Mountain Elk Foundation, acquired old mine sites and worked with the Bennett Branch Watershed Association and P&N Coal Company to restore a major tributary to the Bennett. The following year Pennsylvania’s Bureau of Abandoned Mine Reclamation began working with these and other nonprofit partners to restore water quality in the region. Since then, more than 1,000 acres of the area’s old mining sites have been reclaimed, and an upgraded water-treatment plant has been restoring the Bennett Branch to conditions not seen since President Grant fished there.

The restoration project is producing many local economic and social benefits. More and more anglers gather to fish there, and the area’s renewed forests are attracting other outdoor enthusiasts who come to see an elk herd that now numbers about 800 animals.

I share this story to encourage you to be stubborn. Many of the people who dreamed of restoring Bennett Branch, including the late Marion Brooks, Lenny Green and Ralph Abele, never lost hope. We are the beneficiaries of that hope and of the aspirations of the many volunteers who continue to work on this tributary of the Chesapeake Bay watershed. If you are working on restoring your special place in nature, whether it’s your own backyard habitat or a nearby stream, do not give up.

I also share this story as a warning. Restoring the Bennett Branch cost taxpayers nearly $50 million. Environmental regulations are essential to prevent this kind of abuse. I am saddened to see that the governor of Pennsylvania and the state legislature recently passed Act 13, allowing the gas industry to run roughshod over local zoning, pump hundreds of millions of gallons of Commonwealth waters deep into shale deposits, and fragment and devastate vast areas of forests with poorly regulated fracking operations. Those who reap the profits of these operations will one day leave a massive amount of damage with which the next generation must cope. Did we not read the minutes of the last generation? Does history need to repeat itself?

The same pattern of abuse is happening elsewhere in this country where fossil-fuel energy is being developed. We must stop the widespread practice of privatizing profits while socializing the ecological costs. Miners and oil and gas drillers must be held responsible for their damage. They should not be allowed to leave the environmental scars for the taxpayers to clean up.

NWF has long fought for sound energy development on public lands, and it works with hundreds of local and regional organizations to take on “impossible” projects. Your continued support is essential to our shared cause. Together, we can achieve the impossible. It just might take a little longer.

Our Fight for the Public Lands and Renewable Energy Act
NWF at Work: Mining Loopholes
An Otterly Amazing Comeback