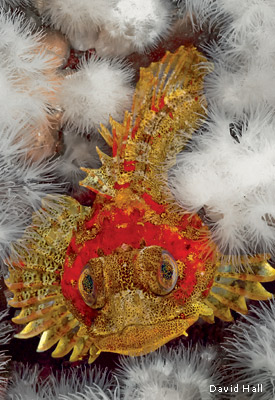 THE BEAUTY OF FLAWLESSLY EXECUTED UNDERWATER PHOTOGRAPHS seldom reflects the extreme technical difficulty or environmental obstacles that had to be overcome to make the images. Divers are limited in their underwater working times by their finite air supply, typically less than an hour. What’s more, every minute they are submerged, their bodies absorb increasing amounts of nitrogen, some of which must be safely released upon ascent if they are to avoid the painful, possibly crippling effects of decompression sickness.

Additionally, as divers descend ever deeper, the ambient pressure mounts and the nitrogen in their air supplies has a progressive narcotic effect on their thought processes. So in an endeavor where underwater photographers must make precise technical judgments quickly and accurately, their minds are increasingly dulled by the simple act of breathing the very air needed to survive. At greater depths, even vision is adversely affected.

Underwater photographers also must work in a weightless, neutrally buoyant state. They are not aided by gravity to steady themselves for a shot. Tripods are not practical: The subjects are generally moving, and the divers themselves are pushed around by currents and surges in an environment constantly in motion.

These problems and many more face marine-life photographers in the best of circumstances. But for a special breed of underwater photographer who chooses to work in the most difficult of all ocean environments where light levels are low, the water is generally murky and the temperatures are bone-numbing cold, the problems are compounded many times over.

That certainly is the case in the frigid waters off the Pacific Northwest, which generally extend from central California to southeastern Alaska and are characterized by a large diversity of marine habitats and ecosystems, including kelp forests, eelgrass beds, rocky and cobble shores, and estuaries. To work in these habitats, a diver must add the extreme bulk and encumbrance of a dry suit and thick gloves that provide insulation but ­also inhibit sensitivity to touch. Even manipulating the camera controls with such burdens is an exceptional achievement, which makes the resulting images of underwater specialist David Hall all the more remarkable.

During the past two decades, the New York-based photographer has made more than a dozen trips to the Pacific Northwest to document the region’s marine life with his camera (including this color-changing red Irish Lord surrounded by Plumose anemones, above). What drives him to repeatedly expose himself to such adverse conditions?

“The answer lies in the amazing variety of invertebrate life—much of it endemic—found in those waters,” Hall says. “The diversity of sea stars, lithode crabs, nudibranchs, chitons, anemones and jellyfish is astounding. Add to this a surprising number of unique fish, an impressive array of marine plants and some very photogenic marine mammals, and you will better understand my enthusiasm.”

Hall made all of the photographs displayed on the following pages in Canadian waters. “But these animals and plants do not recognize international borders,” he says. “Virtually all of them also can be found in the coastal waters to the south and north of British Columbia. They are biological treasures that greatly deserve our recognition and protection.” 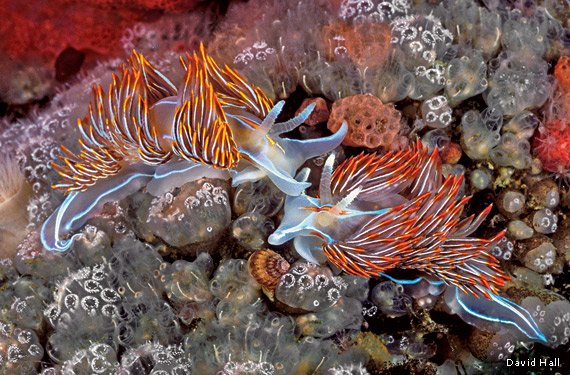 A pair of opalescent nudibranchs meet on a field of transparent compound ascidians, or sea squirts as they are commonly known. The nudibranchs’ brilliant red cerata advertise the presence of stinging capsules (nematocysts) that the nudibranchs acquire after eating certain prey, such as hydroids and sea anemones. “The nematocysts are, in effect, recycled by the nudibranchs and serve to defend these colorful sea slugs from other marine predators,” says Hall. 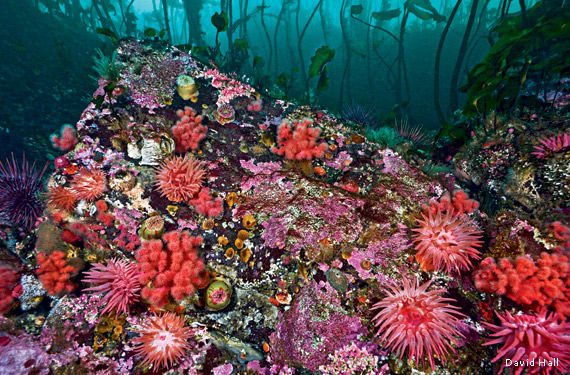 Red soft corals and crimson sea anemones carpet the floor of a kelp forest off British Columbia. Around them, crustose coralline algae and encrusting hydrocorals form a pink and purple flat covering on rocky surfaces in these chilly waters. Hall has found that underwater visibility in the region usually is best during the winter months. 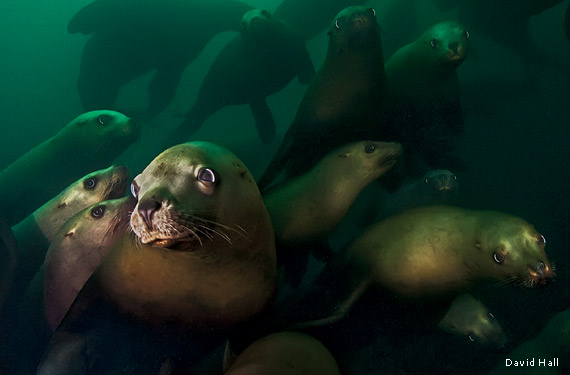 Thirty or more huge Steller sea lions surround the photographer during a February dive. “They were very aggressive in their attempts to ‘examine’ me, and the situation soon became potentially dangerous,” says Hall, who was diving alone at the time. “I snapped a few photos and left the water, rather than risk a serious accident.”

Hall found this stubby squid (right) at night on the sandy bottom off Nigei Island, British Columbia. During the day, he says, it would have been buried in sand. Some biologists consider bobtail squids like this species to be an intermediate life-form between squids and cuttlefish.

These Nakwakto gooseneck barnacles (left) are found only at the narrow entrance to a system of fiords in Slingsby Channel, British Columbia, where the tidal current may exceed 15 knots. “Slack tide at this location can be as brief as 15 minutes,” says Hall. “Stay in the water much longer, and you risk being swept away.”

Already some 300 miles upriver from the sea, this male (below) was one of millions of sockeye in British Columbia’s Adams River in October 2010, resulting in the largest salmon run in the river in a century. If he succeeded in reaching his final destination and mating in the stream in which he hatched, this fish would have died shortly thereafter, his decomposing body providing nutrition for many of the plants and animals in this Pacific Northwest forest ecosystem. 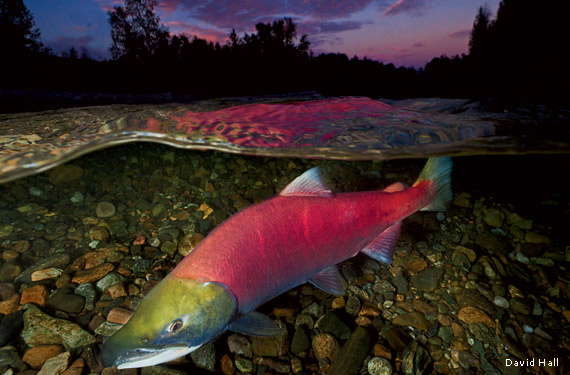 These photographs were featured in and the above text excerpted from the book Beneath Cold Seas: The Underwater Wilderness of the Pacific Northwest, © 2011 by David Hall, with foreword © Christopher Newbert, published in the United States by the University of Washington Press and in Canada by Greystone Books, in partnership with the David Suzuki Foundation. 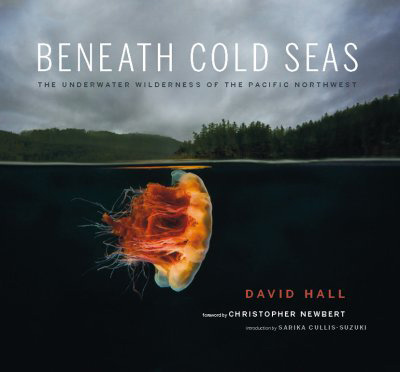 Christopher Newbert is an acclaimed, award-winning underwater photographer and author of the classic book Within a Rainbowed Sea.

To learn more about photographer David Hall and his book Beneath Cold Seas: The Underwater Wilderness of the Pacific Northwest, visit www.beneathcoldseas.com.

See the amazing photos and
enter your own in the 2013
National Wildlife Photo Contest!