After a century-long absence, sockeye salmon are back in Washington’s Yakima River Basin 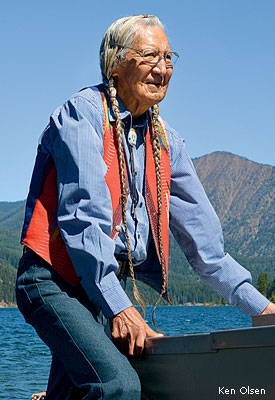 LAST JULY, WITH PRAYERS AND SONGS to bless the sockeye, Russell Jim opened a tank and released a shimmering burst of salmon into the blue-green waters of Cle Elum Lake, high in Washington’s Cascade Range. After a century-long absence, the kálux—as they are known by the Yakama Indians—were back. The Yakama Nation successfully reintroduced these revered fish to this glacial lake, which served as a natural nursery for millennia until dams and water diversions wiped out the Yakima River Basin’s salmon and steelhead. For the Yakama, this was a significant and sacred moment.

“When we bring back the fish, we also bring back the health of our people,” says Jim, a tribal elder. “Our DNA is tied to this river, and we need the resources it provides.”

The sockeye brought home now have a future thanks to a coalition that helped craft a management plan to improve water supplies throughout the basin for both wildlife and farmers while anticipating future water needs in light of a changing climate. Beginning in 2009, NWF, American Rivers, The Wilderness Society and the Yakama Nation worked with farmers, fishermen, biologists and government agencies on an integrated effort to improve stream flows with better irrigation practices, restore wildlife habitat and construct fish passages around six dams in the upper portion of the basin, 90 miles southeast of Seattle.

As part of the restoration effort, that same year the Yakama tribe started transporting sockeye from two river basins—the Wenatchee and the Okanogan—and releasing them in Cle Elum Lake. Their progeny, which swam down the Yakima River and out into the ocean, were the first to return to Cle Elum Lake.

The restoration package also includes the state’s purchase of more than 50,000 acres of forest in the nearby Teanaway River watershed (see map below)—some of the highest-quality fish spawning and rearing areas in the Yakima Basin—from a private timber company. Just days before the Yakama celebrated the return of the sockeye, a near-unanimous Washington State Legislature allocated $132 million for the land purchase as well as other improvements, including the design of a downstream fish passage at Cle Elum Dam.

“We’ve achieved a major milestone [with this land purchase] in less than five years, which is incredibly fast,” says Steve Malloch, NWF’s former western water program manager who played a pivotal role in the victory. 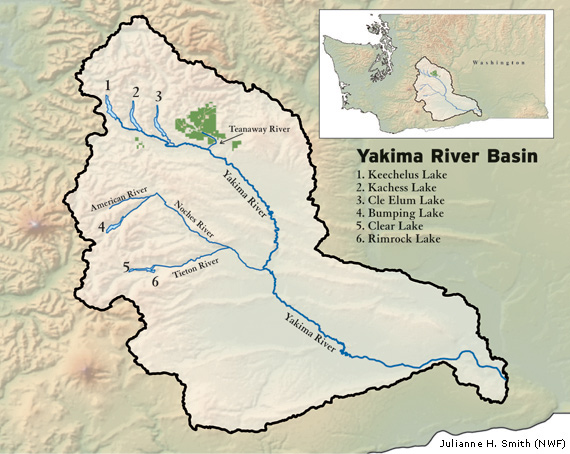 Helping a Parched Basin
Fast action to make sure the basin has enough water for wildlife and farmers is critical considering the Pacific Northwest’s largest natural water reservoir–its snowpack–is shrinking. Warmer regional temperatures are leading to less snow as well as melting the snowpack earlier, resulting in lower summer flows. “We do not have the option of ignoring it, or none of us will make it,” says Urban Eberhart, who represented farmers in the coalition effort.

Juvenile sockeye spend their first year of life in lakes such as Cle Elum. More than 200,000 were once here and in three other glacial lakes in the Yakima Basin. Then juvenile sockeye rode the spring snowmelt down the tributaries to the Columbia River and into the Pacific Ocean. There they grew to adults before returning to spawn in the waters where they hatched. The adult salmon brought nitrogen, phosphorous and other marine nutrients that nurtured the region’s lakes and forests. Bears, wolves and other wildlife consumed the fish and spread the natural fertilizer.

Salmon also were key to the Yakama’s thriving barter economy. The tribe traded sockeye with others as far away as the Great Plains. But in the late 1800s, farmers began damming Yakima Basin lakes and diverting water from salmon-bearing streams to their orchards and fields. The U.S. Bureau of Reclamation began building dams and reservoirs for agriculture in the early 1900s. Wild sockeye quickly vanished.

“These salmon went extinct in one generation—four years—after they built Cle Elum Dam, as adults and juveniles could not pass over it,” says Dave Fast, senior research scientist for the Yakama Nation’s fisheries programs.

A series of droughts beginning in the late 1970s brought another significant problem to light: The Yakima Basin’s water supply was severely overcommitted. Approximately 2.4-million-acre feet of water rights had been allocated in a basin that only had 1-million-acre feet of storage reservoirs.

The coalition knew it needed to work out a compromise package that helped both fish and farmers. “Steve [Malloch] came up with the idea of incorporating a major land protection piece for the benefit of everybody,” Eberhart says. “I think that was the key to the whole thing clicking.”

The Teanaway River Valley is a rich mix of grasslands and forest that provides habitat for a wide range of animals, including mountain lions, elk, mule deer, salmon and steelhead, and has been treasured by residents for its fishing, hiking and other outdoor opportunities. The state’s purchase of the Teanaway land combined water and habitat conservation with fish restoration while expanding its public land available for recreation.

The next steps in the Yakima Basin management plan, which emphasizes efficient water use and improved water conservation, include building fish passages at six dams and drawing water from four of the basin’s lakes to help salmon and farmers. It also will secure additional water from Kachess Lake for use during droughts and calls for a new dam and reservoir to provide water for agriculture and increase stream flows during dry years.

“That’s an enormous testament to trying to solve problems rather than stake out positions,” says Malloch, who hopes this plan will serve as a model for cooperative, climate-smart conservation throughout the West. “Salmon reintroduction could have been futile without this agreement ensuring adequate stream flow and habitat for future generations.” 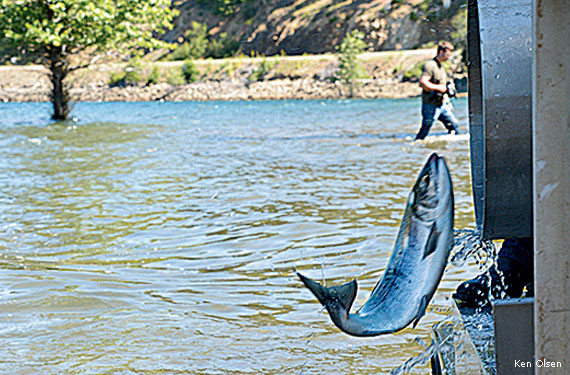 The tribe selected Cle Elum Lake for the first sockeye reintroduction effort because it provides access to the most pristine salmon habitat in the basin, says Brian Saluskin, a fish passage biologist and tribal member. The early returns are hopeful: More than 500 offspring from the 1,000 sockeye transplanted here in 2009 came back last summer. Like the hundreds of other people who gathered at Cle Elum Lake for the celebration, Saluskin sees a whole new future because the sockeye are back. “We know we can reestablish fish,” Saluskin says. “We know we can right a wrong. Sockeye are just the beginning.”

The Federation is working with communities, agencies and state governments across the United States to craft climate-smart conservation plans that not only address current environmental stresses but also anticipate future needs. For example, NWF helped the Washington Department of Fish and Wildlife integrate climate change into its State Wildlife Action Plan. Visit www.nwf.org/climate-smart to find out more about NWF climate vulnerability assessments, adaptation guides and projects in your region.