Collin O’Mara aims to inspire all generations to conserve nature 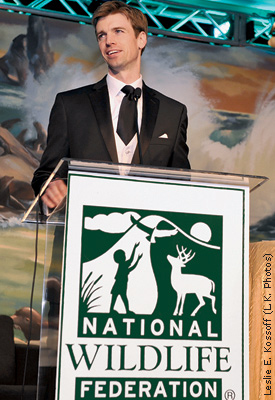 IN JULY, former Delaware Secretary of Natural Resources Collin O'Mara took over the reins of NWF, becoming its president and chief executive officer. he succeeds Larry Schweiger, who retired in May after serving the Federation for more than 10 years.

Spalding, chair of NWF’s Board of Directors, says the board chose O’Mara because he is “a tireless leader with a deep understanding of conservation issues and a strong entrepreneurial spirit.” Schweiger adds, “I am pleased that Collin shares NWF’s commitment to addressing climate change, protecting wildlife and connecting kids with nature.”

A native of Syracuse, New York, O’Mara inherited a passion for nature from his parents, longtime NWF members who exposed him to the outdoors at every opportunity. He began his career in environmental leadership at age 23 with an efficiency initiative at Syracuse City Hall that saved the city some $14 million in 2003. He then spent nearly three years as the City of San Jose’s clean technology strategist. By 2009, when he took on his role as secretary of Natural Resources and Environmental Control, he had become the youngest state cabinet official in the nation and served as Delaware’s top environmental official.

As secretary, O’Mara spearheaded initiatives to conserve and restore wildlife habitat, improve air quality, ensure access to clean water, expand outdoor recreation and environmental education opportunities, and enhance the state’s resilience to extreme weather and other climate impacts. Among these initiatives was a $200 million project that improved the state’s environmental infrastructure, including restoring beaches and improving wastewater and storm-water systems. He also led Delaware’s First State Trails and Pathways Initiative, which expands and connects the state’s trail system, and its No Child Left Inside/Children In Nature campaign, which combats childhood obesity while giving youth opportunities to experience the wonders of the natural world.

“I look forward to building upon Larry’s inspiring work,” O’Mara says. “We will do our part to leave a healthier and more sustainable planet for all wildlife and future generations.”