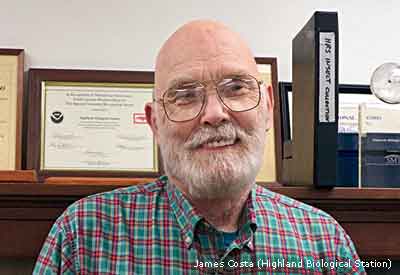 ENTOMOLOGIST DAVID ALSOP has been an active NWF supporter and donor since 1991, an outgrowth of his lifelong interest in wildlife. While growing up in rural New Jersey, he collected insects, which led him to major in evolutionary biology at Cornell University. He subsequently taught for 30 years at Queens College of the City University of New York while conducting research in such distant locales as Trinidad.

When he retired in 2006, he moved from New York to the mountains of far western North Carolina. On his 5-acre property, certified by NWF as a wildlife habitat under the Garden for Wildlife™ program, he has tabulated more than 760 species of butterfly and moth. This past summer, he also taught classes at the nearby Highlands Biological Station. “I’m never bored,” he says.

He selected NWF for his support after checking into conservation groups while still a college professor. “You were picked out for your education work,” he says, high praise from the man named professor of the year at Queens College in 2004.