This creative, 11-year-old California girl turned her birthday party into a commitment to protect wildlife 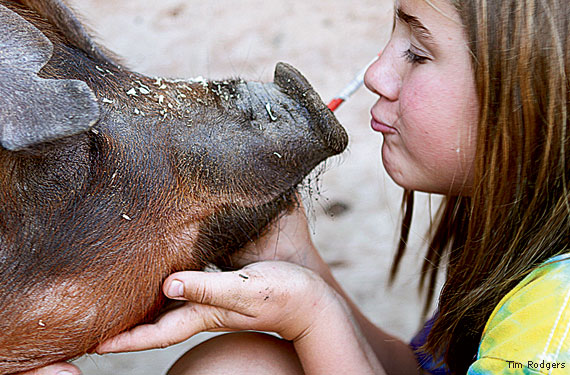 FRIENDS OF SIXTH-GRADER ALIA RODGERS of Napa, California, call her Snowflake because, like a snowflake, she is unique. Though only 11 years old, she is a seasoned fisher of Montana trout streams and recently won the best-of-breed contest at the Napa County Fair with a red Duroc hog she raised herself. She used her last birthday party to raise funds for NWF’s conservation work by asking participants to make donations rather than bring gifts. “I was thinking of all the animals that are endangered,” she says, describing how she came up with the plan.

She also was thinking about another important influence in her life, California attorney Ron Clausen, who became an NWF board member last April only two days after he stepped down from a term as a director of the Montana Wildlife Federation, an NWF affiliate. His dedication was a source of inspiration to Alia, who says that she determined to make her birthday into a fundraiser because of “how much Ron put into the Montana Wildlife Federation and how much he wanted us to see what it means to him.”

The head of the Clausen Law Group in Point Richmond, California, Clausen may seem an odd conduit for linking a California girl to Montana and NWF, but he has tight bonds to the Big Sky State. Eleven years ago he took one of his sons there to fish and check out universities. He liked the state so much he bought a house near the town of Clinton and soon launched the Montana Extravaganza, in which 20 participants stay at his home for a week, fishing and hiking by day and listening to talks about Montana wildlife and conservation issues at dinner. Clausen hosts these events for three consecutive weeks each summer, a major effort to draw attention to the state’s conservation challenges and wildlife heritage. Last year’s Extravaganza raised $10,000 to buy grazing allotments that ranchers held along the Beaver River, reducing conflicts between bison and livestock.

Alia’s father, Tim, began attending the event 10 years ago and has brought Alia and her sister Mardi with him for the past five years. Clausen credits Alia’s interest in NWF in part to a Montana Extravaganza talk about bison given by Tom France, NWF senior director for western wildlife conservation.

Five years ago Clausen launched another annual event, Montana Matters, an evening of barbecue and music that features a barn dance as well as speakers such as France, animal educator Jack Hanna and Montana’s director of Fish, Wildlife & Parks, Jeff Hagener. The event, says Clausen, is meant “to open people up to the glories of Montana.”

The Montana Matters Napa Concert, featuring Montana entertainers, has been held annually on property belonging to Alia’s parents, who own Walsh Vineyards Management, the largest wine-growing operation in California’s Napa County. They have converted a maintenance shop into a showcase with a stage for the concert. Alia has been a fixture at the event since it began, Clausen says, and she adopted its fundraising model for her birthday party. “This was a little girl who saw the opportunity on her own and ran with it,” he says.

Montana Matters concerts attract hundreds of participants and have raised tens of thousands of dollars to support the work of NWF and the Montana Wildlife Federation. This year’s Montana Matters was held in early November. Already Clausen is looking ahead to next summer’s Extravaganza and the 2014 Montana Matters concert series that, as an NWF board member, he hopes to roll out nationally.

Meanwhile, Alia is keeping her eye on the future, too, where she sees herself as a veterinarian, “because I want to work with animals.”