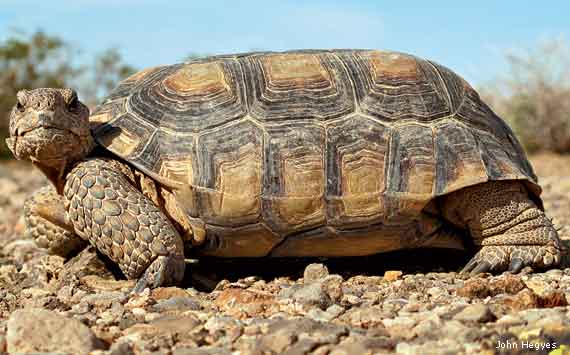 In recent years, to keep tabs on the animals, biologists have systematically walked transects across the 17-square-mile base, noting how many tortoises they observed and temporarily capturing ground squirrels to count them. But officials at Edwards wanted a more accurate and less-expensive way to monitor the imperiled residents. So three years ago the facility’s environmental management team put out a call for help and received a response from an unexpected quarter: the security industry.

Walter Scheirer, director of research and development at Colorado-based Securics, Inc., said he could solve Edwards’s dilemma with a machine-vision system that automatically recognizes and counts individual animals using a program accessed via a smartphone or tablet computer. The system uses a computer model based on algorithms, or series of steps that solve mathematical problems, to learn the unique features of each species by analyzing thousands of different images. Then, like a human facial-recognition program, the system scans datasets for familiar clumps of pixels, pulling out the animals of interest automatically.

The Air Force took him up on the offer. Last year, a team of computer scientists and biologists ran a series of field tests on tortoises and ground squirrels at Edwards. They collected massive amounts of data to “train” the algorithms Scheirer had set up, and they tested different housings to keep the equipment safe.

Phil Leitner, a biologist at Saint Mary’s College in California and a Mohave ground squirrel expert who is helping gather data at Edwards, says the project has opened up an entirely new way to do biological research. While camera traps have existed for years, the new system makes them far more useful by sorting through the images they capture to find pictures of a certain species. “It’s the missing piece in our ability to use trail cameras effectively,” he says.

In 2012, Leitner and a colleague accumulated 12 million photos of different animals in various locations using camera traps. “It’s easy to get the photos, but that’s only the beginning,” he says. “You have to go through this haystack and find the species that you're interested in.” Scheirer adds that the scientists plan to start using the data this year to build tortoise and squirrel population models in unprecedented detail. The new models will help the Air Force operate the base with as little disruption as possible to the animals.

Leitner is excited to use the algorithms in his desert wildlife studies. “You can have 20 or 50 cameras out in the desert and get photos of secretive animals that wouldn’t normally allow you to get close,” he says.

Meanwhile, at Princeton University, researcher Dan Rubenstein is working on a similar machine-vision system called HotSpotter that recognizes individual animals through their unique pattern of spots or stripes. Such systems, he believes, will allow biologists to focus on individual animals on a large scale, something they haven’t been able to do. “We could start to build massive databases of who’s who and how they move in time,” he says, “and figure out how they relate to each other.” Ultimately, he adds, “We’re going to be able to help save ecosystems.”
Writer Hal Hodson is based in Boston.