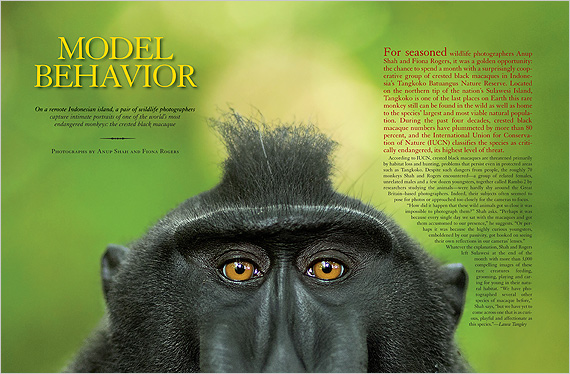 FOR SEASONED WILDLIFE PHOTOGRAPHERS Anup Shah and Fiona Rogers, it was a golden opportunity: the chance to spend a month with a surprisingly cooperative group of crested black macaques in Indonesia’s Tangkoko Batuangus Nature Reserve. Located on the northern tip of the nation’s Sulawesi Island, Tangkoko is one of the last places on Earth this rare monkey still can be found in the wild as well as home to the species’ largest and most viable natural population. During the past four decades, crested black macaque numbers have plummeted by more than 80 percent, and the International Union for Conservation of Nature (IUCN) classifies the species as critically endangered, its highest level of threat.

According to IUCN, crested black macaques are threatened primarily by habitat loss and hunting, problems that persist even in protected areas such as Tangkoko. Despite such dangers from people, the roughly 70 monkeys Shah and Rogers encountered—a group of related females, unrelated males and a few dozen youngsters, together called Rambo 2 by researchers studying the animals—were hardly shy around the Great Britain–based photographers. Indeed, their subjects often seemed to pose for photos or approached too closely for the cameras to focus.

“How did it happen that these wild animals got so close it was impossible to photograph them?” Shah asks. “Perhaps it was because every single day we sat with the macaques and got them accustomed to our presence,” he suggests. “Or perhaps it was because the highly curious youngsters, emboldened by our passivity, got hooked on seeing their own reflections in our cameras’ lenses.”
Whatever the explanation, Shah and Rogers left Sulawesi at the end of the month with more than 3,000 compelling images of these rare creatures feeding, grooming, playing and caring for young in their natural habitat. “We have photographed several other species of macaque before,” Shah says, “but we have yet to come across one that is as curious, playful and affectionate as this species.” 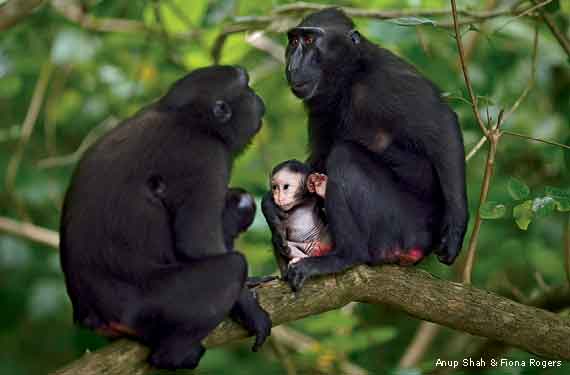 In macaque social groups, females, such as these mothers with their offspring, outnumber males by about four to one. While males leave their natal groups when they reach maturity, females usually remain together for life. “We found that the females were friendly and supportive of each other,” Shah says. “Not only does a close bond develop between a mom and her baby but also between moms with babies of similar age.” 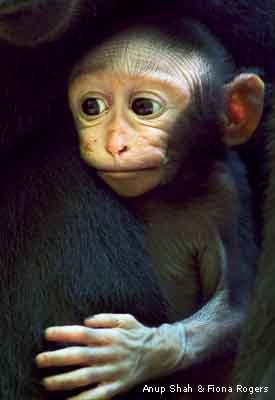 Females, which reach sexual maturity between the ages of 3 and 5, give birth to a single offspring following a six-month pregnancy. Macaque youngsters stay with their mothers and continue to nurse for about a year. 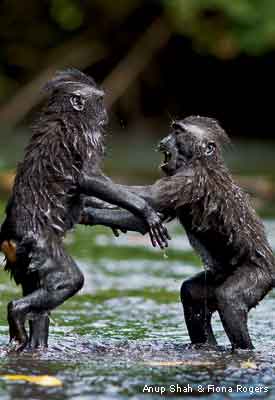 Two juvenile macaques, most likely males between the ages of 1 and 2, play in a river that runs through the reserve’s forest. The youngsters’ play “is part fun, part a rehearsal for adult power games and part stimulus for the brain to grow,” Shah says.

To find food and deter predators, these monkeys must cooperate. “But they also compete with one another for survival,” he says. “Macaques need intelligence, and play helps to hone that intelligence.” 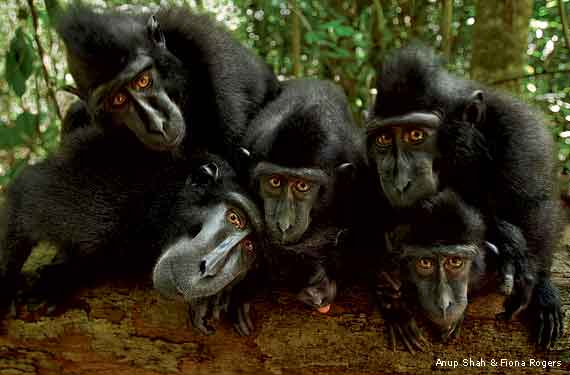 Taking a break from playing on a fallen tree trunk, a group of six young macaques rushed toward the photographers to peer at their reflections in the cameras’ lenses, “pushing and shoving until a heap was formed,” Shah recalls. “We could not have asked for a better pose.”