The fight to bring back North America’s dwindling migratory monarchs 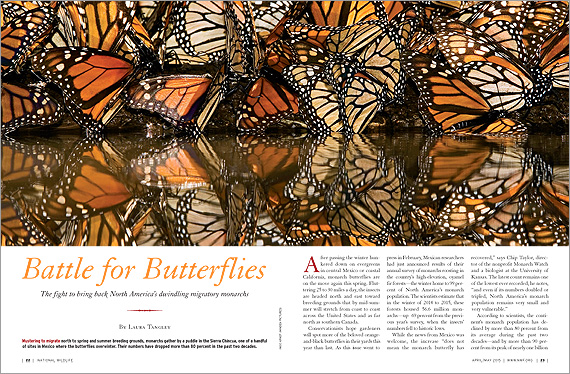 AFTER PASSING THE WINTER hunkered down on evergreens in central Mexico or coastal California, monarch butterflies are on the move again this spring. Fluttering 25 to 30 miles a day, the insects are headed north and east toward breeding grounds that by mid-summer will stretch from coast to coast across the United States and as far north as southern Canada.

Conservationists hope gardeners will spot more of the beloved orange-and-black butterflies in their yards this year than last. As this issue went to press in February, Mexican researchers had just announced results of their annual survey of monarchs roosting in the country’s high-elevation, oyamel fir forests—the winter home to 99 percent of North America’s monarch population. The scientists estimate that in the winter of 2014 to 2015, these forests housed 56.6 million monarchs—up 69 percent from the previous year’s survey, when the insects’ numbers fell to historic lows. In California, where the remainder of the continent’s monarchs overwinter, volunteers counted 234,732 butterflies at 185 sites, about the same number as last year.

While the news from Mexico was welcome, the increase “does not mean the monarch butterfly has recovered,” says Chip Taylor, director of the nonprofit Monarch Watch and a biologist at the University of Kansas. The latest count remains one of the lowest ever recorded, he notes, “and even if its numbers doubled or tripled, North America’s monarch population remains very small and very vulnerable.”

According to scientists, the continent’s monarch population has declined by more than 80 percent from its average during the past two decades—and by more than 90 percent from its peak of nearly one billion butterflies in the mid-1990s. With modest numbers of non-migratory monarchs ranging south to Peru, and small, introduced populations established in locations around the world, the species Danaus plexippus most likely will survive. But “we very well may lose the spectacular phenomena of monarch migration and overwintering,” says Lincoln Brower, a Sweet Briar College biologist who has studied the butterflies since the 1950s. 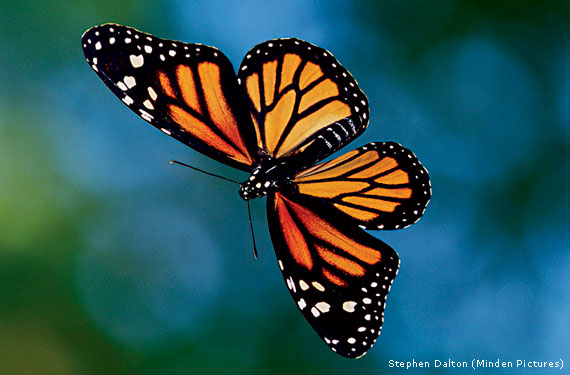 Migratory Marvels
North America’s monarch migration—up to 3,000 miles round-trip—and large winter aggregations make up one of the greatest natural history spectacles on Earth. While many bird species undertake longer seasonal movements, monarchs are different because their migration takes place over several generations. Butterflies flying to Mexico in fall are the great-grandchildren of insects that departed the previous spring. These individuals have never seen their winter habitat—and how they find their way remains largely a mystery.

Scientists have known for several years that monarchs use a sun compass, with receptors located in their antennae, to orient southward in fall. Last summer, researchers from the University of Massachusetts Medical School reported in Nature Communications that the insects also possess a magnetic compass, explaining how they can still travel south on overcast days. “But none of this tells us how monarchs that have never been to Mexico navigate to the same grove of trees—sometimes the same trees—their ancestors did generations before,” Brower says. If and when that mystery is solved, he adds, “It will be a great scientific discovery.”

Whether bound for Mexico (most butterflies east of the Rocky Mountains) or California (most to the west), monarchs must winter in habitats that are warm enough to prevent freezing but not so warm they begin to reproduce and burn up fat reserves needed to migrate in spring.

Brower discovered just how picky the butterflies are in the early 2000s when he and his colleagues conducted a series of aerial searches for Mexican monarch colonies that had not yet been identified. Though the researchers surveyed more than 155 square miles of forest that appeared to be suitable habitat (based on elevation and tree cover), they found no sign of the butterflies outside a small number of sites scientists discovered in the 1970s. “The extraordinary site fidelity and extreme localization of colonies within such a small portion of available habitat underscore the utter urgency of protecting the forests,” they wrote in American Entomologist.

Conservationists concerned about monarchs focused initially on protecting these Mexican forests, where large-scale, illegal logging was destroying or degrading vast expanses of habitat. Thanks to such efforts, “the Mexican authorities began effectively enforcing regulations to protect monarch reserves about seven years ago,” says Scott Hoffman Black, executive director of the Xerces Society for Invertebrate Conservation and co-chair of the Monarch Joint Venture, a partnership of more than 20 U.S. federal and state agencies, universities and nongovernmental organizations, including the National Wildlife Federation. “Enforcement, along with economic support for local people, has mostly curtailed large-scale logging.” Small-scale tree removal—which can alter the microclimate monarchs need—remains a problem, he adds. 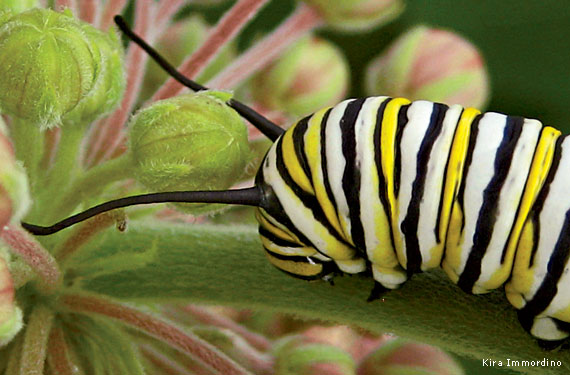 Now a more formidable threat has emerged on the U.S. side of the border: the destruction of habitat across the butterflies’ breeding range, particularly milkweed loss in the Midwest. Host plants for monarchs, milkweeds are the only plants the butterflies’ caterpillars can eat (a caterpillar feeds on common milkweed, above). Moreover, “the majority of the world’s monarchs are produced by milkweeds in the Corn Belt,” says University of Minnesota biologist Karen Oberhauser, co-chair of the Monarch Joint Venture. She and Iowa State University biologist John Pleasants estimated that more than 60 percent of the region’s milkweeds were lost between 1999 and 2012. During the same period, Oberhauser says, the Midwest produced  88 percent fewer monarch butterflies than it did before 1999.

Milkweeds—along with the nectar plants monarchs need to fuel migration—have fallen prey to changes in midwestern farming practices. The most detrimental has been development and increased planting of corn and soybeans genetically engineered to survive applications of the herbicide glyphosate, or Roundup. The near ubiquitous use of “Roundup Ready” crops today allows farmers to apply the herbicide widely, killing off milkweed and other native plants that once thrived between crop rows and along the edges of millions of acres of agricultural land.

Milkweed losses also have been driven by the massive conversion of grasslands, rangelands and former conservation reserves to monocultures of corn and soybeans—a change propelled in large part by federal pressure to develop ethanol as an alternative fuel. Taylor reports that since 2007, farmers have plowed under more than 24 million acres of new cropland, an area about the size of Indiana. “In much of the Corn Belt, farming is now from road to road, with little habitat for any form of wildlife remaining,” he says.

As monarch populations plummet, “other threats are becoming proportionally more significant,” Oberhauser says. She cites disease, predation in the butterflies’ winter roosts, insecticide use and invasion by nonnative plants related to milkweeds. Monarchs lay eggs on these plants, called swallow-worts, but their caterpillars cannot eat the leaves and die.

Monarchs also have been hit hard in recent years by extreme weather events such as droughts, storms, heat waves and unusually cold or wet springs that delay reproduction—events likely to become more frequent with climate change. Some studies suggest that by the end of this century, global warming may eliminate forests within the insects’ Mexican reserves. Even without such losses, overwintering butterflies are constantly at risk from bad weather. A single storm in 2002 killed an estimated 500 million monarchs—eight times more butterflies than survive in North America today. 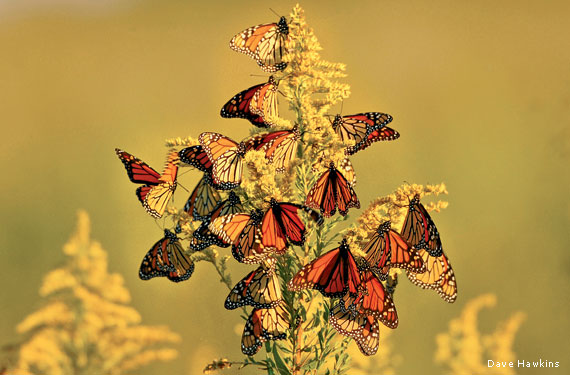 Butterfly Heroes
Known to most Americans since grade-school biology, monarchs are iconic insects whose popularity may help save them. Indeed, an unprecedented effort to bring back the butterflies began in February 2014, when President Barack Obama met with Mexico’s President Enrique Peña Nieto and Canada’s Prime Minister Stephen Harper in Toluca, Mexico. One result of their “Three Amigos” summit was creation of a three-nation working group on monarch butterflies. Two months later, the White House convened a meeting of scientists and conservationists to discuss declining pollinators, focusing on bees and monarchs. “I never expected that a President of the United States would draw attention to this problem,” says Sarina Jepsen, endangered species program director for the Xerces Society, one of 60 groups represented at the meeting.

Last June, the White House went one step further, issuing a memorandum that calls for creation of a federal strategy to protect pollinators. Specifically, the president directed the heads of more than a dozen government agencies to take action on behalf of bees, monarchs and other pollinators—moves with considerable conservation potential given that the government owns hundreds of millions of acres ranging from national parks, forests and wildlife refuges to rights-of-way along federal highways, pipelines and power lines. 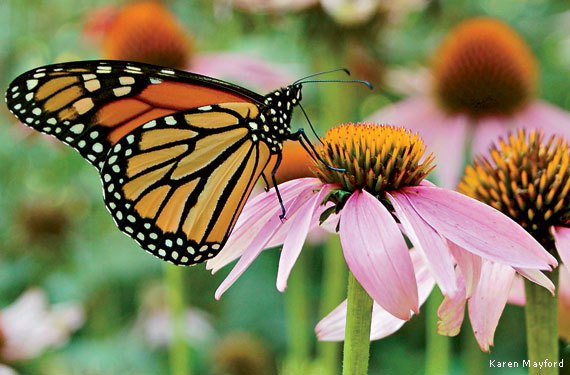 Monarch Task Force
One task force, led by U.S. Fish and Wildlife Service Director Dan Ashe,  focuses on monarchs, and the service is reviewing a petition to list the butterfly as threatened under the U.S. Endangered Species Act. Meanwhile, dozens of nongovernmental groups—including NWF—are mobilizing members and partners nationwide to restore milkweed and native nectar-plant habitat for monarchs.

Will such efforts be enough? “The scale of habitat loss is so great that we’ve only just begun,” Jepsen admits. According to Taylor, one million acres of milkweed must be planted annually simply to keep pace with new losses. Creating all the habitat monarchs need, he adds, “requires the largest habitat-restoration program ever attempted in the world.” Still, he and other scientists believe it is doable—with sufficient will, collaboration and long-term financial commitment. “There is no reason to lose the monarch migration,” Taylor says. 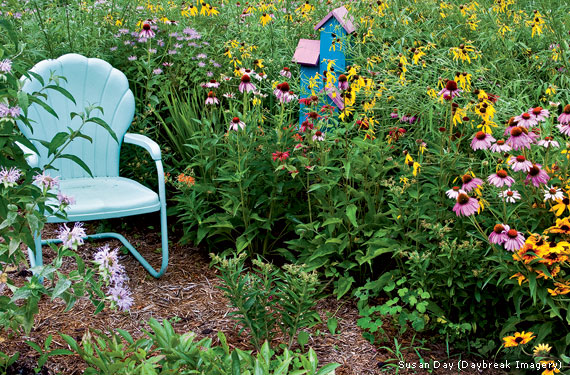 Plant milkweeds native to your region. Because they coevolved with your region’s wildlife, native milkweeds are best. Recent research shows that one popular nonnative—tropical milkweed—may even harm monarchs in the Southeast. That’s because, unlike indigenous species, tropical milkweed foliage does not die back in areas that stay warm during winter, encouraging nonmigratory monarchs to breed year-round and causing the buildup of a debilitating parasite, called OE, that caterpillars ingest when eating the leaves. Sources of native milkweeds include Monarch Watch’s Milkweed Market and the Xerces Society’s Milkweed Seed Finder.

Cultivate native nectar plants. Nectar sources are especially important during spring and fall when monarchs migrate and need to fuel their flights, which can reach 2,000 miles during fall. Sources for native nectar plants include the Lady Bird Johnson Wildflower Center’s Native Plant Database and regional planting guides published by the Pollinator Partnership.

Avoid pesticides. In particular, steer clear of systemic insecticides such as neonicotinoids. These are taken up by plants’ vascular systems, leaving caterpillars and butterflies that feed on leaves, nectar and pollen exposed to the poison long after it has been applied. A new study provides evidence that milkweed leaves treated with one neonicotinoid, Imidacloprid, kill monarch caterpillars that eat them. 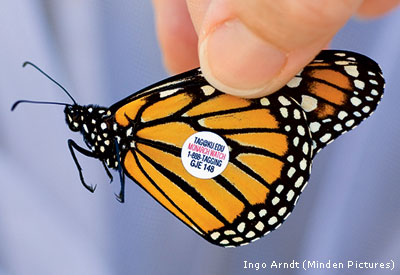 NWF Priority: Push for Pollinators
As part of a larger effort to protect pollinators, NWF and the U.S. Fish and Wildlife Service signed an agreement in February calling on citizens to help monarchs by cultivating milkweed and native nectar plants. Unlike with many environmental crises, “we don’t have to wait for someone else to take action,” says NWF President Collin O’Mara. Adds Mary Phillips of the Federation’s Garden for Wildlife™ program: “With some 400,000 participants, we offer tremendous potential to create new monarch habitat nationwide.” To find out more—and to learn how NWF affiliates are helping pollinators—visit www.nwf.org/pollinators.