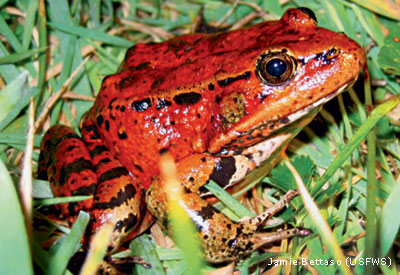 IN JANUARY, CALIFORNIA'S STRIKING RED-LEGGED FROG (left) began its reign as the official state amphibian, nearly 150 years after Mark Twain immortalized its leaping prowess in his story “The Celebrated Jumping Frog of Calaveras County.” But if Twain were alive today, he might wonder why so few of his famous frogs are thriving.

Federally listed as threatened, this legendary leaper—the West’s largest native frog—has disappeared from 70 percent of its historic range in California and Mexico. Gold Rush miners ate the meaty frogs by the thousands. Today, imported nonnative bullfrogs devour red-legged frogs and can infect them with a deadly chytrid fungus. Farmers and developers have drained more than 90 percent of California’s wetlands, and now the state is in its fourth year of historically unprecedented drought. Laura Patterson, California’s coordinator of amphibian and reptile conservation, reports that “many of the smaller ponds, wetlands and streams are drying up earlier than usual,” before tadpoles can metamorphose into juveniles capable of surviving on land.

To help amphibians, NWF California Director Beth Pratt partnered with the nonprofit Save The Frogs to encourage residents to create wetlands and native-plant gardens. The organization’s founder, Kerry Kriger, is hopeful. “There’s no reason that the California red-legged frog should go extinct,” he says, “because we have the ability to protect and increase its populations.”

Kriger is working to “Re-Frog America” by creating 1,000 wetlands in the next decade. Last year, he and wetlands ecologist Tom Biebighauser helped build more than a dozen wetlands in California alone, including one at SLVUSD Charter School in Ben Lomond (below). Rhonda Schlosser, administrator and teacher at the school, says her students had fun and also learned “how to be stewards of their local land.”

Pratt says pond size doesn’t matter as much as “creating as many safe havens as possible” and connecting them. The Amphibian and Reptile Conservancy, U.S. Forest Service and others did so by building, restoring or redesigning seven wetlands in California’s Eldorado National Forest to entice red-legged frogs from a nearby pond into the forest to breed. Such efforts are “the only way we are going to reverse this trend in wetland loss,” Biebighauser says. 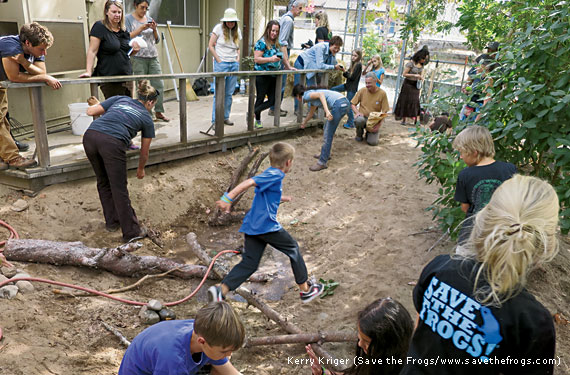 NWF partnered with Save The Frogs (www.savethefrogs.com) to encourage creating habitat for the California red-legged frog and other amphibians. Get tips for building your own pond or wetland at www.nwf.org/frogpond and learn to Garden for Wildlife™ at www.nwf.org/nwfgarden.

Managing Editor Anne Bolen has blogged about the efforts of NWF and its affiliates to help California red-legged frogs.