Wildlife still suffering in the Gulf of Mexico 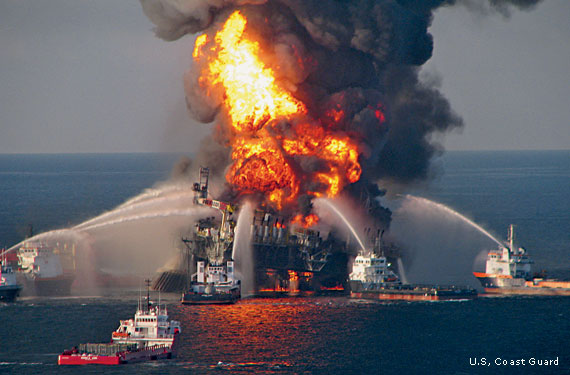 ON APRIL 20, 2010, the BP Deepwater Horizon drilling rig exploded in the Gulf of Mexico, killing 11 people and triggering the worst oil spill in U.S. history. At about 4,500 feet deep, at least 140 million gallons of oil and a significant volume of gas spewed from the broken pipe. That oil and gas, plus some 2.3 million gallons of chemical dispersants, caused environmental impacts that we are still trying to grasp.

The National Wildlife Federation has issued annual reports on the spill’s aftermath, with the latest due this April (see www.nwf.org/FiveYearsLater). “These reports make clear that the spill’s consequences for wildlife and habitats have been widespread and ongoing,” says report co-author and NWF Senior Scientist Doug Inkley.

The disaster occurred in waters off the Mississippi River Delta, an area where countless fish, bird and other wildlife species feed and reproduce. Many were breeding at the time, exposing vulnerable larvae and young to toxins from oil and other chemicals. One study found that bluefin tuna larvae exposed to oil had reduced heart function and significant physical deformities, and similar effects have been found in a number of fish species, from minnows to mahi mahi. The study specifically noted that all other vertebrates, particularly marine mammals, may be susceptible to these impacts as well.

By some estimates, 800,000 birds died in coastal and offshore waters as a result of the spill, which left an oil-contaminated area roughly the size of Rhode Island on the bottom of the Gulf. A federal report also notes that oyster reproduction is down across the oil-affected area. But two species in particular illustrate the scope of the problem: Kemp’s ridley sea turtles and bottlenose dolphins.

Off the Road to Recovery

The spill occurred in a foraging area and migratory route for sea turtles, and federal aerial surveys indicated tens of thousands encountered the oil. New data from the National Research Council (NRC) show that a confluence of ocean currents likely brought large numbers of juvenile sea turtles into the region, creating the potential that many more were exposed to oil than previously thought. “This hotspot of turtle diversity hadn’t been suspected before,” says NRC Associate Nathan Putman. Roughly 500 sea turtle deaths each year were recorded in 2011, 2012 and 2013 in the northern Gulf, as many as five times more than normal, most of them endangered Kemp’s ridleys (below). 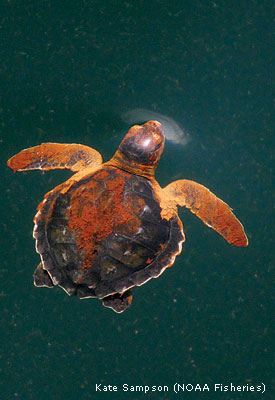 That’s especially troubling given that this species had been coming back from the brink of extinction, an inspiring victory. Thanks to an international conservation effort, the number of Kemp’s ridley nests rose strongly every year from 1995 to 2009. But  in 2010, they declined 35 percent. Nests dropped another 25 percent  in 2013 and 45 percent in 2014.

More research is needed to determine whether these declines are linked to the BP spill. Selina Heppell, a marine fisheries ecologist at Oregon State University, says the declines indicate changes in survival or reproductive rates, either of which could be related to the toxic effects of oil. Experts fear the spill has knocked Kemp’s ridleys off the path to recovery.

Dolphins have been suffering significantly, too. An ongoing unusual mortality event (UME)—an unexpected, significant die-off—for bottlenose dolphins in the northern Gulf that began two months before the spill reached 1,217 deaths as of December 2014, and stranding rates have been two to 10 times higher than historic levels ever since the spill occurred. Evidence links oil to poor health of dolphins in Louisiana’s Barataria Bay, which was subject to heavy and prolonged oiling, according to David Muth, director of NWF’s Gulf Restoration Program. Scientists evaluating dolphins in the bay found evidence of lung damage, hormone abnormalities and other diseases consistent with oil exposure.

The good news is that funds for restoration will come from fines and penalties associated with the disaster, and NWF is helping target that money to most effectively benefit wildlife. “We can’t undo what was done, but we can bring something positive out of it by ensuring that every penny flowing from the disaster supports scientifically sound restoration efforts,” Muth says.

In a 2014 report, Restoring the Gulf of Mexico for People and Wildlife, NWF recommends 47 specific projects. Many focus on estuaries, bodies of water where mixing fresh and salt water create habitats important to the life cycle of many marine animals, including sea turtles and dolphins. “Restoring Gulf estuaries would support a healthy food web and indirectly help both of these species,” says NWF Gulf Restoration Scientist Ryan Fikes.

NWF Affiliates on the Front Lines

NWF affiliates in all five Gulf states are working to make sure BP’s penalty fines are spent transparently on conservation projects that restore the ecological health of the Gulf of Mexico for people and wildlife. Here are a few examples of their efforts:

Alabama Wildlife Federation (AWF) has been a key partner in “100–1,000: Restore Coastal Alabama”—a project to build 100 miles of oyster reefs and plant more than 1,000 acres of marshland along the state’s coast. During the 2010 spill, AWF also worked with coastal landowners to develop alternative habitats for migratory shorebirds and waterfowl.

Florida Wildlife Federation (FWF) is backing efforts to create a science-based restoration plan for the Apalachicola River and Bay, to better protect significant systems such as St. Andrew Bay and West Bay and to restore the Everglades and estuaries of southwest Florida with the construction of the C-43 Reservoir on the Caloosahatchee River. FWF has also pushed for better policies regarding the regulation and use of dispersants and worked to restore 60,000 acres of wetlands on the Picayune Strand.

Louisiana Wildlife Federation (LWF) is working to slow the Mississippi River Delta’s catastrophic rate of wetlands loss.  On average, a chunk of wetlands the size of a football field erodes into the Gulf every hour. LWF and its grassroots activists are supporting a comprehensive plan to restore the Louisiana Coast, in part by reconnecting the Mississippi River with its wetlands.

Mississippi Wildlife Federation (MWF) advocates for projects that will restore the health of the Mississippi Sound and the state’s coastline. For example, one project aims to restore more than 11,000 acres of marsh in the Pascagoula River Basin, the largest unimpeded river system by volume in the lower 48 states.

Texas Conservation Alliance (TCA) works with a diverse coalition of partners to make sure that Texas’ share of the BP funding is spent on large-scale ecosystem restoration projects. For example, TCA supports a project to restore as many as 43,000 acres of marsh in the Salt Bayou wetlands complex near the Louisiana border.