Probing the Hidden World of Snow 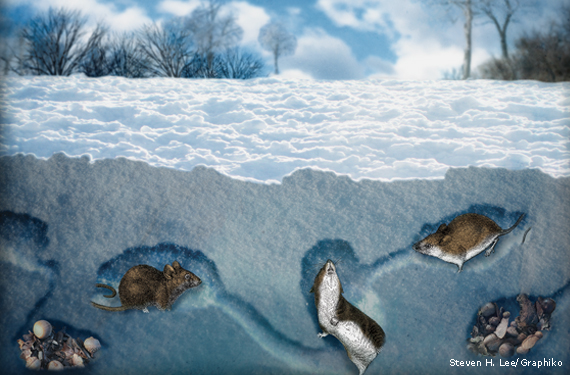 JONATHAN PAULI CAN WAX POETIC ABOUT SNOWSCAPES. He can talk about how beautiful the snow is as it blankets the land, how it makes the world seem so sleepy and serene. But he knows better. He knows that, rather than being still and silent, a snowscape actually bustles with energy and life.

A biologist at the University of Wisconsin–Madison, Pauli studies the subnivean zone—the deep snow layer that supports a surprising diversity of animals and plants. He first became interested in that space a few years ago while investigating the decline and northward movement of snowshoe hares in Wisconsin in the wake of climate change. As his attention turned to the snow beneath the hares’ feet, he found a region well worth exploring. “It was like this whole world that no one had really paid that much attention to before,” Pauli says. Now he worries that climate change may irreparably alter the world under the snow.

That many organisms use snow as a refuge against the cold of deep winter might seem counterintuitive, but in fact the deeper an animal digs into the snow, the warmer the ambient temperature becomes. Near the ground, snow traps heat that rises from the soil, maintaining temperatures that might be just below freezing, while the world above the snow may be bitterly cold. Perhaps more importantly, snow acts as a shield against the vagaries of weather, damping the effects of wind and otherwise wildly fluctuating conditions to create a stable environment. “I like to think of it as a thermal blanket,” Pauli says.

Scientists know that the list of organisms taking refuge in the subnivean (above) is long and varied. In the soil, microbes and fungi specially adapted to cold remain active throughout winter, sometimes forming dense mats called snow molds. Some insects, such as snow flies, even breed in snow. Freeze-tolerant animals, such as woolly bear caterpillars and some reptiles and amphibians, take a different tack: They spend winter in a state of torpor, essentially frozen solid. 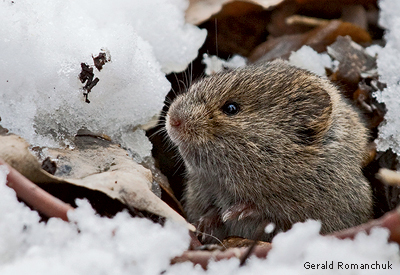 Under the snow, small mammals (such as this vole) take advantage of air pockets that form next to logs or branches, searching for seeds on which to nibble. Sometimes, weasels or other predators scamper after them in pursuit; foxes and owls might listen from above for the subtle scrabbling of snow-covered rodents. Grouse and ptarmigan plunge into snow on especially frigid nights to stay warm. And larger mammals, from porcupines to wolverines to bears, dig dens in snow for resting between bouts of foraging, raising families or hibernating during winter’s duration.

But Pauli worries that climate change threatens to upend this delicately adapted world in a number of ways. In the face of increasing temperatures, snow cover has declined throughout the Northern Hemisphere since 1970. Snow also has started to melt earlier in the year, moving the period of greatest snow cover from February to January. Scientists in Europe predict that the number of days with snow will have decreased by up to 80 percent at the end of the 21st century.

Counterintuitively, warmer winters do not necessarily lead to warmer temperatures for creatures of the subnivean. As winter temperatures increase, Pauli says, “the snowpack will be reduced, and snow density will increase.” Because warm air holds more moisture, snow—instead of being dry and fluffy—will become wet, dense and colder. Warmer temperatures lead to a chillier subnivean.

What the snowpack’s altered character means for the plants and animals that live in it is unclear. “The subnivean as a habitat is changing rapidly in ways that one wouldn’t predict,” says Ben Zuckerberg, a University of Wisconsin–Madison biologist who has studied the responses of birds to warming temperatures. Plants subjected to more frequent freezing and thawing could suffer significant tissue damage. For small mammals such as shrews and voles, temperatures that are both colder and more variable could also be bad news. “These animals have very precise energetic requirements,” he says. Even small changes that make the subnivean a little cooler could make it inhospitable to them.

For reptiles and amphibians, the consequences could be even more dire. Consider the wood frog. A small amphibian less than 3 inches long, the wood frog spends the winter as a tiny, living ice cube deep in the subnivean. It can withstand this condition because, prior to freezing, it suffuses its vital organs with glucose, a simple sugar that acts as a kind of antifreeze. Even though the frog doesn’t breathe and its heart stops beating, it is able to thaw out and hop away when spring arrives. But if the subnivean becomes cooler, the sugars in the frog’s tissues will no longer be able to prevent ice from forming in its blood, possibly leading to the frog’s death as it hibernates.

Still Diving Into the World Beneath Snow 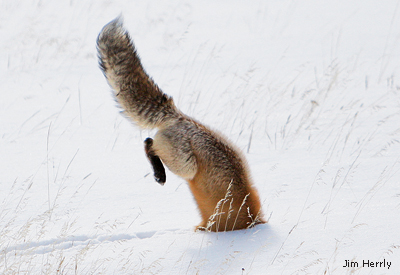 Pauli notes that, at this time, a lot of these prognostications are still conjecture. “For all of its importance as a winter habitat, the subnivean hasn’t been studied all that well,” he says. What is needed, he and Zuckerberg agree, is more precise information on just how the subnivean will react to the conditions expected under predicted climate scenarios. To that end, the two biologists have planned a series of experiments for upcoming winters that will help shed light on just that. With that information, they will have a sense of how better to manage species that might face significant habitat loss in the future.

In the meantime, Pauli will continue his own studies of snowshoe hares, porcupines and bears as they respond to changing winters, in some cases shifting their ranges to stay within conditions best suited to their life history. “The subnivean is a vital space for so many animals and plants,” he says. “It’s fascinating to study, but also sad to see it changing so much.”