As winters get warmer, birds once rare at northern backyard feeders are becoming more common during the cold months 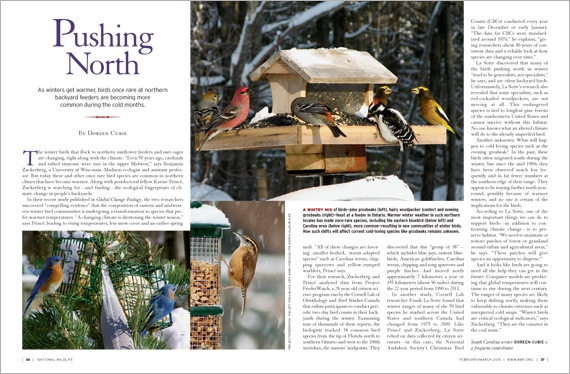 THE WINTER BIRDS THAT FLOCK to northern sunflower feeders and suet cages are changing, right along with the climate. “Even 50 years ago, cardinals and tufted titmouse were rare in the upper Midwest,” says Benjamin Zuckerberg, a University of Wisconsin–Madison ecologist and assistant professor. But today these and other once-rare bird species are common in northern climes that have become warmer. Along with postdoctoral fellow Karine Princé, Zuckerberg is searching for—and finding—the ecological fingerprints of climate change in people’s backyards.

In their recent study published in Global Change Biology, the two researchers uncovered “compelling evidence” that the composition of eastern and midwestern winter bird communities is undergoing a transformation to species that prefer warmer temperatures. “A changing climate is shortening the winter season,” says Princé, leading to rising temperatures, less snow cover and an earlier spring melt. “All of these changes are favoring smaller-bodied, warm-adapted species” such as Carolina wrens, chipping sparrows and yellow-rumped warblers, Princé says.

For their research, Zuckerberg and Princé analyzed data from Project FeederWatch, a 28-year-old citizen-science program run by the Cornell Lab of Ornithology and Bird Studies Canada that enlists participants to conduct periodic two-day bird counts in their backyards during the winter. Examining tens of thousands of these reports, the biologists tracked 38 common bird species from the tip of Florida north to southern Ontario and west to the 100th meridian, the nations’ midpoints. They discovered that this “group of 38”—which includes blue jays, eastern bluebirds, American goldfinches, Carolina wrens, chipping and song sparrows and purple finches—had moved north approximately 7 kilometers a year or 155 kilometers (about 96 miles) during the 22-year period from 1990 to 2011.

In another study, Cornell Lab researcher Frank La Sorte found that winter ranges of many of the 59 bird species he studied across the United States and southern Canada had changed from 1975 to 2009. Like Princé and Zuckerberg, La Sorte relied on data collected by citizen scientists—in this case, the National Audubon Society’s Christmas Bird Counts (CBCs) conducted every year in late December or early January. “The data for CBCs were standardized around 1970,” he explains, “giving researchers about 40 years of consistent data and a reliable look at how species are changing over time.”

Specialists Lose Out to Generalists

La Sorte discovered that many of the birds pushing north in winter “tend to be generalists, not specialists,” he says, and are often backyard birds. Unfortunately, La Sorte’s research also revealed that some specialists, such as red-cockaded woodpeckers, are not moving at all. This endangered species is tied to longleaf pine forests of the southeastern United States and cannot survive without this habitat. No one knows what an altered climate will do to the already imperiled bird.

Another unknown: What will happen to cold-loving species such as the evening grosbeak? In the past, these birds often migrated south during the winter, but since the mid-1980s they have been observed much less frequently and in far fewer numbers at the southern edge of their range. They appear to be staying farther north year-round, possibly because of warmer winters, and no one is certain of the implications for the birds.

According to La Sorte, one of the most important things we can do to support birds—in addition to confronting climate change—is to preserve habitat. “We need to maintain or restore patches of forest or grassland around urban and agricultural areas,” he says. “These patches will give species an opportunity to disperse.”

And it looks like birds are going to need all the help they can get in the future. Computer models are predicting that global temperatures will continue to rise during the next century. The ranges of many species are likely to keep shifting north, making them vulnerable to climate extremes such as unexpected cold snaps. “Winter birds are critical ecological indicators,” says Zuckerberg. “They are the canaries in the coal mine.”
South Carolina writer Doreen Cubie is a frequent contributor.
Garden for Wildlife

Become an NWF Wildlife Gardener. It's free, and you will receive great gardening tips and learn how to certify your yard.