News of the Wild: Ticks Thought to be Killing Moose

Parisitism causing adults and calves to be the "walking dead" 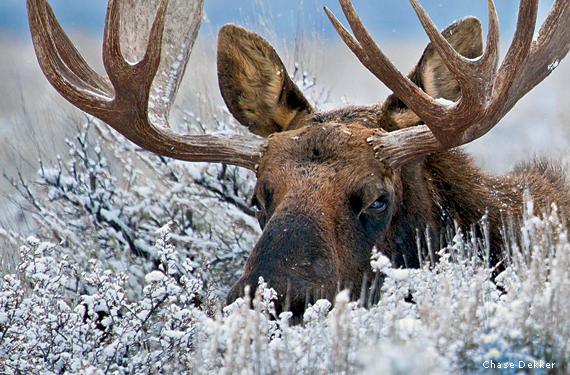 In “A DEEPENING MYSTERY” (October/November 2014), we reported that experts are trying to pin down the causes of moose declines in some northern-tier states. Data released after the article went to press have since provided new insight into the extent of the problem in two key New England states: Maine and New Hampshire. In both cases, the news is not good.

Based on studies initiated in January 2014, authorities in Maine concluded that moose mortality in the state was three times higher last winter than in an average year. Adult females were particularly hard hit; about 30 percent of them died. Many of their carcasses were engorged with winter ticks—parasites that have multiplied exponentially during recent shorter winters.

Though Maine is home to an estimated 70,000 moose—more than the number found in all other lower 48 states combined—officials announced significant cuts in the number of hunting permits issued for this year.

In New Hampshire, last year’s moose mortality rate also was unusually high. “People are really reeling in the North Country from the lack of moose,” says Eric Orff, a former New Hampshire state biologist who now works with NWF. Since 1997, New Hampshire’s moose population has declined by nearly 50 percent to about 4,000, with parasitism considered a major cause.

By reducing their hosts’ blood volume, winter ticks leave moose highly susceptible to other infections. “They’re like the walking dead,” says Orff. Sixty-four percent of the calves collared last year by Granite State researchers died from parasitism, and the problem may get worse. According to projections by the Union of Concerned Scientists, climate change could reduce New Hampshire’s snow season by 50 percent by 2050, boosting tick numbers even more.