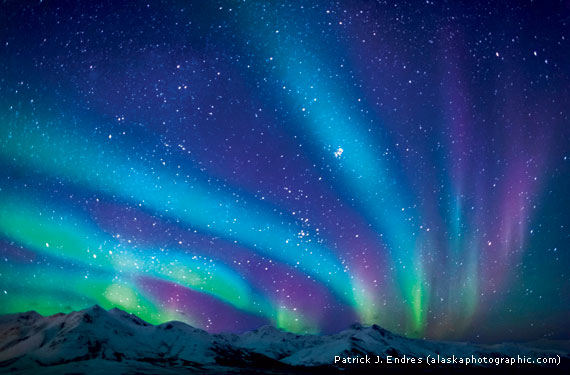 FINGERS OF LIGHT IN VIVID HUES arc through a midnight sky above the Brooks Range in Alaska—a favorite spot for photographer Patrick Endres to capture the Northern Lights. Though he has shot the spectacle hundreds of times during his 34 years in the state, he remembers this night as unique. “Blue is one of the more rarely seen colors,” he says, “and this unusual pattern lingered.”

Such shapes and colors are created when highly charged electrons from solar winds collide with elements in Earth’s atmosphere. The human eye easily sees the greens, but sensors in digital cameras reveal other colors in wavelengths beyond our perception. That’s part of the thrill of shooting the northern lights, says Endres, who has written a book about photographing this phenomenon (see alaskaphotographics.com). Yet Alaska’s magic goes beyond its night skies. “Part of the allure is the sense of epic space, the raw and rugged beauty,” says Endres. “It gets in your blood.” 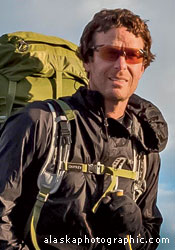