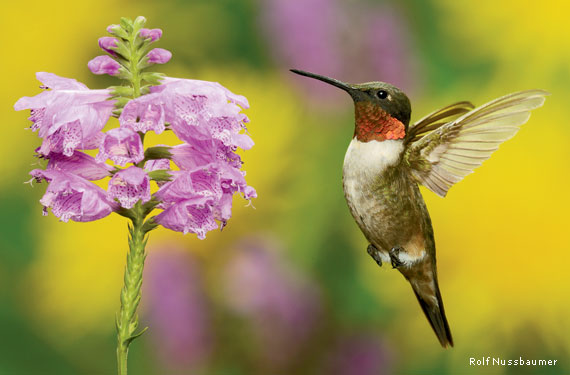 WITH WINGS CAPABLE OF BEATING as fast as 200 times per second and an ability to fly forwards, backwards, sideways and upside down, hummingbirds should be among the most difficult wildlife to capture with a camera. In fact, the opposite is true.

“The birds actually can be quite easy to photograph,” says Alan Murphy. “They’re generally not shy around people, and you can take pictures of them without a blind.” Once you have the proper equipment set up, adds Rolf Nussbaumer, “you don’t have to stalk them. They will come to you.”

Award-winning professional nature photographers, Murphy and Nussbaumer have made thousands of striking images of hummingbirds. In the process, the two have perfected techniques you can adopt to get similar results with your camera. Here’s their advice:

Lure Your Target. Because of their high metabolism, hummingbirds must consume the equivalent of their body weight in sucrose-rich nectar every day—a feat they accomplish by probing hundreds of flowers and by returning to reliable food sources such as feeders. The birds are particularly active in early morning when they awaken and in late afternoon before they go into a state of torpor at night.

“The more feeders you put out, the better chances you’ll have to photograph hummers, especially during spring and fall migration when more of them may be moving through your area,” notes Nussbaumer. Murphy takes a different approach: “On days when I’m shooting pictures,” he says, “I remove all the feeders in my yard except one. That way, I know exactly where to focus my camera equipment.” 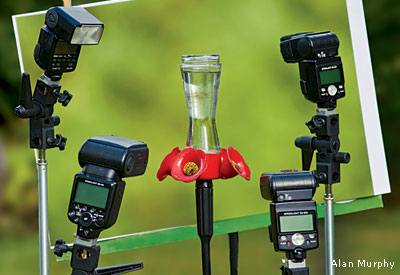 Simplify the Background. “With high-speed photography,” says Nussbaumer, “you can use a small aperture such as f/16 or f/22 to ensure the hummer is in focus, but doing so can make the background very busy.” The solution: Simplify the scene by hanging a screen or poster board (in plain green or another neutral color, right) directly behind the feeder, fastening it with clamps to a tripod or other support.

Set Up Multiple Flashes. When using a 300-mm or 400-mm telephoto lens, both photographers position their cameras about 10 feet from their subjects in shady areas to avoid picking up ambient light. They use multiple electronic strobes positioned at different angles to illuminate the action, including one or two aimed toward the feeder and background and two aimed at the bird. They recommend setting up the strobes 1 to 3 feet from a feeder and connecting them using sync cords so the flashes go off simultaneously.

"You don’t want your strobes to fire at full power,” says Nussbaumer. “If the duration of the flash is too long, it will blur a hummer’s wings.” Instead, reduce each of your strobe’s power to about 1/16th of full strength. Using multiple flashes will compensate for the shorter duration of each strobe.

Focus. Turn off the camera’s auto-focus, which may have difficulty zeroing in on the bird’s wings. Simply leave your camera focused on the spot where you expect the animal to probe for food. “A hummer will dip in to a feeder, then back away to check its surroundings before dipping back in for nectar,” says Murphy, who suggests waiting to snap the shutter until the bird backs away. “You’re more likely to get it looking at the camera and get the best angle to capture the iridescent colors of its gorget [patch of neck feathers].”

Go Natural. Hummingbirds have a remarkable ability to relocate quality nectar sources they previously visited. After the same bird returns repeatedly to a feeder, both photographers recommend replacing the feeder with a large and preferably red flower to attract the animal. Attach the flower to a tripod or bracket and sprinkle it with a few drops of sugar water. “You can create natural-looking images,” says Murphy, “while also helping the bird meet its nutritional needs.” 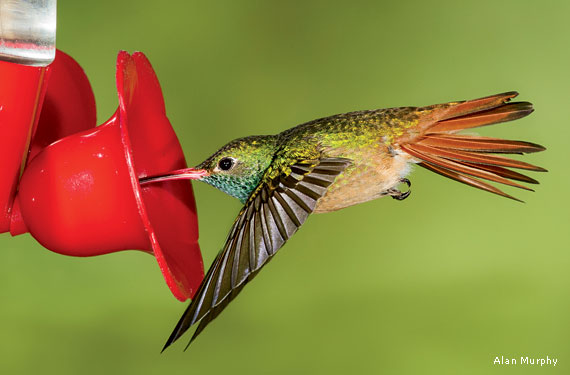 While backyard feeders supplement hummingbird diets and serve as magnets for photography, studies show that the birds prefer natural nectar over sugar water. Here are a few tips for creating a hummingbird garden:

• Cultivate a mix of native plants that have overlapping blooming periods to provide nectar most of the year.

• Favorite hummer plants include bee balm, cardinal flower, trumpet creeper, blood sage and red columbine. Check with a local native-plant society to learn which species are indigenous to your region.

• In breeding season, put out scraps of pet hair or other nesting materials and leave unmowed areas as habitat for the insects that hummers feed their young.