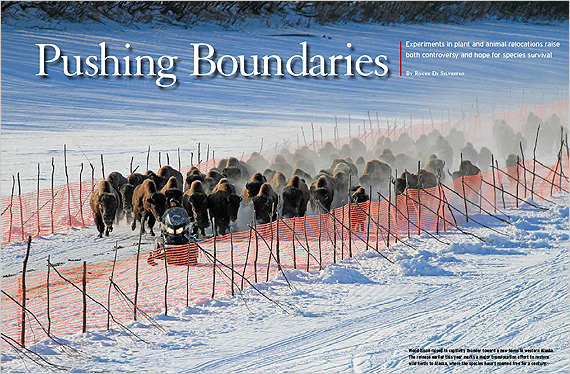 ONE OF THE WORLD'S MOST ICONOCLASTIC attempts at wildlife conservation is taking place right now in the mountainous wilds of British Columbia. It began in 2007, when the aptly named Sierra Curtis-McLane, a forestry graduate student at the University of British Columbia, hiked into the mountains carrying a burden worthy of a latter-day Johnny Appleseed—some 18,000 seeds from whitebark pines.

Native to the high, cold climes of the Rocky Mountains and Sierra Nevada, this pine species is in dangerous decline. An invasive fungus and voracious pine beetles have cut the number of whitebark pines in half across the tree’s range. In 2011, the U.S. Fish and Wildlife Service (FWS) concluded that the tree—whose seeds are a key food source for grizzly bears—warrants protection under the U.S. Endangered Species Act, and Canadian officials listed the pine as endangered in 2012.

Curtis-McLane was on a mission to test whether the pine’s range could be extended northward. She planted her seeds at sites in British Columbia up to 500 miles north of the species’ current range, in an area that computer models suggest will become suitable whitebark habitat as climate change warms the region. If the test proves successful, it offers promise for expanding pine habitat to the north as trees to the south die off.

Reason for cautious optimism is already apparent. Data published in 2012 suggest that about 20 percent of the seeds germinated, and more recent reports indicate that “the seedlings appear to be doing fairly well,” says Sally Aitken, a geneticist in the University of British Columbia’s Department of Forest and Conservation Sciences, who is overseeing the project. She hopes to have another student assess the trees in 2016. This and other research in the United States and Canada “will help inform strategies to conserve this keystone species,” Aitken says.

But she offers a caution: Any project designed to extend the whitebark pine’s range beyond current habitat must consider not just the biological potential but also the potential “changes to the recipient ecosystems,” such as competition between the new organism and native species.

Introducing species to areas outside their native ranges—often called assisted colonization or assisted migration—is a new and controversial wildlife management technique, but it is based on a solid foundation. For more than a century biologists have used wildlife translocations within species’ historic ranges to meet conservation goals—typically to help species survival or to engender ecological improvements. A 2014 Science paper, “Reversing Defaunation: Restoring Species in a Changing World,” reports that from 1900 to 2005 at least 424 animal species were translocated for conservation purposes, ranging from California condors and western pronghorn to black-footed ferrets. 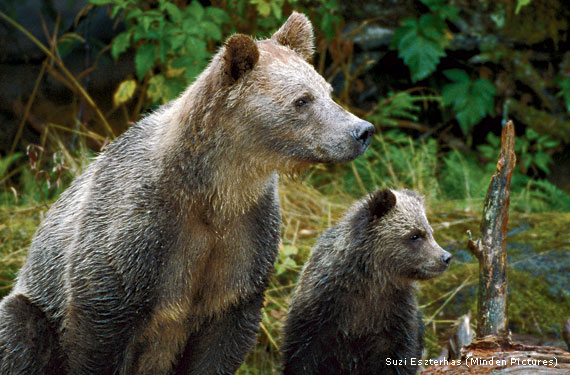 Traditional wildlife translocations fall into two basic categories: reinforcement and reintroduction. Reinforcement entails the release of a species into an area where it still survives but in numbers so low that the population will likely soon disappear if not augmented. For example, FWS’s 1995 release of eight female Texas pumas to augment genetic diversity of the dwindling Florida panther has helped increase the Florida population from about 30 animals to more than 100 today.

Reintroduction involves the release of animals into habitat where the species has become extinct. One notable example includes the release in 1995 of 14 gray wolves into Yellowstone National Park. Today, as many as 450 wolves range throughout the Greater Yellowstone Ecosystem. Among more recent examples:

• Wood Bison. Between March and June, the Alaska Department of Fish and Game released 130 wood bison into part of their former range near Alaska’s Innoko and Yukon rivers. Raised in captivity from Canadian stock, the bison form the first wild herd to roam in Alaska in more than a century. Their grazing will break up coarse grasses, restoring more open habitat for other species.

• Bighorn Sheep. Also in March, biologists in California moved about a dozen endangered Sierra Nevada bighorn sheep from national forest and park lands into Yosemite National Park as part of an effort to reestablish populations of bighorns across their former range. The species is beleaguered in many parts of the nation by development and competition with livestock, particularly sheep, which can infect the animals with pneumonia and other diseases.

• Beavers. In Utah, biologists are reintroducing beavers along streams to help ecosystems adapt to the impacts of climate change. As droughts become more frequent and intense, biologists are counting on the rodents to build dams that will provide water for other species, restore streamside plant growth and replenish groundwater by creating ponds.

“Reintroductions will likely become more important in achieving conservation goals,” says Bruce Stein, National Wildlife Federation senior director for climate adaptation and resilience. “The rate of biodiversity loss is speeding up as climate change, along with other human activities, puts the squeeze on more habitat.”

An even more radical approach to saving wildlife involves assisted colonization—moving a species beyond its traditional range, as with whitebark pine. “As climatic shifts accelerate, habitats within current range for many species will become increasingly inhospitable,” Stein says. “Consequently, among scientists, assisted colonization has become widely discussed and hotly debated as a climate-adaptation strategy.”

Recognizing the value of this strategy, the International Union for Conservation of Nature (IUCN) in 2012 issued new guidelines saying that assisted colonization may be appropriate where species protection “from current or likely future threats” may work better outside the species’ traditional range.

That approach is being tested with the Tasmanian devil, an Australian predator in serious decline because of a rapidly spreading, fatal cancer transmitted between animals usually during fights. To save the species, Australian biologists in 2012 began releasing uninfected individuals beyond their traditional range into Maria Island National Park, where isolation from mainland populations will shield them from the cancer. About 30 animals were released initially, and within a year they had produced 20 offspring, a significant sign of success. The island animals eventually may provide a reservoir of individuals that can be used to repopulate mainland habitat should the disease there be eradicated. 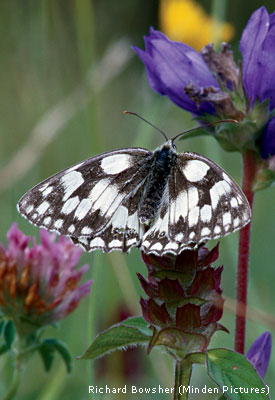 Many fish, birds and other mobile creatures that do not encounter insurmountable geographic barriers can shift to new habitats on their own, moving to cooler regions as present habitat warms up. However, such natural expansion may be impossible for other species. The Quino checkerspot butterfly of southern and Baja California, for example, is losing habitat at the southern end of its range because of heat and aridity from climate change that alters plant growth, but the insect can’t migrate north because urban areas block its movement and provide scant habitat.

Butterflies and other insects pose special challenges. In 2000, biologists from the University of Durham in England began experimenting with a means for helping stranded insect species. They released 500 marbled white butterflies in York’s Wingate Quarry—a wildlife preserve about 40 miles north of the species’ known range—in an attempt to protect the butterfly from climate change. By 2009, the project showed signs of success, with the butterflies increasing in number at the preserve and slowly expanding their range.

Perhaps the most-debated form of conservation translocation is ecological replacement, or “rewilding,” in which a species is released at a site outside its native range to restore an ecological function that has been lost because of the extinction of another, often related, species. “So if you still have the missing species somewhere else, you can reintroduce it,” says Philip Seddon of New Zealand’s University of Otago, lead author of the Science article on translocations. “But if that species is extinct globally, you might restore the missing function with a suitable substitute.”

For example, biologists in 2007 released 12 captive-raised Aldabra giant tortoises and 11 radiated tortoises on Round Island in the Indian Ocean, where native tortoises had gone extinct. “The aim of this rewilding project was to recreate missing grazing and seed-dispersal interactions because there was strong evidence that the native plant communities were suffering in the absence of a substitute species to perform these roles,” says Christine Griffiths, a British biologist working on the project. With subsequent releases, Aldabras today number 506 and radiated tortoises 17. Now starting to breed, the tortoises are suppressing the growth of exotic plants and helping spread seeds from palms and other native plants.

Some scientists fear that assisted colonization may create its own ecological problems, as the history of nonnative introductions has shown. Releases into the United States of the European starling during the 19th century and planting of Asian kudzu in the South for soil-conservation purposes, for example, caused serious problems as these species displaced native plants and animals. To avoid harming local biodiversity, assisted-colonization projects should involve rigorous planning and risk assessment prior to a species’ release and ongoing monitoring of the populations in ensuing years, Stein says.

Translocations will remain valuable tools for conservation. Aside from restoring habitats and enhancing ecological resilience, expanded wildlife populations can put more people in more contact with wildlife. As Seddon and his colleagues note, this helps “to reconnect people with their natural heritage, to engage them as conservation partners, and to make them stewards of the wild animals and habitats around them.”

The Federation has a history of supporting well-designed translocations to bolster dwindling or extirpated wildlife populations. Last year, for example, NWF helped reintroduce bison to tribal lands on the Fort Peck Reservation in Montana. To learn more, go to www.nwf.org/Wildlife-Conservation