Contrary to popular belief, scientists are discovering that most female songbirds are as musical as their male mates 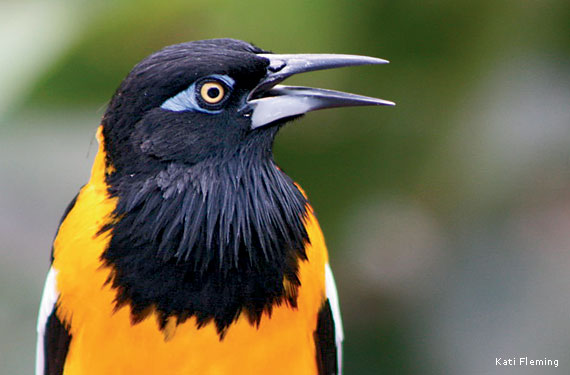 MOST PEOPLE WILL TELL YOU THAT—like a colorful warbler serenading his drab, silent mate—a bird singing loudly from the treetops in springtime must be male while the quiet bird beside him must be female. No less an authority than Charles Darwin said this nearly two centuries ago. Along with other so-called male ornaments—including brightly colored feathers, outrageously long tails and elaborate dances—song evolved among male birds, the thinking goes, to attract females and compete with rivals during the breeding season. But it turns out that most people, including Darwin, have gotten it wrong.

Darwin’s assumption is easy to understand. Living in England, he was familiar with songbird species in which males vie for females by singing the most beautiful and complex melodies, and females select a mate based in part on those criteria. Yet recent research by biologists at the University of Maryland–Baltimore County (UMBC) suggests that the idea female birds in general do not sing reflects where ornithologists live and work more than what birds actually do.

“A lot of the research on bird song has been done in North America and Europe, where you see brightly colored males, and they are singing,” says biologist and UMBC Ph.D. student Karan Odom. Birds in more tropical climes, where the majority of songbird species live, are different. In the Tropics, Odom says, most females sing just as long and loud as males, and many of them also are just as colorful—so much so it can be difficult for scientists to determine the gender of songbirds without catching the animals.

Odom’s unorthodox view originates with research she and her advisor, UMBC evolutionary biologist Kevin Omland, have been conducting on closely related species of oriole. In Maryland, Omland studies the Baltimore oriole and orchard oriole while in Puerto Rico, Odom and students from UMBC and the University of Puerto Rico work with the Venezuelan troupial, a widespread tropical oriole species, and the Puerto Rican oriole, a native found only on the island. All four species are members of the genus Icterus.

The researchers have discovered significant differences between the northern birds and their southern kin. In Maryland, orioles’ genders are distinct. Females are dull, green-brown and generally do not sing. Males are brilliant orange and black and definitely do sing. In the Puerto Rican species, females look just like males—both are colorful—and they sing, often in duets, with one bird beginning and his or her mate following.

What explains these differences? The biologists say clues lie in behavioral and life-history distinctions between northern and southern orioles. In Maryland, the birds are present only during the spring and summer breeding season, after which they migrate to Latin America for the winter. Orioles in Puerto Rico never leave breeding territories.

According to the researchers, male birds in Maryland are in a hurry. They need to secure territories, attract mates, reproduce, rear their young and migrate south before fall arrives—meaning males must quickly grab females’ attention and fend off competitors with bright colors and vibrant songs.

In Puerto Rico, where orioles breed year-round, the competition instead is for resources such as food. Both males and females engage in this competition, and both employ color and song to advertise their prowess. Gender roles on the island are more equal, with females often defending males as well as the pair’s territory. “Both sexes are very progressive,” jokes Omland. “Both wash the dishes.”

Does what the researchers discovered about orioles in Puerto Rico and Maryland hold true for other songbirds elsewhere? “Some of the reasoning behind our study is that scientists have long known that songbirds originated in Australasia, where a lot of females sing,” Odom says. She, Omland and their colleagues decided to find out how common female birdsong is worldwide. 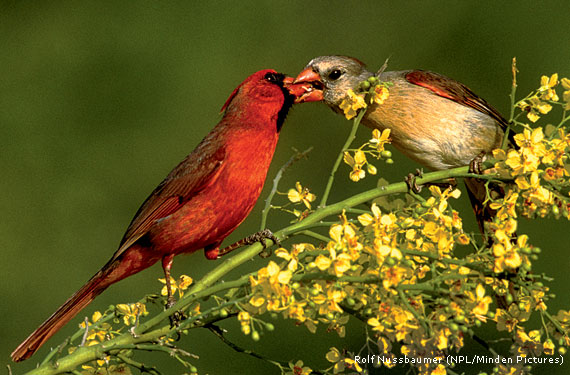 To do so, they reviewed a variety of handbooks and guides, including the 16-volume Handbook of the Birds of the World. Of the 1,141 species the researchers analyzed—representing 32 songbird families living on every part of the planet—they found that female crooners are far from rare. In fact, 71 percent of surveyed species have females that sing, far more than they expected.

Next, the scientists overlaid, or mapped, their survey results on what is known as a phylogenetic tree. Similar to a human family tree, it shows relationships among species, or family members, based on the animals’ genetics. “After mapping our birdsong data to proper places on the tree, we could calculate the probability that the common ancestor of all birds had singing females,” Odom says. “Our probability was very high.” In other words, it’s likely that females sang in the first songbird species to evolve roughly 60 million years ago.

Published in Nature Communications in 2014, the biologists’ findings were so surprising they made headlines worldwide. They even surprised some fellow scientists. “This research has thrown out the window a long-held assumption about birdsong: that evolution has favored singing by males alone,” says Michael Webster, an ornithologist at Cornell University in Ithaca, New York. “Now we need to go back and rethink the reasons why birds—as well as other animals—produce song at all.”

Joel Shurkin is a science journalist based in Baltimore, Maryland.

All the Little Birdies Go Tweet Tweet Tweet
A Song for Every Occasion
The Case of the Disappearing Warbler
Mockingbirds: Nature's Master Mimic
Singing in the Brain: How Songbirds Learn to Sing
More Birds and Birding Articles from National Wildlife