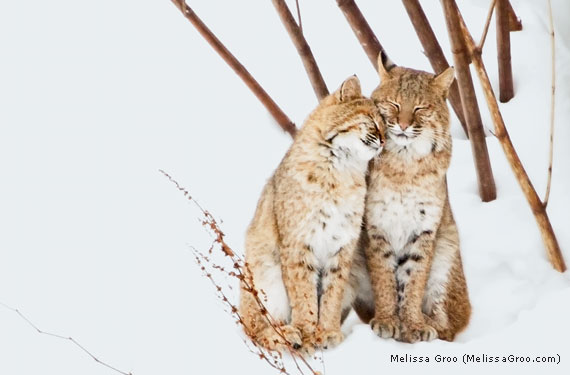 OBLIVIOUS TO THE BITE OF WINTER, a young bobcat snuggles its mother as the pair takes a break from feeding. Long eager to photograph bobcats but unable to spot the furtive hunters, conservation photographer Melissa Groo was thrilled when a neighbor called early one morning to report seeing bobcats feeding on a deer carcass beside a road just 2 miles from her home near Ithaca, New York. Groo raced to the site and, over two days, was able to capture memorable images right from her car window. “It was one of the greatest photography opportunities of my life,” she says.

That’s saying a lot. Groo travels the world to photograph wildlife but prefers subjects that have been “vilified or regarded as varmints,” such as coyotes and bobcats. “I want to show that these animals have relationships and bonds and are important parts of our ecosystems.”

Though Groo spent years working in Africa, this image—made close to home—is closest to her heart.