Celebrating the Victories of the National Wildlife Federation and Its Affiliates 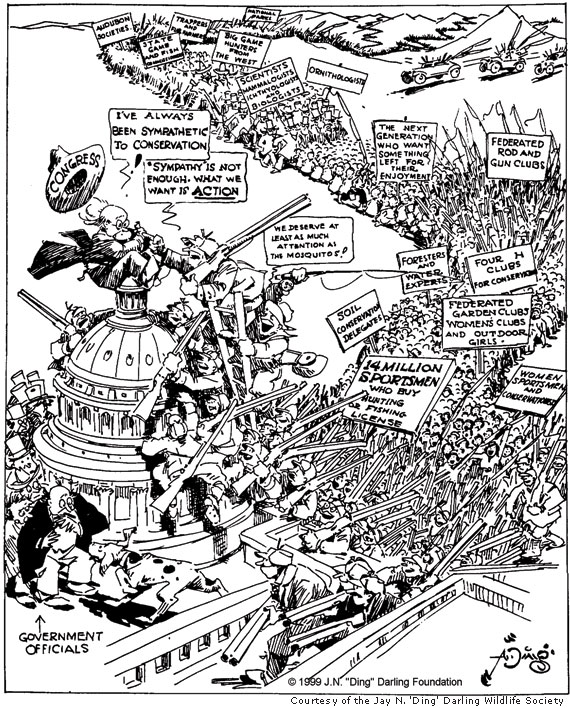 WHEN CONSERVATIONIST AND PULITZER PRIZE–WINNING CARTOONIST J.N. “DING” DARLING stood before attendees of the first North American Wildlife Conference in Washington, D.C., in 1936, he saw hundreds of seemingly disparate people, from hunters and anglers to gardeners, birders and farmers. Yet Darling’s illustration (above)—first published in the Des Moines Register—depicted their mutual frustration that more needed to be done to conserve America’s dwindling wildlife. Darling implored the groups to unite: “Out of this meeting must come a definition of our common aims.”

State representatives from organizations that attended the conference soon formed the National Wildlife Federation, with Darling as its first president. Eighty years later, the mutual passion of the current state affiliates keeps them working side by side in a nonpartisan approach to conservation. As NWF President Collin O’Mara says, “Whether I’m speaking to a very conservative crowd or an extremely liberal audience, I find that folks who may not agree on much else consistently agree on the need to safeguard the nation’s wildlife for future generations.”

NWF affiliates, based in most U.S. states and territories, are autonomous conservation organizations with impressive accomplishments—from restoring degraded wildlife habitat and protecting endangered species to inspiring thousands to care about nature. Some do this work with only a handful of volunteer staff. They also elect NWF’s officers and 13 regional board members and propose and vote on conservation resolutions that set NWF policy priorities. Working together on a myriad of national environmental issues and legislation, affiliates have helped NWF change the nation’s conservation landscape.

Like blocks of an American quilt, each affiliate has its own story and victories. Yet woven together into a Federation, we reach almost 6 million supporters nationwide. Dedicated to saving wildlife and habitats for future generations, NWF’s potential is limitless.

A Sampling of Recent Affiliate Victories

On November 6, 2015, President Obama rejected TransCanada’s permit application for the proposed Keystone XL pipeline, which would have transported tar-sands oil from Canada to Texas. Federation members and supporters sent more than 336,000 comments to the U.S. Department of State urging rejection of the project because of concerns about carbon pollution and pipeline leaks. Working with NWF and other conservation groups, affiliate Nebraska Wildlife Federation was one of the first organizations to flag concerns about the pipeline, initially designed to cut through Nebraska’s Sandhills and Platte and Niobrara Rivers, critical habitat for migrating waterfowl. www.nebraskawildlife.org

Restoring Bison to the West 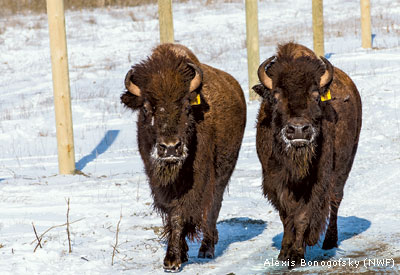 Bison that wander out of Yellowstone National Park are at risk of being shot by those who suspect they could carry disease to cattle. NWF, American Indian tribes and other partners have been working for 20 years to protect bison from this fate, including transferring more than 200 former Yellowstone bison to Montana’s Fort Peck Indian Reservation (right) since 2012 and 10 others to Colorado’s Soapstone Prairie Natural Area this past November. NWF affiliate Montana Wildlife Federation has been key in defeating bills that could have banned bison relocation within Montana and led other states to follow suit. www.montanawildlife.org

In September, a federal court approved a settlement requiring the U.S. Navy to adjust its current naval training and testing plan off Hawai‘i and Southern California by limiting mid-frequency sonar and explosives during certain times and in some areas critical to whales, dolphins, seals and sea lions. The settlement will remain in effect until the Navy’s plan expires in December 2018, resolving a lawsuit on behalf of Earthjustice, NWF affiliate Conservation Council for Hawai‘i and other groups. Navy sonar has been correlated with mass whale strandings, including some 200 melon-headed whales off Kaua‘i in 2004. www.conservehi.org

As part of the Buffers Now Coalition, NWF and affiliate Minnesota Conservation Federation successfully pushed for a state law requiring landowners to provide at least 50 feet of natural area between development or agriculture and public rivers, streams or ditches and 16.5 feet on both sides of public drainage systems. Passed in June 2015, this law could create roughly 110,000 acres of habitat for ground-nesting birds, pollinators and other wildlife while helping protect waterways from erosion and polluted runoff. www.mncf.org

In September 2015, endangered shortnose sturgeon swam in a section of Maine’s Penobscot River for the first time in more than a century, evidence that the removal of two dams has improved flow in the state’s largest watershed. This effort was part of the Penobscot River Restoration Project, which NWF affiliate Natural Resource Council of Maine, the Penobscot Indian Nation, dam owners, state and federal agencies and others have collaborated on since 2004. A fish bypass around another dam will be used for the first time this spring, when fish swim to spawning areas. This will improve access to nearly 1,000 miles of habitat for endangered Atlantic salmon and American eel as well as nine other native, diadromous species, which live in both fresh and salt water. www.nrcm.org