School Hero: Fostering Growth Inside and Out 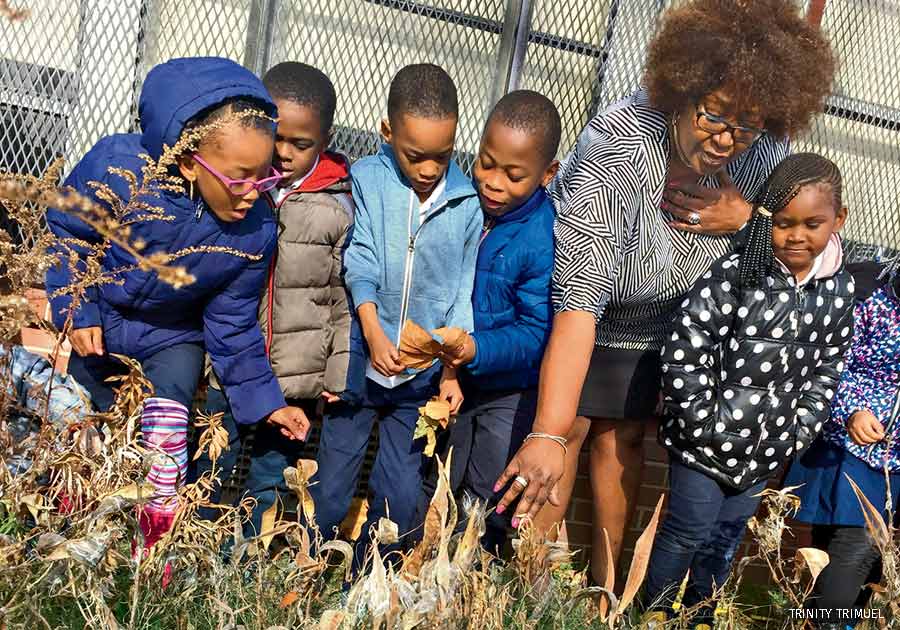 “What do you see?” Principal Terry Patton helps eager kindergartners spot insects and other life in the fall foliage of their pollinator garden outside Franklin Square Elementary School.

“BE THE REASON SOMEONE SMILES TODAY.” This is one of many inspiring signs lining the halls of Franklin Square Elementary/Middle School in Baltimore, Maryland. It’s a school in a tough part of town whose principal, Terry Patton, has the perfect mix of tough and tender to bring smiles—and pride—to the students she calls “our scholars.”

Plenty of smiles blossomed last June when a new program—hosted by the National Wildlife Federation, its affiliate the National Aquarium and other partners—helped the school put in a pollinator garden as part of an effort to teach students about nature while providing habitat for bees, butterflies and other creatures. The lesson took root faster than anyone could have dreamed.

“The kids were so excited,” says kindergarten teacher Trinity Trimuel, head of the school’s Green Team, which oversees the project. “They would ask questions like, ‘Is there more than one kind of beetle?’ And they were thrilled when they found a chrysalis—a new vocabulary word for them. Now, instead of thinking bugs are nasty, the kids are careful not to swat at bees because they know how important pollinators are.”

The budding naturalists are gaining more than a chance to dig in the dirt, play outside and spot butterflies. “Our scholars are proud of their garden,” says Patton. “It gives them self-esteem.” A farmer’s daughter who grew up on Maryland’s Eastern Shore, Patton acknowledges that “many of our kids walk home and don’t see trees. They have no idea how important nature is.” But the garden helps change that. “It gives them balance,” she says. “It helps make them whole.”

Building on this positive success, the school and its partners installed three more pollinator gardens last September, and it’s now one of 10 schools in southwest Baltimore City that are creating essential pollinator habitat through NWF’s Schoolyard Habitats® program. Franklin Square is also applying for a grant to create a neighborhood garden to enlist families and others in the effort to garden for wildlife—and for themselves.

“Nature is important,” says Patton. “I want the children, the teachers and everybody here to be able to say we left something special for the neighborhood.” That special gift is already apparent in the smiles on the students’ faces each time they visit their garden.

Lisa Moore is the Editorial Director.