Once abused and neglected, this D.C. river is enjoying urban renewal, which may help—or harm—a surprising range of wildlife 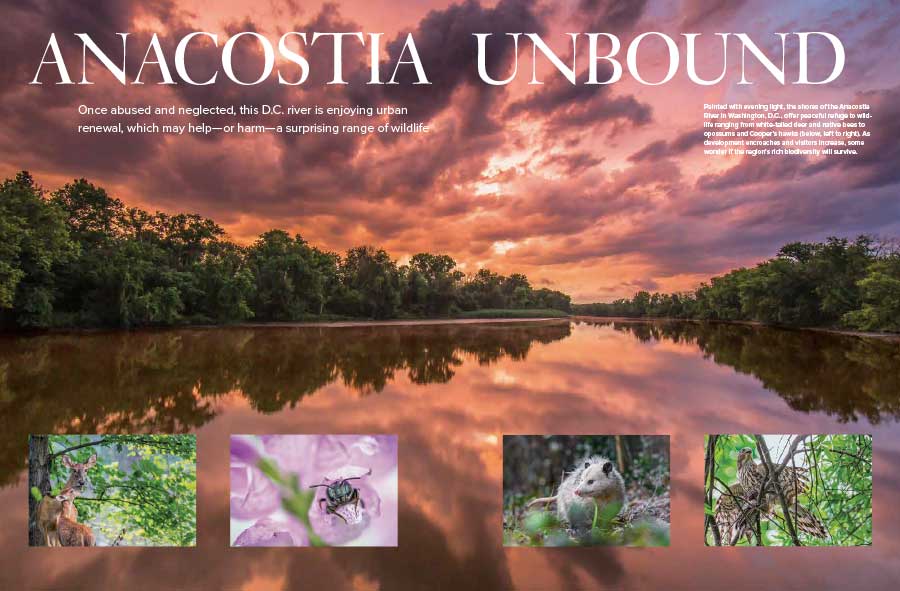 Painted with evening light, the shores of the Anacostia River in Washington, D.C., offer peaceful refuge to wildlife ranging from white-tailed deer and native bees to opossums and Cooper’s hawks (left to right). As development encroaches and visitors increase, some wonder if the region’s rich biodiversity will survive.

FOR WILDLIFE PHOTOGRAPHER Krista Schlyer, the magic of the Anacostia River arrived when she felt an unexpected thunk while kayaking on the river back in 2010. She thought she had hit a log, but was surprised when a beaver popped out from under the hull, then drifted off unscathed. That chance encounter inspired Schlyer to begin to document all the wildlife she could find along the river. After eight years, she’s still being surprised.

Eagles and ospreys soar overhead. Herons and egrets hunt along the shores. White perch, striped bass and catfish ply the waters while turtles, frogs, red foxes, otters and deer wander the banks and forests. Indeed, the Biodiversity of the Anacostia River Project has identified more than 1,300 plant and animal species in the Anacostia River Watershed, an abundance of nature in an unlikely place. “There’s amazing biodiversity in the nation’s capital along a river once destroyed and neglected,” Schlyer says.

The days of neglect for what was once called D.C.’s “forgotten river” appear to be over. In January, D.C. Mayor Muriel Bowser named 2018 the “Year of the Anacostia,” announcing a grant of $4.7 million to promote outdoor education and recreation on two long-neglected river islands, Heritage and Kingman. A massive new section of sewer tunnel, finished in March, now diverts 80 percent of the more than 2 billion gallons a year of sewage and storm water that dumped into the river after rainstorms. (Additional projects will cut that inflow 98 percent by 2023.) And new parks, hotels, condos and bike trails are popping up or planned throughout the region.

Such transformation may bring welcome benefits to residents and visitors. But conservationists wonder if the wildlife that has survived neglect can survive being loved. “Developed habitats offer little to no value to most wildlife species,” Schlyer warns. 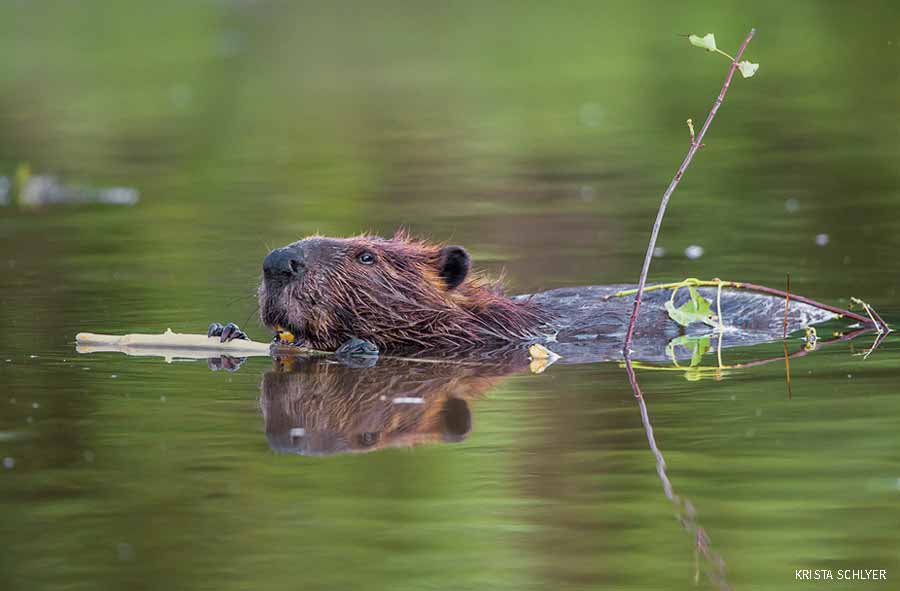 The serene swim of a beaver in the Anacostia River contrasts with a clog of trash along Watts Branch, a major tributary. The city put green dye in the water (below) to help trace possible routes of toxic contaminants, a legacy of abuse that’s beginning to change.

To understand the river’s new fame, it helps to understand its history, both natural and man-made.

The Anacostia got its name from the local Nacotchtank Indian people, whose word “anaquash” meant “village trading center.” In 1608, when Captain John Smith sailed and mapped the river, he found its forested watershed teeming with wildlife, including wolves, bears, bison and elk. Europeans settled the region in 1634, clearing the land for tobacco plantations. And in 1790, when George Washington sought a site for the nation’s new capital, he chose a spot bordered by two picturesque rivers—the Potomac on the southwest and the Anacostia on the southeast. 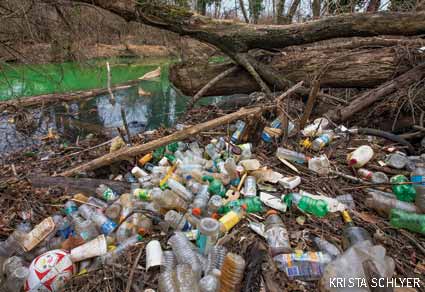 That historic honor led to mayhem for the river. By the mid-1800s, silt from area plantations had filled its once-deep channel, and it was abandoned as a commercial waterway. Human and animal waste from the booming capital city flowed freely into the river, where tainted mudflats began breeding malarial mosquitoes. As time passed, humans dredged channels, filled wetlands, dumped trash and allowed pollutants— from agricultural runoff to industrial chemicals, coal ash, heavy metals and raw sewage—to pour into the river. By the time the Clean Water Act was passed in 1972, the Anacostia was considered one of the most polluted rivers in the United States.

Many turned a blind eye to the pollution and neglect, in part because the river flowed through the eastern edge of the city, home to D.C.’s poorest neighborhoods. With disregard for human health, a landfill on the river’s eastern shore was allowed to burn rubbish openly until a local boy was trapped in the fires and died in 1968. Seen more as a wasteland than a resource, the river became the final resting place for old refrigerators, tires, toilets and trash. 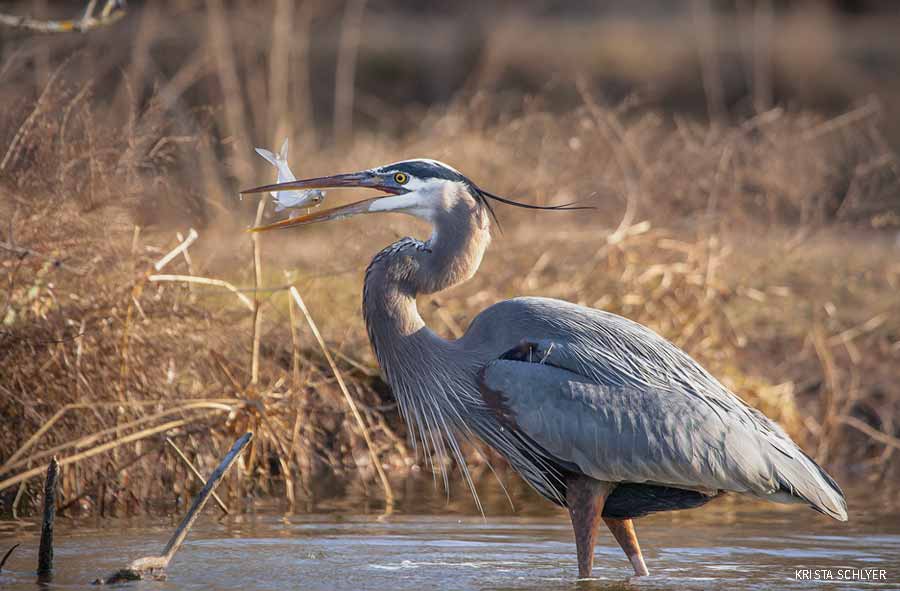 Life abounds in the Anacostia River Watershed, where photographer Krista Schlyer caught these portraits of a great blue heron and tiny mantid (below) perched on mountain mint.

A watershed worth saving

But seen in its entirety, the river is a resource worthy of respect. The Anacostia River Watershed covers 176 square miles of the District of Columbia and Maryland’s Prince George’s and Montgomery counties—a region now home to more than a million people. Thirteen major tributaries feed into the Anacostia, whose main stem meanders for some 8.5 miles before it drains into the Potomac, which then flows into the Chesapeake Bay.

Today, a trip up the river captures both the region’s grim history and its revival. Northward from the river’s mouth stretches 100-year-old Anacostia Park run by the National Park Service. Though an ugly stew of plastic trash taints the riverbanks, the park’s lawns, picnic tables, playgrounds and paths provide healthy relief for the much-neglected community to the east, where the median family income is just $24,000. 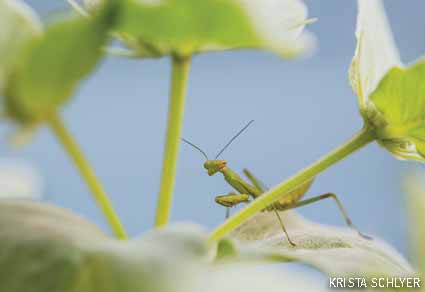 North of the islands, land that was once the burning dump is now filled and leveled, with fields and forest that support birds and pollinators. Farther north lies the 700-acre Kenilworth Park and Aquatic Gardens, a tidal wetland where summer water lilies and lotus flowers stretch far into the distance. And across the river, the National Arboretum offers 446 acres of green gardens, mature conifers and deciduous trees, home to a nesting pair of bald eagles. 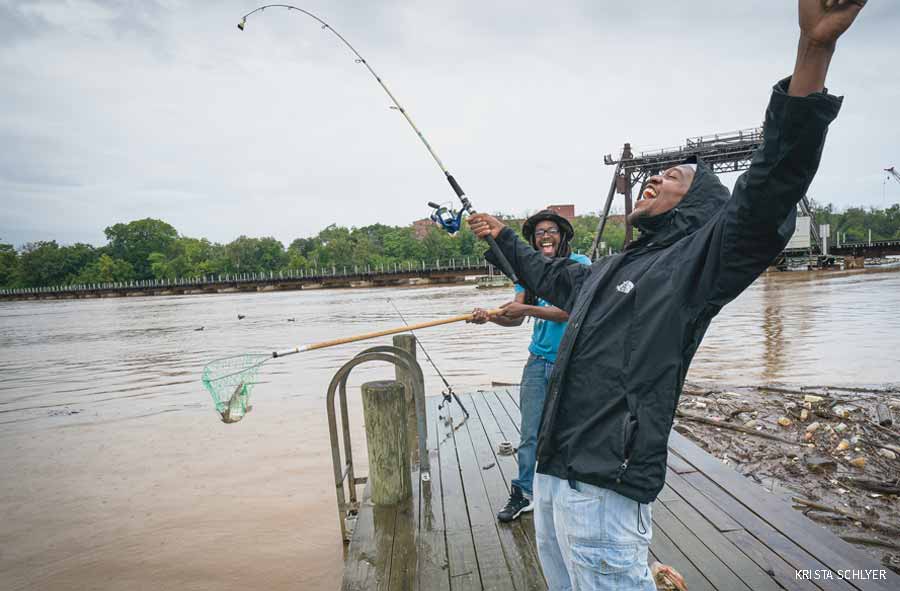 Despite a steady drizzle, Byron Coleman (background) and his cousin William Mitchener exuded joy as Mitchener caught a fish during his first time fishing on the river. “He said he felt like dancing,” recalls Schlyer. But the fish was just for fun—not for dinner.

Local people on a mission

It is up here, in these forested reaches, that the Anacostia feels most remote, almost pristine. “When you’re out here, you can forget you’re in Washington, D.C.,” says Dennis Chestnut, who lives just a few blocks from the Anacostia River on the east side of the city. Now 69, Chestnut used to swim in the river as a kid in the 1950s, oblivious to its toxic past. “You don’t know what you don’t know,” he says. He sometimes also played in Watts Branch, one of the feeder streams to the Anacostia, which he could see from his house. “We caught salamanders, snakes—but the real prize was a crawfish,” he recalls. “We were doing macroinvertebrate sampling; we just didn’t know it!”

Concerned about the environment and quality of life along the river, in 2009 Chestnut founded Groundwork Anacostia River D.C., a nonprofit dedicated to converting contaminated land into parks, trails and green space. (He retired as its executive director in 2016.) One of the group’s key projects has been to maintain four litter-catching traps on Watts Branch and other tributaries. Together, they grab more than 25,000 pounds of bottles and debris headed for the Anacostia each year.

Chestnut is one of many local people dedicated to helping their community and their river. Another is Brenda Richardson, former director of the nonprofit Earth Conservation Corps (ECC), an affiliate of the National Wildlife Federation.

The group was founded in 1992, when nine unemployed young people decided to clean up Lower Beaverdam Creek, another trash-filled tributary. Since then, ECC has led scores of clean-ups, tree plantings, wetlands restoration efforts and educational projects designed to serve both the river and D.C.’s urban youth. Most of the group’s volunteers are local youth from nearby neighborhoods, which are among the city’s toughest. Sadly, 26 of those workers have died since 1992, many of them murdered. Pictures of the dead hang in honor on ECC’s walls.

Staff are proud of what ECC has accomplished, particularly through its “Raptor Watch” program, which is dedicated to educating students about birds of prey and to supporting eagles and ospreys living along the river. In 1994, ECC launched a project that released 16 bald eagles over four years in Washington, D.C. Three pairs have since returned to nest in the city, and eagle cams monitor two of the nests, whose eagles feed on fish from the river. “Oh my God, the river is getting so much healthier!” exclaims Richardson. 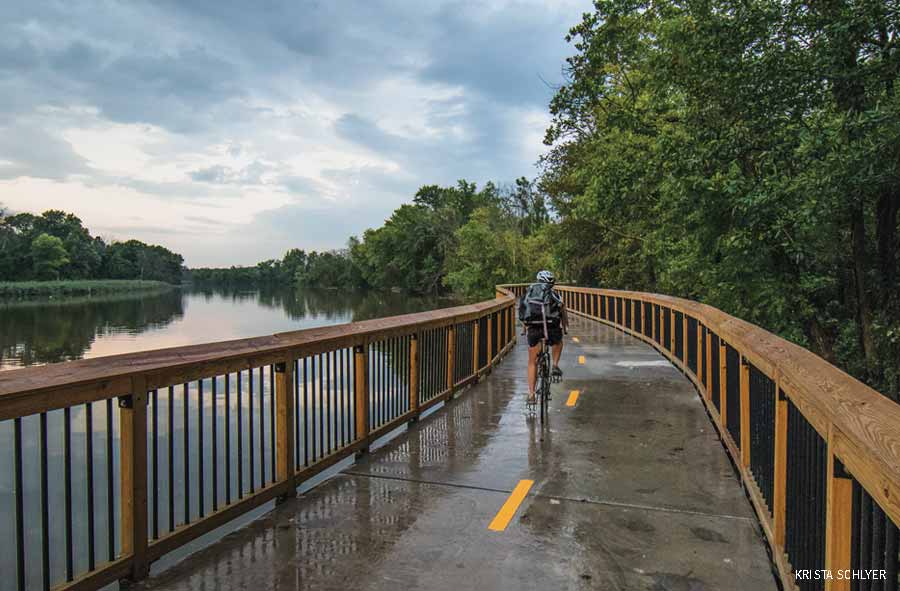 Like a study in colors and curves, a harmless brown snake (below) curls near a vivid mushroom on Maryland’s Paint Branch tributary, and a bicyclist threads a path that runs along the nearly 9-mile course of the Anacostia. Recently built, this trail is one of many new attractions luring visitors to the river’s once-isolated shores. As more people come to enjoy—and transform—the river, will its wildlife suffer?

The Anacostia’s sediments are still so tainted that swimming is banned, and some fish are unsafe to eat. However, the city hopes to declare the Anacostia swimmable and fishable by 2032, a goal aided by the huge new sewage-diversion project opened in March. Silt testing is underway, and planners are studying dredging and capping (or sealing) as means to remove or contain pollutants.

At least 17 nonprofits are working to improve the river’s health, and public-private efforts are reaping rewards. A ban on styrofoam food containers and a nickel tax the city levies on plastic bags are reducing the amount of plastic in the river, and more than $10 million of the bag-tax revenue has supported efforts of the Anacostia River Clean Up and Protection Fund.

Economic revitalization parallels river renewal. Along the Anacostia’s western shore, the Nationals Park baseball stadium and a new stadium for the D.C. United soccer team are spurring growth of high-rises, restaurants and shops. Capital SUP, a stand-up paddleboard and kayak rental company, opened last summer—and a muskrat has taken up residence under its boat shed. And Buzzard Point, a knob of land south of Nationals stadium, was just approved for a $250 million real-estate project. 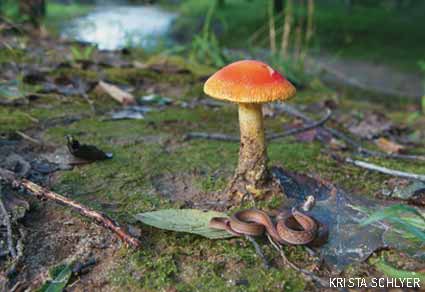 This worries wildlife lovers. Buzzard Point provides habitat for river-cleaning vegetation and eight species of freshwater mussels. When such habitat is fragmented or paved—even under new, stricter water-quality guidelines—wildlife may suffer. The city’s wildlife management plan notes that even recreational development for trails or parks poses a threat. “Recreation draws people, and people tend to drive wildlife away,” says Schlyer. Chestnut agrees that developers need to be mindful of the Anacostia’s non-human creatures. “I consider the wildlife the first residents,” he says. “For all of us, it’s an ecology, and we’ve got to figure out how to co-exist.”