Feeders can help birds survive the winter but also spread disease if not properly maintained. 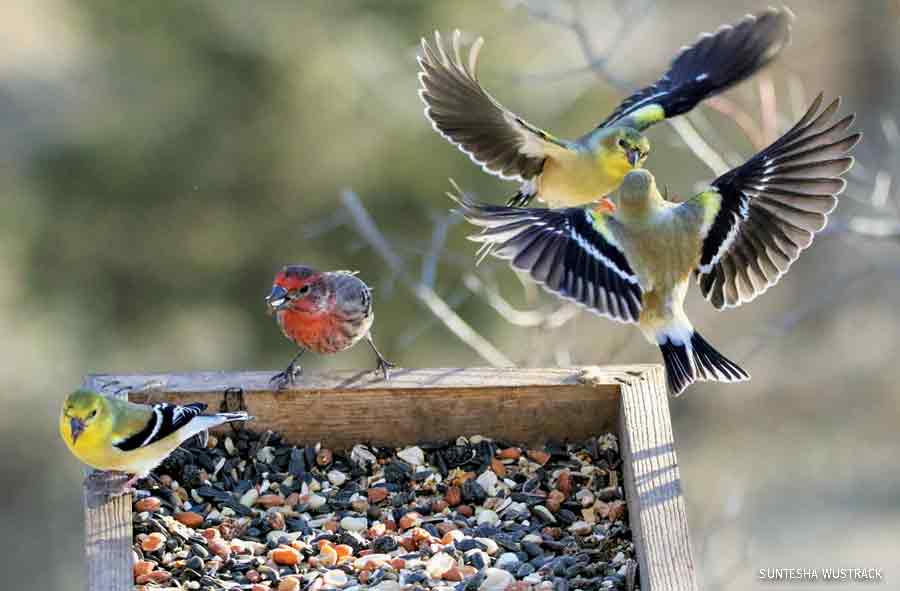 Goldfinches and a house finch jostle for seed at a table feeder. Since sick birds can sit on food, table feeders are rarely the best choice.

UNTIL 2005, A SMALL SONGBIRD called the greenfinch was common across Great Britain. Today, its numbers have plunged by 35 percent due to the emergence of a disease called finch trichomoniasis. Usually transmitted at backyard feeders, finch trichomoniasis has not yet been detected in the United States. It has, however, been found in Canada’s Atlantic Provinces, where it has killed purple finches and American goldfinches. Biologists believe it could move easily into this country, where it would join other deadly diseases already spread at feeders, including salmonellosis, aspergillosis, conjunctivitis and avian pox.

Despite these threats, Travis Wilcoxen, a biologist at Millikin University in Illinois, says people do not need to stop feeding birds. But Wilcoxen, who has studied feeder birds for many years, adds that backyard birders should take steps to minimize the risks. “Take your feeders down once a week and soak them in a bucket of bleach solution,” he says. “Rinse them and let them air dry before you fill them up again.” He also recommends putting out fewer feeders and spreading them out. “Place them in different parts of your property,” he says, and only put out the amount of seed that will be eaten in a couple of days.

Here are additional actions you can take to reduce the risk of spreading disease through your backyard bird feeders:

• Before soaking feeders, scrub them thoroughly to remove debris.

• Keep the area around feeders clean. Use either a broom and shovel or a wet-dry vacuum to pick up spilled food and droppings.

• Use quality seed and store seed in rodent-proof containers. Mice can carry some bird diseases without being affected themselves.

• Avoid table or tube feeders. When sick birds sit directly on seed at table feeders, they are more likely to contaminate it. With tube feeders, birds put their heads right next to ports to get the seed, which can spread conjunctivitis, or pink eye. If you do use tube or table feeders, be especially diligent about cleaning them.

• Enlist your neighbors. Because birds move around between backyards, diseases can spread easily unless everyone is taking precautions. If anyone sees sick or dead birds, stop feeding them for at least two weeks.