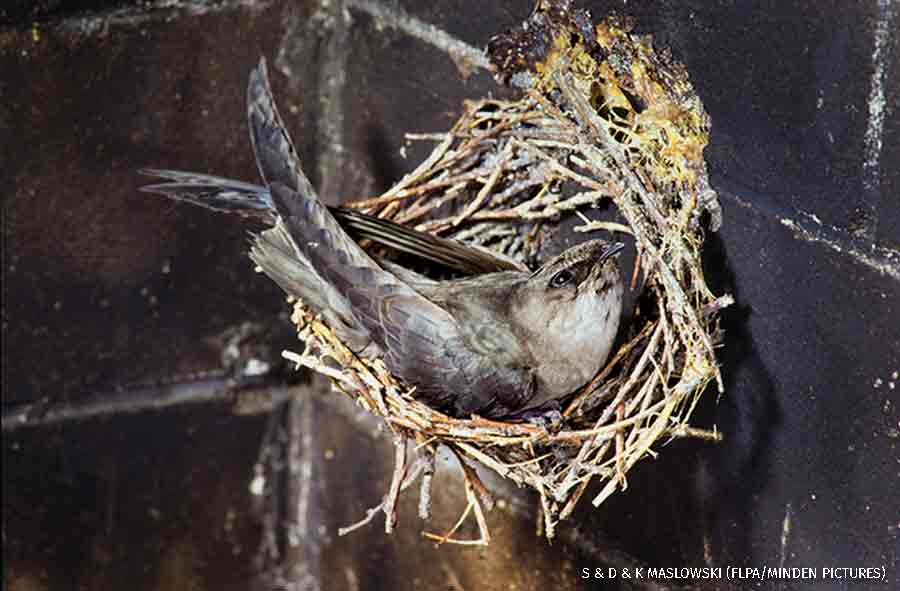 Like squadrons of tiny jets, chimney swifts circle and dive into an Oregon smokestack (below). Using gluelike saliva, they attach nests to vertical surfaces (above). A swift tower built in Black Mountain, North Carolina (bottom), will help the birds survive.

THE ONCE-FAMILIAR sight of flocks of twittering chimney swifts diving into open chimneys to nest or roost has become less common across the United States. According to the annual North American Breeding Bird Survey, the species’ population has decreased more than 70 percent since 1966—largely due to the loss of suitable nesting sites. 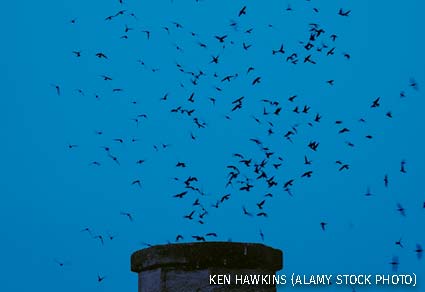 Long ago, these aerial insectivores nested in the tall, hollow trees of old-growth forests. As those forests vanished, the adaptable birds began using chimneys. The rough masonry interiors suit swifts, which use gluelike saliva to attach nests made of twigs. But in recent decades, “many chimneys have been removed or capped,” says Paul Kyle of the Chimney Swift Conservation Association (CSCA), “and the interiors of new chimneys are almost exclusively stainless steel, unsuited to the swifts’ needs.”

Individuals and groups who want to help reverse the decline of chimney swifts can try the following:

• Coexist. Chimney swifts begin nesting in late spring, and chicks fledge before fall. If you have an older chimney with a textured interior, consider sharing it with swifts. Susan and Todd Kaestner of Franklin, Tennessee, willingly surrender their chimneys to swifts each year from April to October. “The sounds emanating from the chimneys have become part of the charm of the house,” says Susan. If you go this route, be sure to close the flue so the birds can’t enter your home, and check with your insurance company, which may require chimneys to be capped. 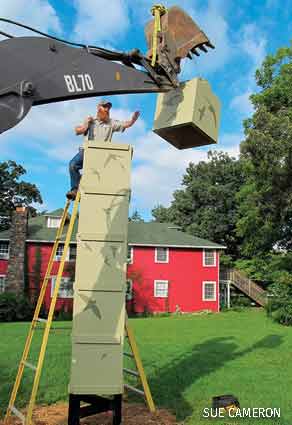 • Build. If you don’t want birds as housemates, you can still play a role by building a nest tower designed for swifts. Lin and Andrew Weber of Wimberley, Texas, built a tower in 2010, and “swifts moved in within weeks,” says Lin. Chicks have hatched in the tower nearly every year since. After learning that year-old chicks return to their birth sites, the Webers built additional towers to welcome the growing numbers. To find tower-building instructions, visit CSCA’s website: chimneyswifts.org.

• Monitor. Chimney swifts often congregate in large flocks, sometimes by the thousands, during their fall migration from southern Canada and the eastern United States to the upper Amazon Basin, stopping at known roost sites along the way—often old factory chimneys. You can help conduct counts at these sites to provide population data. In some places, watch parties called A Swift Night Out are held at dusk during August and September to view the avian funnel clouds plummet into chimneys. Go to CSCA’s site to learn more—and enjoy the spectacular show.