Eager for quick profits, poachers target some of North America's rarest and most iconic wild plants — and disrupt the ecosystems that depend on them. 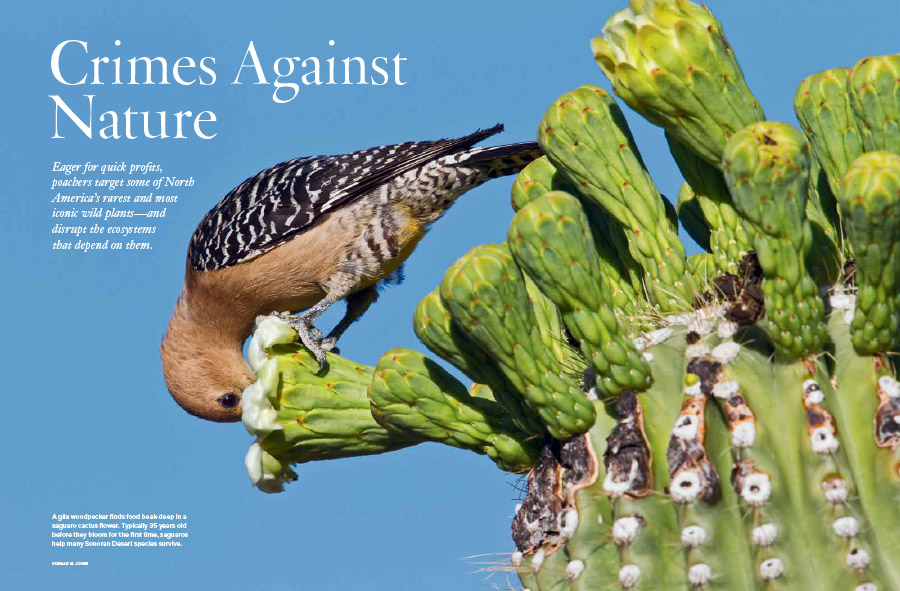 IT CAN TAKE DECADES for a saguaro cactus to grow large enough to be worth stealing, but just minutes for a team of thieves to rip one from its desert soil. Few of us might associate the crime of poaching with something as undramatic as shallow holes in the ground. But that’s what poachers are leaving behind from coast to coast—wherever lucrative markets turn native plants into profitable prey.

Every year, thousands of illegally trafficked plants are seized by officials in the United States, and according to the United Nations Conference on Trade and Development, the number of plants stolen from the wild to be sold as collectibles, decorations or medicine is growing worldwide. Cacti are a prime example: Globally, nearly a third of all cactus species are at risk of extinction—and almost half of those are threatened by black-market trade.

Florida lists 10 of its 16 native air plants as threatened or endangered, and poaching ranks as a major cause of population declines.

Pillars of the community

In Saguaro National Park near Tucson, Arizona, at the northern edge of the saguaro’s range, seedlings grow just 1 to 1.5 inches tall during their first eight years. Most don’t begin to sprout their distinctive upturned “arms” until they’re in their seventies or beyond. Some saguaros live for more than 150 years.

As they grow, saguaros become increasingly important to the ecosystems they inhabit. Physical geographer Taly Drezner of York University in Ontario has documented more than 100 animal species that depend on them, calling Carnegiea gigantea a “keystone species” of the Sonoran Desert. In the desert’s most arid spots, pack rats, rabbits, deer and bighorn sheep gnaw the flesh of young cacti to find precious moisture. Gila woodpeckers and gilded flickers excavate nest cavities in the columns of taller plants, raising their young in spine-fortified towers high above the bobcats, coyotes and other predators that prowl the desert floor. When these birds move on, small owls, finches and sparrows frequently move in. Red-tailed and Harris’s hawks hunt from cactus-top perches and assemble their stick nests among saguaros’ arms. Nectar from saguaros’ creamy blossoms nourishes two species of long-nosed bats. And in the dry, lean days of midsummer, ripe saguaro fruits help sustain a roster of desert birds, mammals, reptiles and insects.

But none of that matters to thieves, who care only that a medium-sized saguaro can earn them $100 per foot from landowners eager to decorate with this living symbol of the American West. The poachers even take their trucks and shovels into the national park, where removing just a single plant is a federal offense. “We know that cactus poaching occurs in the park,” says Chief Ranger Ray O’Neil, adding that in particularly vulnerable areas, such as road edges, poachers can have a negative impact on local cactus populations.

In 2007, a ranger caught a landscaper and his accomplice trying to load 17 park saguaros into a pickup truck, and eventually the lead poacher was sentenced to eight months in prison. But with limited resources and more than 91,000 acres to protect, rangers depend on a large measure of luck to make such arrests. So O’Neil and his colleagues came up with a novel way to discourage would-be cactus rustlers: They started injecting high-risk saguaros with microchips (yep, like the chip a vet uses to tag Fido or Fluffy), so that wherever the plants are found, they can be identified as federal property. Hundreds of saguaros have been chipped, and the innovative program has gotten a lot of press. O’Neil believes this extensive coverage has reached even potential thieves and deterred poaching in the park.

Thieves exploit another collector’s favorite—the Venus flytrap—in the Carolinas, the only place this insect-eating species exists in the wild.

The price of popularity

Saguaro-style dynamics play out across much of the country, with a bouquet of native plants in leading roles. Along the rugged coast of northern California, for example, the slow-growing succulent Dudleya farinosa helps stabilize soil on steep slopes and provides nectar for hummingbirds as well as butterflies and moths. In a single 2019 case, law enforcement agents seized some 3,700 Dudleya stolen from state parks and roadsides. Court documents indicate that the poachers meant to ship their booty to South Korea, where the plants—admired for their whorls of dusty blue-green leaves often dramatically tipped with red—would have been worth more than $600,000. Succulents are a trendy purchase here at home, too, with U.S. retail sales climbing by more than 60 percent since 2012.

In Florida, bromeliads known as air plants cling harmlessly to the bark of tall hosts such as cypress trees, creating microenvironments that shelter the eggs and larvae of small creatures such as mosquitoes and frogs. But along with a destructive invasive weevil, illegal collecting has led the state to designate 10 of its 16 native air plants as threatened or endangered. The popularity of these house and garden decorations makes them dangerously easy for thieves to turn into fast cash.

Demand from collectors also creates a hazard for one of the world’s most unusual plants: the carnivorous Venus flytrap. Dionaea muscipula “embodies the wild improbability of nature,” says University of Wisconsin botanist Don Waller. “It seems like a docile plant, then suddenly it’s a predator that imprisons and devours insect prey.” New studies show that scientists are only starting to understand the mechanisms flytraps use to satisfy their fleshy appetites.

Though cultivated specimens are abundant, Venus flytraps exist in the wild only within about a 75-mile radius of Wilmington, North Carolina. Waller says their survival is directly threatened by illegal collecting. In 2014, North Carolina made poaching the plants a felony, and in 2019 a man arrested with more than 200 flytraps in his possession faced 73 felony counts. He made a plea deal that included serving two months in the Brunswick County jail and replanting all the Venus flytraps he stole. But even with increased anti-poaching enforcement efforts, wild numbers continue to shrink, and Waller leads a group of researchers petitioning the U.S. Fish and Wildlife Service to list flytraps as endangered. The species “poses a wonderfully intricate set of questions about how its unusual adaptations arose,” he says. “Losing the wild populations of the Venus flytrap would completely preclude our ability to study its natural ecology.”

Black cohosh flower stalks may rise 8 feet above the forest floor, showing harvesters where to find the roots humans have used for centuries as medicine. To an Appalachian azure butterfly, though, this plant is a nursery for her offspring. She’ll lay her eggs on the stalk, and when the larvae hatch, they’ll depend on the buds, blooms and leaves for food. The legal collecting period for American ginseng (below) allows time for wood thrushes to feed on the plant’s nutrient-rich berries. But thieves often dig the roots before the berries ripen, depriving thrushes of food that helps fuel long flights to Central American wintering grounds.

Breaking into the drug market

Inland from flytrap habitat, plant thieves train their sights on different quarry, exploiting valuable medicinal herbs growing in the mountain forests of Appalachia and in woodlands from the Great Lakes to the Ozarks. One such plant, black cohosh, is a slow-growing perennial that azure butterfly mothers rely on to feed and shelter their young. Human females also seek out the plant as the basis of hormone-free treatments for menopausal discomforts. Millions of dollars’ worth of its roots are traded annually. Nearly the entire U.S. harvest comes from wild sources, and in some years thieves have dug as much or more black cohosh from national forest lands than have honest harvesters holding U.S. Forest Service collecting permits.

Poachers also compete with legitimate harvesters for a share of the lucrative market for wild ginseng (below), much of it exported to Asia where it’s been used for centuries in traditional Chinese medicine to boost energy, enhance strength, fight disease and promote longevity. Though scientists have found little difference between the active chemical compounds in wild versus cultivated ginseng, wild roots can sell for hundreds of dollars per pound—about 10 times the price paid for roots of farm-raised plants. 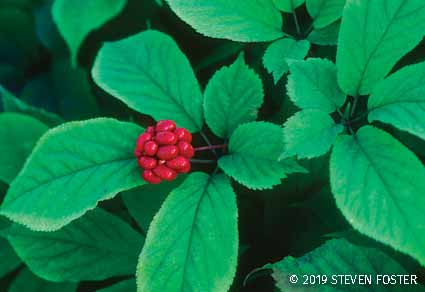 People are not the only animals attracted to the plants. Wood thrushes mate and raise their young in the same forests where wild ginseng grows. In late summer, the plants’ fruits ripen into bright-red beacons just as the birds need to fatten up for long flights to Central America. Smithsonian Institution biologist Amy Hruska found that the berries and the hungry birds are a crucial combination. “Thrushes eat the ripe fruits whole, and in about 15 minutes they regurgitate the intact seeds,” she explains. “We know wood thrushes are very important for the survival of ginseng, likely helping the plants colonize new areas and escape threats.”

But human exploitation may pose a threat the plant can’t escape. University of North Carolina–Asheville biologist Jennifer Ward believes that current harvest levels (44,000 to more than 90,000 pounds annually in legal sales alone) may not be sustainable. “Population models predict that Panax quinquefolius could be extinct in the wild within the next century,” she says. The disappearance of wild ginseng would be a blow to people who value the roots’ healing powers. It could also further harm wood thrushes, which have suffered a 60 percent population decline since the mid-1960s.

Waller points out that our admiration for wild plants “turns dark” when demand spurs illegal harvests that damage populations. “It’s our job to figure out how not to kill the things we love,” he says, “and to use our appreciation to protect them instead.

Learn how the National Wildlife Federation is working to protect endangered species at nwf.org/ESA.

Writer Lynne Warren lives in Maryland, where more than 300 native plant species are state-listed as threatened or endangered.