Lifelines of the Planet

From Borneo to the Andes and pole to pole, Earth’s plants and animals cling to dwindling habitat and edge closer to extinction—a global biodiversity crisis crying out for action. 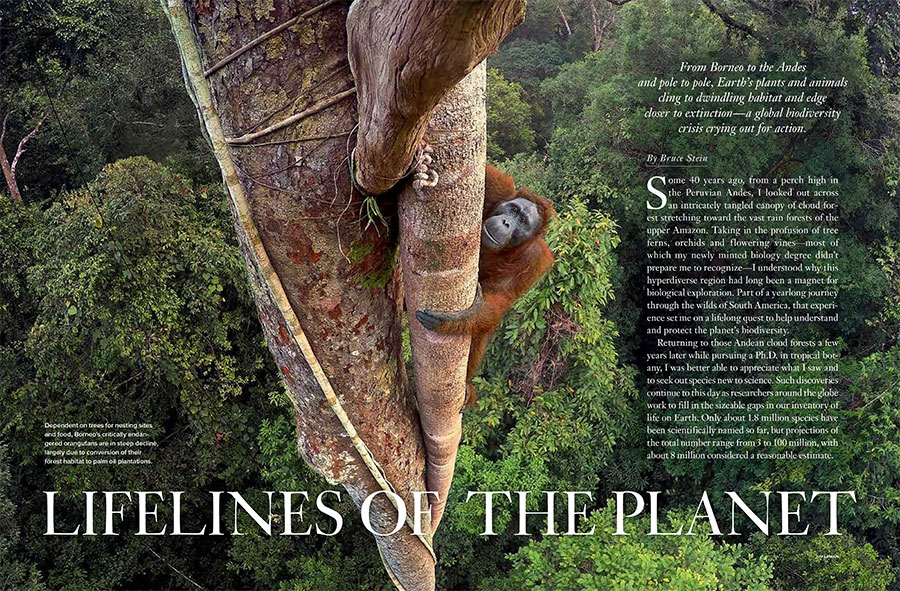 Dependent on trees for nesting sites and food, Borneo’s critically endangered orangutans are in steep decline, largely due to conversion of their forest habitat to palm oil plantations. (Photo by Tim Laman)

SOME 40 YEARS AGO, from a perch high in the Peruvian Andes, I looked out across an intricately tangled canopy of cloud forest stretching toward the vast rain forests of the upper Amazon. Taking in the profusion of tree ferns, orchids and flowering vines—most of which my newly minted biology degree didn’t prepare me to recognize—I understood why this hyperdiverse region had long been a magnet for biological exploration. Part of a yearlong journey through the wilds of South America, that experience set me on a lifelong quest to help understand and protect the planet’s biodiversity.

Returning to those Andean cloud forests a few years later while pursuing a Ph.D. in tropical botany, I was better able to appreciate what I saw and to seek out species new to science. Such discoveries continue to this day as researchers around the globe work to fill in the sizeable gaps in our inventory of life on Earth. Only about 1.8 million species have been scientifically named so far, but projections of the total number range from 3 to 100 million, with about 8 million considered a reasonable estimate.

Unfortunately, we know that many of these plants and animals are in decline, with increasing numbers in danger of disappearing altogether. This global biodiversity crisis is starkly reflected in the International Union for Conservation of Nature’s (IUCN) Red List of Threatened Species, an ongoing assessment by a worldwide network of scientists. The Red List now shows more than 31,000 species threatened with extinction globally and records nearly 900 that already have vanished. Worldwide, an extraordinary 63 percent of all cycads, a primitive group of seed plants, are at risk, putting them at the top of the list of threatened life-forms, while 14 percent of bird species face possible extinction. By extrapolating Red List assessments to the full array of species—known and unknown—a recent United Nations report estimates that a staggering 1 million species worldwide may be threatened with extinction in the coming decades.

Global patterns of diversity and threat vary substantially. As a general rule, species diversity increases from the poles to the equator, an observation first made in the early 1800s by the German naturalist and explorer Alexander von Humboldt. It is this exuberance of life that makes tropical forests so important biologically—just as their rich genetic and ecological variation make them vital for humanity.

Many tropical plants and animals evolved to be highly specialized and interdependent. One example: The sword-billed hummingbird is a cloud-forest bird that relies on long-tubed passionflowers for nectar and, in turn, pollinates the flowers. Such specializations make species highly vulnerable to ecosystem disruptions—yet across the globe, the human footprint has hit tropical regions particularly hard. 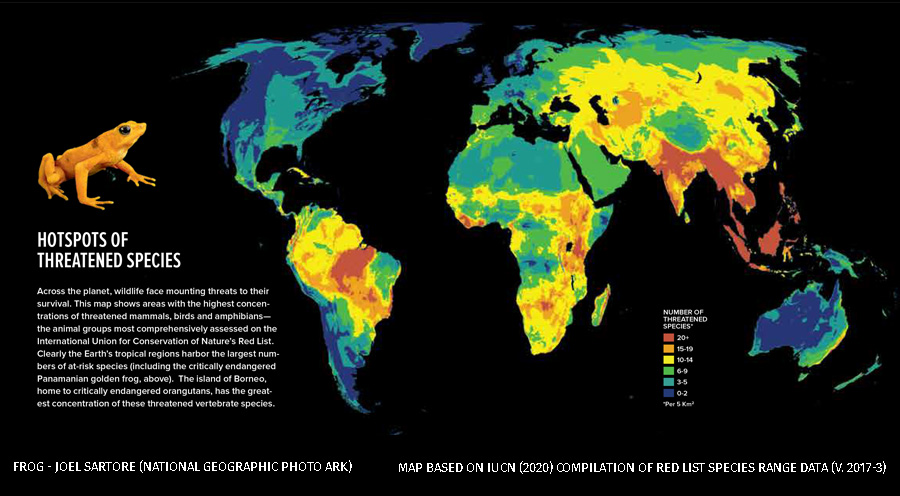 Across the planet, wildlife face mounting threats to their survival. This map shows areas with the highest concentrations of threatened mammals, birds and amphibians—the animal groups most comprehensively assessed on the International Union for Conservation of Nature’s Red List. Clearly the Earth’s tropical regions harbor the largest numbers of at-risk species (including the critically endangered Panamanian golden frog, above). The island of Borneo, home to critically endangered orangutans, has the greatest concentration of these threatened vertebrate species.

Human threats range from habitat destruction and introduction of invasive species to bushmeat hunting and wildlife trafficking. Our appetite for cheap palm oil for cookies and cosmetics is destroying the dwindling forests that sustain orangutans in Borneo and Sumatra. Indeed, the massive conversion of nature for human use underlies the global biodiversity crisis. A recent paper in the Proceedings of the National Academy of Sciences found that domesticated livestock such as cattle and pigs now make up 60 percent of all mammalian weight, or biomass, on Earth, with humans comprising 36 percent. Wild mammals, from massive whales to tiny shrews, account for a minuscule 4 percent!

Though not so apparent on the map above, the United States is no slacker in terms of biodiversity—or human impacts. It has Earth’s greatest diversity of salamanders and freshwater mussels and is second only to China in the variety of conifers such as pines and firs. Hawai‘i’s unique plants and animals, which evolved in oceanic isolation, rival those of the Galápagos Islands—yet many are severely threatened.

Two decades ago, I had the privilege of publishing Precious Heritage, a book on the state of U.S. biodiversity that celebrated the nation’s species and offered a vision for their conservation. When we wrote that book, the threat of climate change still seemed distant. Not long after, the fingerprints of global warming on our plants and animals became distressingly clear. Today, we see that climate change is not only broadly impacting our ecosystems but undermining many of our traditional, place-based conservation approaches, especially with species on the move in response to climatic shifts.

Despite the stream of alarming reports about climate change and its effects, we know that investing in well-designed and climate-smart conservation can help sustain and recover wildlife species. Indeed, ensuring that wild plants and animals not only survive but thrive in the face of these growing challenges is part of the commitment I made so long ago while perched high in the Andean cloud forest. 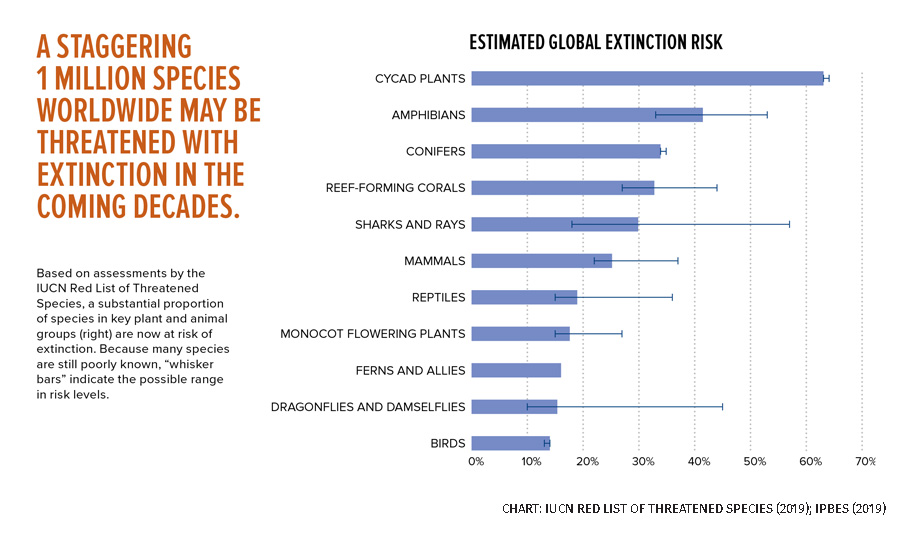