A wealth of wildlife relies on tree snags, known as “habitat trees.” 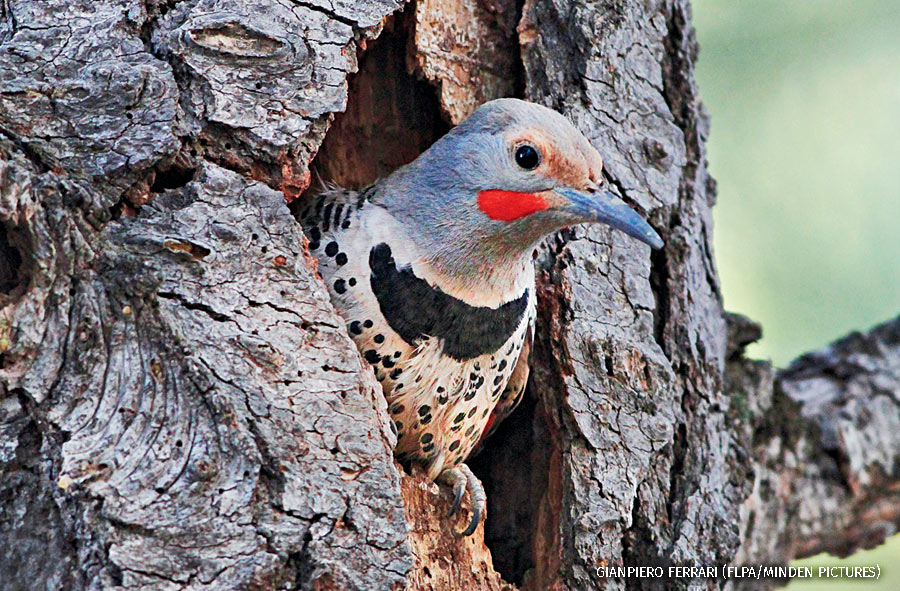 Woodpeckers (such as the northern flicker, above) are the first birds to carve cavities in snags. Raccoons (below) also shelter and rear young in hollow trees.

LOOKING FOR A SIMPLE, low-cost way to boost wildlife habitat? Leaving a dead tree or downed log in your yard will do the trick. Nationwide, about 1,000 species of birds, mammals, amphibians and reptiles depend on these “snags” at some point in their life cycle.

Until a few decades ago, snags—today better known as “habitat trees”—were routinely removed both from backyards and forests. Now we know better, says Ken Bevis, stewardship wildlife biologist for the Washington State Department of Natural Resources. “A tree provides excellent habitat for many, many years after it dies,” he says. 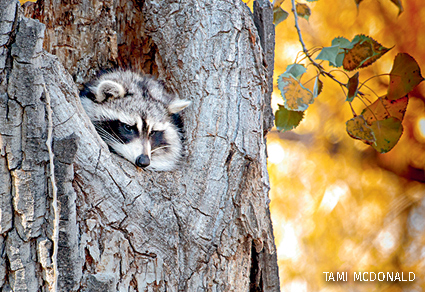 Woodpeckers are the first birds to take advantage of snags, Bevis says, usually beginning to excavate cavities five to seven years after the tree dies. Swallows, bluebirds, wrens, small owls, kestrels and wood ducks are among the birds that nest in the same cavities after the woodpeckers depart. Porcupines, squirrels, martens and other mammals also shelter in hollow trees. In winter, brown creepers, small nuthatchlike birds, and some bat species roost behind the loose bark to keep warm. Hawks and owls perch on the tops of snags when searching for prey.

If you have space, experts recommend three habitat trees per acre, but even one will provide benefits. “The smallest of snags is going to be valuable,” says Ashley Hoppers, a University of Georgia extension agent. “But the larger it is, the better.”

From hazard to habitat

As for the risks of keeping snags, avoid having dead wood resting against your home. Any large branch or tree that may fall on your house or your neighbor’s should be cut down or trimmed. Bevis suggests removing the crown, or as much as one-half or even two-thirds of a dead tree, which he calls transforming it from hazard to habitat. “Broken tops are great,” he says. “An arborist can make it look like the snag broke off naturally.”

Downed logs also provide valuable habitat. As the logs decay, Hoppers says, they replenish soil nutrients, attract insect food for animals and act as “nurse logs” for new tree seedlings to sprout. A wide variety of wildlife—from chipmunks to scarlet king snakes to several salamander species—will set up housekeeping in the logs, bringing an even greater abundance of wildlife to your at-home habitat.

Doreen Cubie is a frequent contributor who last wrote about how to help wildlife stay wild in your yard.