In 1972, passage of the Clean Water Act launched a new era of hope for American waters 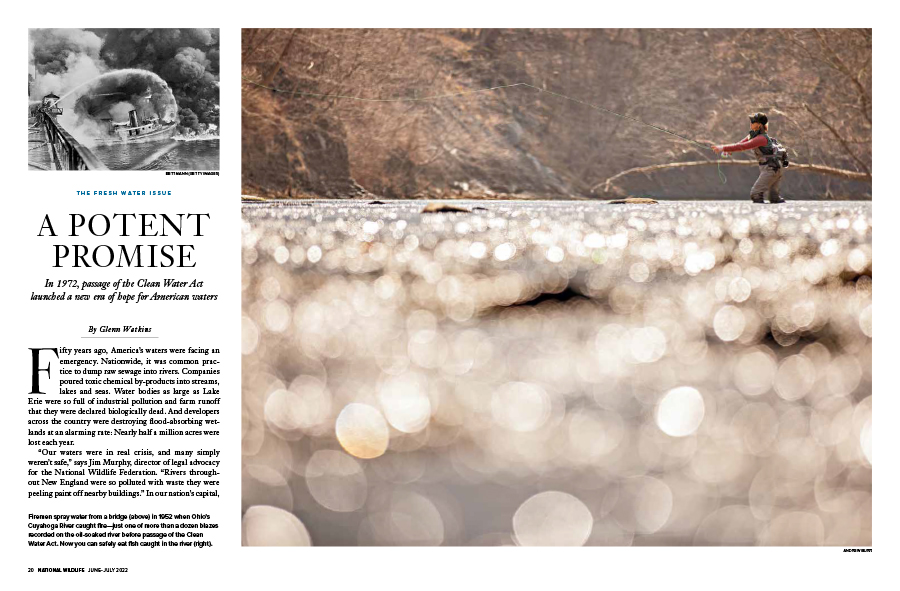 Firemen spray water from a bridge (below) in 1952 when Ohio’s Cuyahoga River caught fire—just one of more than a dozen blazes recorded on the oil-soaked river before passage of the Clean Water Act. Now you can safely eat fish caught in the river (above, photo by Andrew Burr).

FIFTY YEARS AGO, AMERICA'S WATERS were facing an emergency. Nationwide, it was common practice to dump raw sewage into rivers. Companies poured toxic chemical by-products into streams, lakes and seas. Water bodies as large as Lake Erie were so full of industrial pollution and farm runoff that they were declared biologically dead. And developers across the country were destroying flood-absorbing wetlands at an alarming rate: Nearly half a million acres were lost each year. 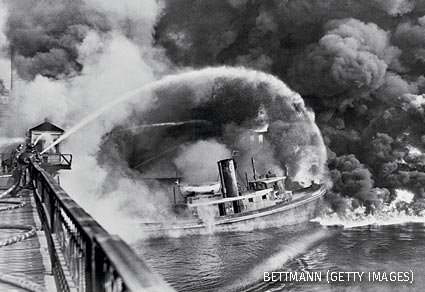 “Our waters were in real crisis, and many simply weren’t safe,” says Jim Murphy, director of legal advocacy for the National Wildlife Federation. “Rivers throughout New England were so polluted with waste they were peeling paint off nearby buildings.” In our nation’s capital, millions of gallons of waste and sewage flushed into the Potomac River daily, causing smelly algae to smother the river each summer. In Ohio, the Cuyahoga River was so saturated with oil and debris that it caught fire more than a dozen times—even before the infamous inferno of 1969, when the flames reached more than five stories high.

In a powerful bipartisan move to confront this crisis, Republicans and Democrats came together in 1972 to pass the Clean Water Act. The law immediately made it illegal to intentionally dump pollutants from any “point source”—such as a factory or city sewer—into our nation’s waters without a federal permit that placed limits on the pollution. It also required developers or agricultural interests to apply for permits before converting wetlands to dry land.

For water bodies that did not meet federal water-quality standards (strengthened by the act), the legislation required local governments to develop cleanup plans with pollution-reduction goals to bring the waters back to health. And it provided funding to help communities restore damaged wetlands and—perhaps most critically—helped communities nationwide upgrade wastewater treatment plants. 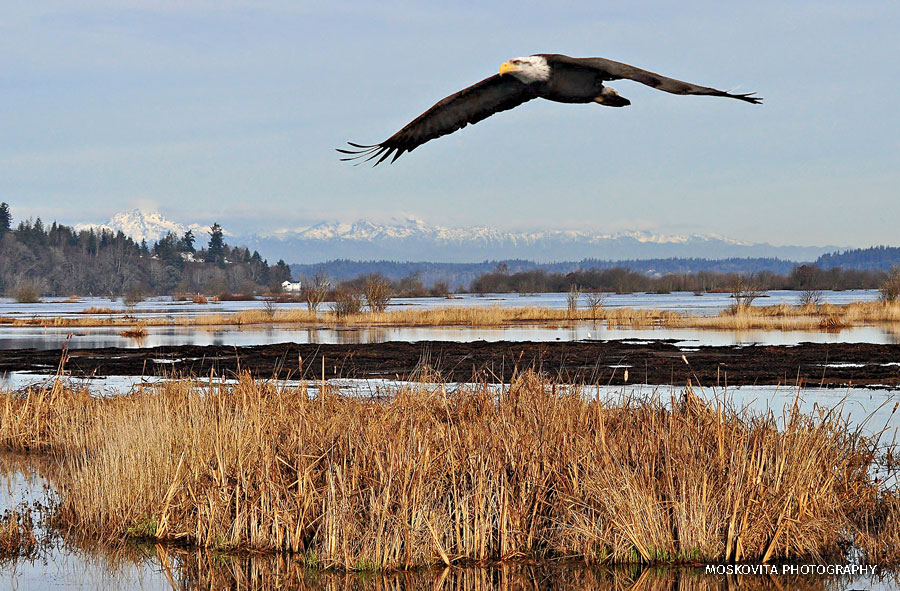 For the past 50 years, this landmark legislation has done much to bring our waters back to life—turning rivers, bays, lakes and streams that were once too polluted for many types of fish back into productive, healthy waterways. “The Clean Water Act is primarily responsible for the fact that we can enjoy boating and fishing in most waters of the United States without having to worry about our health,” says Murphy. Each year, the law keeps 700 billion pounds of pollutants out of our waters, the rate of wetland loss has slowed and the number of water bodies that are safe for fishing and swimming has doubled since the law’s passage. Today, you can even safely eat fish caught in the Cuyahoga River.

Wildlife have benefited as well. As water quality improved, fish species such as largemouth bass, walleye and bluegill rebounded in damaged systems across the country. As fish recovered, so did many other species that rely on fish and healthy aquatic habitats, from waterfowl to river otters.

Despite the law’s success, the Clean Water Act has been under attack in recent years. The Trump administration, for example, sought to restrict states’ and Tribes’ ability under the law to review—and potentially block—federal permits for dams, mines, pipelines and other projects that could harm water quality. 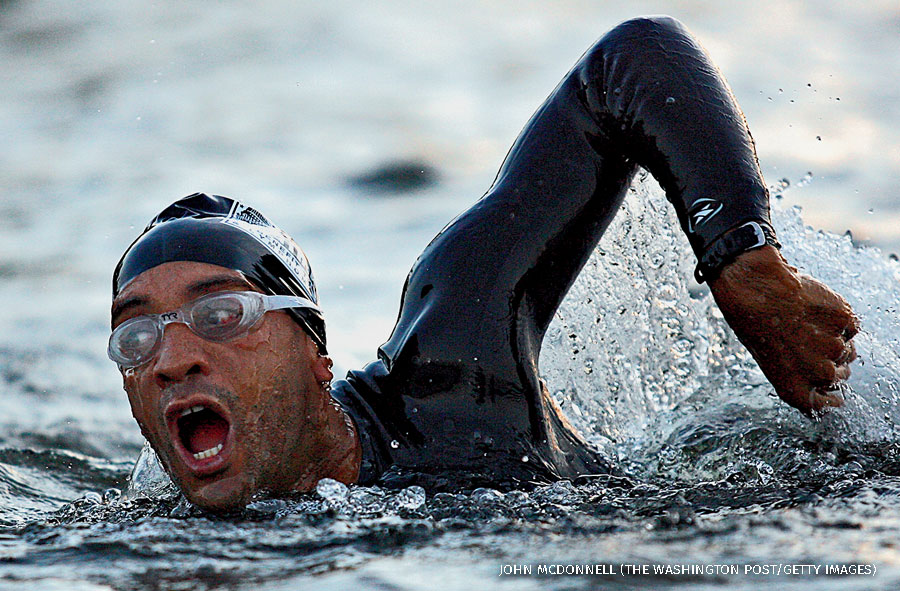 In 2008, former Washington, D.C., Mayor Adrian Fenty swam a mile in the once algae-clogged Potomac River during the Nation’s Triathlon. In recent years, politics have jeopardized clean-water protections both for wetlands and streams that feed rivers such as the Potomac.

An ongoing controversy centers on the definition of “waters” that are protected by the law (see Sustaining Fresh Waters). Although major waters such as the Great Lakes, Mississippi River and Puget Sound have unequivocally been provided federal Clean Water Act protections, coverage for wetlands and smaller headwaters and streams has become politicized.

In 2020, the Trump administration redefined waters protected by the law, removing longstanding safeguards for more than half our nation’s wetlands and millions of miles of streams and leaving them vulnerable to development and pollution. Though that rule was rescinded, the act’s ambiguity leaves protection uncertain for many small streams and wetlands vital for both people and wildlife. Anything harmful that happens in these upstream waters affects drinking water downstream and can increase the risk of floods and threaten wildlife as well as our quality of life.

“It’s like a capillary system,” explains Jan Goldman-Carter, former NWF counsel and director of wetlands and water resources. “Headwaters and seasonal streams connect to larger streams that flow into our estuaries. People, fish, wildlife and water quality downstream are completely dependent on the health and integrity of the little capillaries upstream.”

Seasonal streams and streams that flow only after a rainfall or snowmelt enhance downstream water quality by absorbing floods and cleaning water. These streams also serve as refuges or spawning grounds for many species of fish while supplying drinking water to millions of Americans. Wetlands also absorb floodwaters—as much as 1 million gallons of water per acre—providing natural protection that is made even more crucial in the face of climate change and especially important to vulnerable communities of color that have historically been pushed to more flood-prone areas.

October 2022 marks the 50th anniversary of the Clean Water Act. On this historic milestone, we have an opportunity to continue progress made during the past half century and strengthen the act’s protections for all waters, from the largest lakes and mightiest rivers downstream to the smallest streams at the peaks of our nation’s watersheds.

Glenn Watkins is a water resources policy specialist for the National Wildlife Federation, which has championed clean waters since its founding in 1936. See Our Work: Clean Water Act.