Bracing for the Next Storm 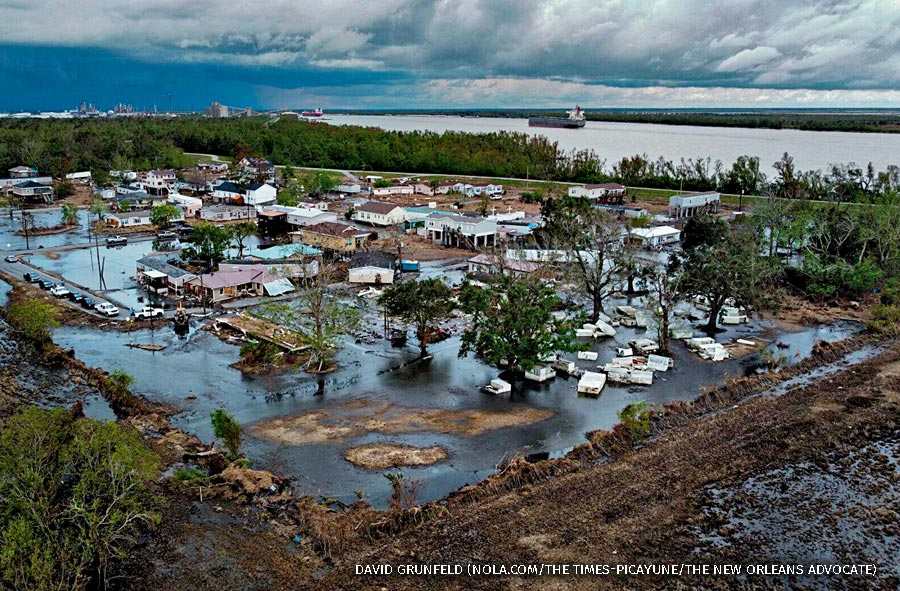 Weeks after Hurricane Ida, flooding remained in Ironton (above), leaving a cemetery with exposed caskets and remains. Kornell Davis cleans up in Saint Paul Missionary Baptist Church (below).

The flooding came as no surprise to the town’s roughly 250 residents. Decades of rising seas and sinking land have led to widespread erosion all along the Gulf of Mexico. Without wetlands to serve as “speed bumps,” storm waters quickly moved 20 miles inland from the Gulf to Ironton, which—like many towns in south Louisiana—lacks reinforced federal levees that protect nearby New Orleans.

A few days after the storm, the Rev. Haywood Johnson drove his pickup into town. Like most residents, Johnson’s family traces its roots back to the formerly enslaved people who founded the community more than 150 years ago. Inside Saint Paul Missionary Baptist Church, where he has preached for 22 years, Johnson found 8 feet of standing water. “This storm was an act of God,” he said. “But the neglect was done by man. We’ve been neglected for a long time.” 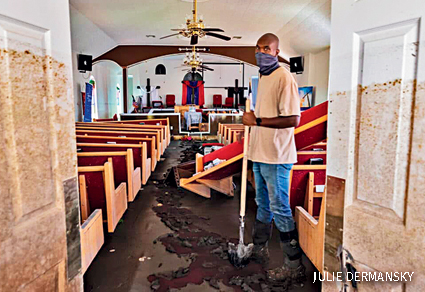 Ironton did not have piped running water until the 1980s. It took another 10 years to get a sewer system allowing residents to install flush toilets. During the following decade, other basics finally arrived: gas lines, paved roads and streetlights.

After Ida, NWF also supported Ironton’s longstanding requests for state funds to increase storm resilience, and this year, it finally received $3 million for residents to elevate structures. Johnson plans to raise his church by 10 feet and then get back to normal life. “I’m not an activist or a politician,” he says. “I’m a preacher.”

That’s as it ought to be, says Matthews: “Ironton reminds us that residents should be able to live life without constantly bracing for the devastation that can feel inevitable because of land loss along the Gulf Coast.”

Katy Reckdahl is based in New Orleans.