Honoring some notable Black U.S. environmentalists past and present 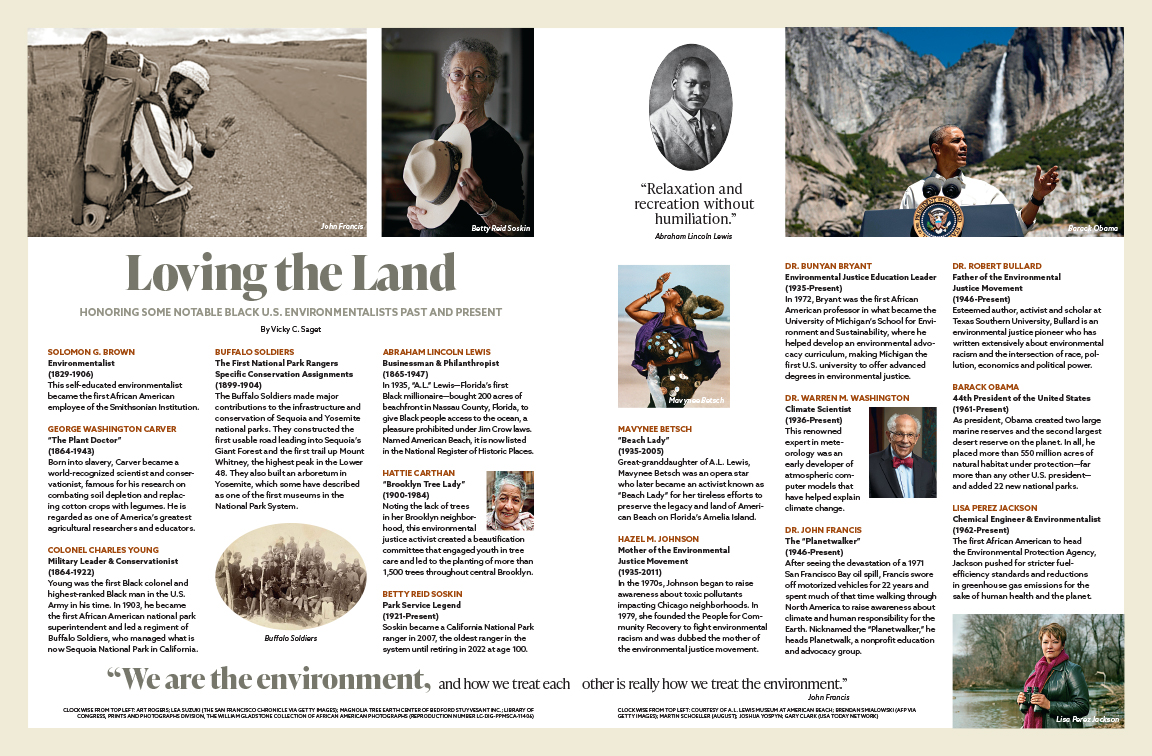 “The Plant Doctor”
(1864-1943)
Born into slavery, Carver became a world-recognized scientist and conservationist, famous for his research on combating soil depletion and replacing cotton crops with legumes. He is regarded as one of America’s greatest agricultural researchers and educators.

Military Leader & Conservationist
(1864-1922)
Young was the first Black colonel and highest-ranked Black man in the U.S. Army in his time. In 1903, he became the first African American national park superintendent and led a regiment of Buffalo Soldiers, who managed what is now Sequoia National Park in California.

The First National Park Rangers
Specific Conservation Assignments (1899-1904)
The Buffalo Soldiers made major contributions to the infrastructure and conservation of Sequoia and Yosemite national parks. They constructed the first usable road leading into Sequoia’s Giant Forest and the first trail up Mount Whitney, the highest peak in the Lower 48. They also built an arboretum in Yosemite, which some have described as one of the first museums in the National Park System.

Businessman & Philanthropist
(1865-1947)
In 1935, “A.L.” Lewis—Florida’s first Black millionaire—bought 200 acres of beachfront in Nassau County, Florida, to give Black people access to the ocean, a pleasure prohibited under Jim Crow laws. Named American Beach, it is now listed in the National Register of Historic Places.

“Brooklyn Tree Lady”
(1900-1984)
Noting the lack of trees in her Brooklyn neighborhood, this environmental justice activist created a beautification committee that engaged youth in tree care and led to the planting of more than 1,500 trees throughout central Brooklyn.

Park Service Legend
(1921-Present)
Soskin became a California National Park ranger in 2007, the oldest ranger in the system until retiring in 2022 at age 100.

“Beach Lady”
(1935-2005)
Great-granddaughter of A.L. Lewis, Mavynee Betsch was an opera star who later became an activist known as “Beach Lady” for her tireless efforts to preserve the legacy and land of American Beach on Florida’s Amelia Island.

Environmental Justice Education Leader
(1935-Present)
In 1972, Bryant was the first African American professor in what became the University of Michigan’s School for Environment and Sustainability, where he helped develop an environmental advocacy curriculum, making Michigan the first U.S. university to offer advanced degrees in environmental justice.

Climate Scientist
(1936-Present)
This renowned expert in meteorology was an early developer of atmospheric computer models that have helped explain climate change.

The “Planetwalker”
(1946-Present)
After seeing the devastation of a 1971 San Francisco Bay oil spill, Francis swore off motorized vehicles for 22 years and spent much of that time walking through North America to raise awareness about climate and human responsibility for the Earth. Nicknamed the “Planetwalker,” he heads Planetwalk, a nonprofit education and advocacy group. In 2022, Francis published "Human Kindness: True Stories of Compassion and Generosity that Changed the World."

Father of the Environmental Justice Movement
(1946-Present)
Esteemed author, activist and scholar at Texas Southern University, Bullard is an environmental justice pioneer who has written extensively about environmental racism and the intersection of race, pollution, economics and political power.

44th President of the United States
(1961-Present)
As president, Obama created two large marine reserves and the second largest desert reserve on the planet. In all, he placed more than 550 million acres of natural habitat under protection—far more than any other U.S. president—and added more than 25 sites to the park system.

Chemical Engineer & Environmentalist
(1962-Present)
The first African American to head the Environmental Protection Agency, Jackson pushed for stricter fuel-efficiency standards and reductions in greenhouse gas emissions for the sake of human health and the planet.