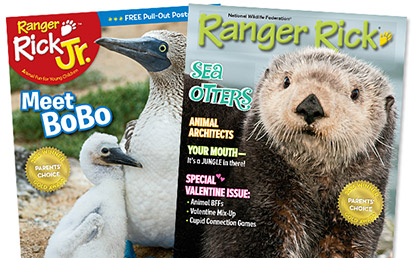 National Wildlife Federation (NWF), America’s largest wildlife conservation and education organization, is pleased to announce that its Ranger Rick and Ranger Rick Jr. magazines, have both won the 2015 Parents’ Choice Award for editorial and design excellence by the Parents’ Choice Foundation.

"National Wildlife Federation has a proud history of entertaining and educating children about the wonders of animals and nature," said Mary Dalheim, editorial director of Children's Publications for National Wildlife Federation. "From our beloved children’s magazines like Ranger Rick to our apps, our products make reading and learning about wildlife fun for kids of all ages. We are thrilled to be recognized by the Parents' Choice Foundation again for our achievements in educational publishing."

"NWF’s publications are teaching more than 3 million young readers to love wildlife, to love and explore the outdoors on their own, and are setting the groundwork for building the next generation of conservationists," said Hervey Evans, executive publisher at National Wildlife Federation.

Rave reviews from Parents’ Choice Foundation:
•   This is the 9th gold medal for Ranger Rick magazine.  In its review, Parents’ Choice reports, "This highly engaging magazine offers profiles and fascinating articles about all manner of the world's creatures, natural habitats, and conservation and rescue efforts. Past stories include the efforts of two 13-year-olds to help save the endangered nautilus, the "zones of life" that make up the world's oceans, and the life and times of lemurs, tree frogs, rescued baby orangutans, and two very odd birds, indeed: the shoebill and the cassowary. The magazine's easy approachability is underscored by animal- and insect-themed jokes, observations and photos submitted by readers. A wealth of vivid photography illustrates each issue."

•   Ranger Rick Jr. (formerly Big Backyard) launched in December/January 2013, and has already been honored with two Parents’ Choice gold medals since the launch. The reviewer praised the magazine in its review, "For new readers who love animals and the outdoors, Ranger Rick Jr. offers a mix of animal-themed stories, nonfiction, and literacy activities that are age-appropriate and packed with appealing visuals. Each issue begins with a feature called "That's Wild," which presents photos of various animals, each captioned with an entertaining or unexpected fact. A cover story for each issue reviews a single animal (or class of animals, such as vertebrates) in more substantive detail, using accessible language and sentence structure for emerging readers. Each issue also contains one or two puzzles and games, which vary from month to month, and might include seek-and-find pictures, matching games, categorization, or instructions for drawing the animal of the month. Fiction features include a monthly story featuring Bonnie and Chester, which replaces a few words in each sentence with pictures to help children "read" along, and a closing story relating the humorous adventures of Ricky and his animal friends….For young readers who just want good, interesting, and varied reading about animals (both the wild kind and the fictional anthropomorphic kind), Ranger Rick Jr. will provide plenty of wonderful fun at a very affordable price."