"If we all work together, we can ensure that every American child has a chance to experience amazing monarchs in their backyards." 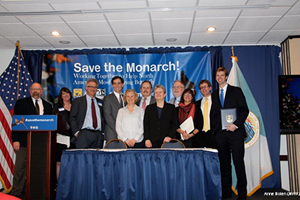 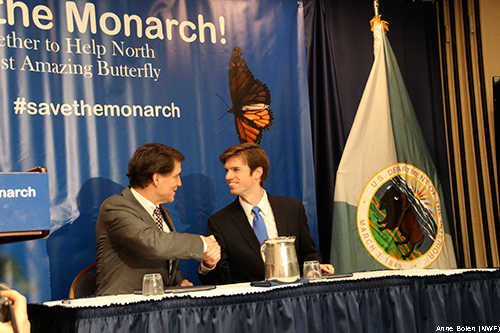 While monarchs are found across the United States — as recently as 1996 numbering some 1 billion — their numbers have declined by approximately 90 percent in recent years, a result of numerous threats, particularly loss of habitat due to agricultural practices, development and cropland conversion. Degradation of wintering habitat in Mexico and California has also had a negative impact on the species.

To directly tackle these challenges, the new cooperative effort will build a network of diverse conservation partners and stakeholders to protect and restore important monarch habitat, while also reaching out to Americans of all ages who can play a central role.

“We can save the monarch butterfly in North America, but only if we act quickly and together,” said Ashe. “And that is why we are excited to be working with the National Wildlife Federation and National Fish and Wildlife Foundation to engage Americans everywhere, from schools and community groups to corporations and governments, in protecting and restoring habitat. Together we can create oases for monarchs in communities across the country.”

“Known for its beautiful orange color, fascinating life cycle and remarkable annual migration, the monarch butterfly is the most iconic butterfly in North America,” Klobuchar said. “With the butterfly rapidly disappearing, I am pleased to see the Fish and Wildlife Service taking positive steps to reverse its decline. We must build on this momentum, and I will continue to call on the public and private sectors to join together in the effort to protect the monarch butterfly.”

The memorandum of understanding between the National Wildlife Federation and the U.S. Fish and Wildlife Service will serve as a catalyst for national collaboration on monarch conservation, particularly in planting native milkweed and nectar plants, the primary food sources in breeding and migration habitats for the butterfly.

“If we all work together — individuals, communities, farmers, land managers, and local, state, and federal agencies — we can ensure that every American child has a chance to experience amazing monarchs in their backyards,” said O’Mara. “By taking action today and addressing the growing threats that are affecting so much of America’s treasured wildlife — habitat loss, pesticide overuse and climate change — we will preserve monarchs and America’s rich wildlife legacy. The National Wildlife Federation and our state affiliates are proud to stand with the Fish and Wildlife Service, the National Fish and Wildlife Foundation, and other key partners on the front lines of action.”

The new NFWF Monarch Conservation Fund announced today was kick-started by an injection of $1.2 million from the Service that will be matched by other private and public donors. The fund will provide the first dedicated source of funding for projects working to conserve monarchs.

“The National Fish and Wildlife Foundation has a long track record of partnering with the U.S. Fish and Wildlife Service to develop successful private landowner-focused conservation grant programs,” said NFWF Director and CEO Jeff Trandahl. “We look forward to working closely with the Service as we establish the Monarch Butterfly Conservation Fund, which will serve as a key component of the effort to revitalize monarch butterfly populations and the important native plant species on which they depend.”

From California to the Corn Belt, the Service will also fund numerous conservation projects totaling $2 million this year to restore and enhance more than 200,000 acres of habitat for monarchs while also supporting over 750 schoolyard habitats and pollinator gardens. Many of the projects will focus on the I-35 corridor from Texas to Minnesota, areas that provide important spring and summer breeding habitats in the eastern population’s central flyway.

“These projects will not only help us leverage expertise and resources for engaging critical partners on restoring the monarch,” said Ashe. “We will also reach out to millions of Americans on both the challenge involved and how they can help. Together, we will make sure that the monarch continues to be a welcome sight across America.”

The monarch is perhaps the best-known butterfly species in the United States. Every year they undertake one of the world’s most remarkable migrations, traveling thousands of miles over many generations from Mexico, across the United States, to Canada.

The monarch’s exclusive larval host plant and a critical food source is native milkweed, which has been eradicated or severely degraded in many areas across the United States in recent years. The accelerated conversion of the continent’s native short and tallgrass prairie habitat to crop production has also had an adverse impact on the monarch.

Spectacular as it is, protecting the monarch is not just about saving one species. The monarch serves as an indicator of the health of pollinators and the American landscape. Monarch declines are symptomatic of environmental problems that pose risks to our food supply, the spectacular natural places that help define our national identity, and our own health. Conserving and connecting habitat for monarchs will benefit other plants, animals and important insect and avian pollinators.

NWF recognizes the increased need for native milkweed to restore disappearing monarch habitat across large landscapes, and suburban and urban gardens. It acknowledges the role that many NGOs, agencies and the seed and nursery industries must play. To that end, NWF is committed to supporting joint efforts with the Xerces Society, Monarch Watch, the Monarch Joint Venture and seed associations regarding scale and quality of seed required.

In addition, NWF is working to bring attention to the decline of America’s remaining grassland habitats and to address the causes of the decline of this habitat that is so critical to monarchs and many other species. Working with federal and state agencies and the agricultural community, NWF hopes to promote restoration and enhancement of grasslands habitats on the agricultural landscape. Learn more about NWF’s monarch protection efforts at NWF.org/Monarchs.

The Service’s public engagement effort includes a monarch website (www.fws.gov/savethemonarch) with details and photos on the monarch’s plight, information on how Americans can get involved and direct outreach to schools and communities. Since agriculture also plays a key role in the monarch’s survival, our partnership efforts will engage farmers and landowners on management practices that will protect and restore habitat.

NWF's efforts in protecting the monarch butterfly
Memorandum of Understanding

Learn more about the cooperative agreement