NWF honors individuals and organizations who volunteer their time, commitment and service to the conservation movement 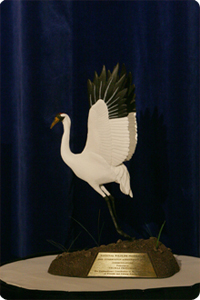 The National Wildlife Federation (NWF), America’s largest wildlife conservation and education organization, recognized six honorees for their outstanding contributions to the conservation field at NWF’s annual Conservation Achievement Awards on May 14th, 2015, at the Ronald Reagan Building, in Washington D.C.

"This year’s award winners are rich in inspiration and leadership," said Collin O’Mara, president and CEO of National Wildlife Federation. "We are proud to recognize them and the contributions they have made to the conservation movement in America."

William McDonough, FAIA, Int. FRIBA, selected as the recipient of the J.N. “Ding” Darling Conservation Award for Lifetime Achievement, is a globally recognized designer, thought leader, sustainable growth pioneer, and the pre-eminent voice for ecologically intelligent design and what he calls “waging peace through commerce.” For 40 years he has defined the principles of the sustainability movement, creating its seminal buildings, products, texts and enterprises and preparing the ground for its widespread growth. For more information about William McDonough, please go to: http://www.nwf.org/Who-We-Are/Conservation-Awards/Honorees-Text.aspx.

Jim Posewitz, awarded Conservationist of the Year, is a sportsmen leader held in the highest regard. A gifted historian, Mr. Posewitz tirelessly advocates on behalf of sportsmen for the importance of preserving and protecting wildlife and wild places. He has written four books on hunter ethics, including Beyond Fair Chase: The Ethic and Tradition of Hunting (Falcon Press, 1994), Inherit the Hunt: A Journey into the Heart of American Hunting (Falcon Press, 1999), Rife in Hand: How Wild America was Save (Riverbend Publishing, 2004) and Take a Bullet for Conservation (self-published, 2011). Most recently, Mr. Posewitz has worked closely with National Wildlife Federation championing the restoration of bison in Montana.

The NYC iSchool, selected for the Education Award, opened in 2008 with 100 ninth grade students in a 100-plus-year-old school building in the SoHo area of Manhattan. The iSchool shares its space with another high school and operates within the same policies and regulations of any NYC public high school. Each year since its opening, the school has added approximately 120 new ninth graders; the school is now at capacity with approximately 450 students.

The Forest Stewardship Council, awarded the Organization Award, is an independent nonprofit organization that promotes environmentally sound, socially beneficial, and economically prosperous management of the world’s forests. As a democratic platform to bring diverse interests together, FSC was created in 1993 to help consumers and businesses identify products from responsibly managed forests. FSC sets standards by which forests are certified, offering credible verification to people who are buying wood and wood products. FSC has more than 29,900 certificate holders in 113 countries, and 450 million acres of forestland are certified under FSC standards around the world. For more information visit www.fsc.org.

Senator Debbie Stabenow from Michigan and Congressman Jeff Fortenberry from Nebraska were both awarded the Legislative Award. Senator Debbie Stabenow of Michigan was elected to the United States Senate in 2000. Senator Stabenow is the author of the 2014 Farm Bill, which contains the most far-reaching enhancements to land and water conservation policy in decades, including the Regional Conservation Partnership Program, which will empower landowners, conservation groups and local communities to lead the way on conservation projects for water, air and wildlife.

A member of the Senate Agriculture Committee, Rep. Fortenberry advocated for provisions in the 2014 Farm Bill to protect our nation’s wetlands and prairies as well as the wildlife that depend upon these ecosystems. In 2012, his home state of Nebraska had the highest rate in the nation of grasslands converted to cropland.  Thanks to his efforts, federal crop insurance policy will no longer provide an incentive to destroy what is left of Nebraska’s native grasslands. Fortenberry is also a long-time supporter of the State and Tribal Wildlife Grants program, administered by the U.S. Fish and Wildlife Service. The program provides federal grants for states to develop and implement programs that benefit wildlife and their habitats, with a priority on at-risk wildlife.

Purchase your tickets for the 2015 Conservation Achievement Awards Gala >>