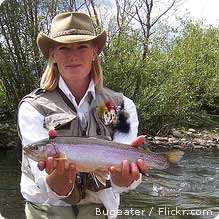 The Bureau of Land Management today released a draft Environmental Impact Statement for the Roan Plateau, a backcountry area prized by hunters and anglers for its fish and wildlife and a cornerstone of the area’s recreation economy.

Sportsmen’s groups were reviewing the draft EIS, but they welcomed the BLM’s designation of last year’s settlement as its preferred option in efforts to balance energy development with conservation.

“This keeps us moving toward a balanced, fair solution to protecting the Roan Plateau,” said David Nickum, executive director of Colorado Trout Unlimited. “We’re hopeful that the final management plan will preserve last year’s settlement, which protects the Roan’s best hunting and fishing habitat while allowing careful, responsible development of its energy reserves. Done right, we can meet both goals.”

In 2012, a federal court set aside the BLM’s prior management plan for energy leasing and remanded that plan for the agency to consider more protective development options. Last fall, a settlement was reached between BLM and Trout Unlimited, the National Wildlife Federation and other groups, represented by Earthjustice.

Under the settlement, BLM cancelled the majority of oil and gas leases on top of the Roan Plateau, including all of those in the Trapper and Northwater Creek watersheds—areas that encompass the best cutthroat trout habitat on the Roan. The BLM committed to considering a new management plan alternative that would allow for some limited development on remaining leases, preclude new leasing on top of the plateau for the life of the plan, and conserve important big game habitat at the base of the Roan.

“The base of the Roan includes important winter range for the region’s mule deer herd—we remain concerned about the impact of oil and gas development on these areas,” said Kate Zimmerman, public lands policy director for the National Wildlife Federation. “NWF welcomes the release of the new DEIS and hopes the final outcome is better conservation of these vital big game habitats and the migration corridors connecting these habitats with wildlands on the top of the plateau.”

“Hunters don’t call the Roan Plateau a ‘mule deer factory’ for nothing,” said John Gale, conservation director of Backcountry Hunters and Anglers. “The hunting opportunities here are world class, and hunters in Colorado drive a nearly $1 million economic engine that generates sustainable revenue for local communities. BHA remains committed to the Roan Plateau and looks forward to working with the BLM to promote balanced development that prioritizes consideration of wildlife, hunting and fishing.”

For more than a decade, Colorado TU’s Grand Valley Anglers chapter, based in Grand Junction, has invested thousands of dollars and hundreds of volunteer hours into fish habitat and stream restoration projects on the Roan. The Roan holds in its small streams rare populations of genetically pure Colorado River cutthroat trout—a native species found in less than 10 percent of its historic range.

“Grand Valley Anglers is glad to know that progress is being made towards protecting the native Colorado River cutthroat trout on the Plateau,” said John Trammell, a Grand Valley Anglers volunteer who has worked on the Roan for over 20 years.  “We want to emphasize that drilling should be excluded from the drainages that hold native cutthroat trout, as agreed under the settlement.”

“Sportsmen and wildlife groups will continue to work with BLM and other parties in coming months to ensure that the balanced future for the Roan Plateau that is envisioned in these settlement provisions are adopted by the BLM in the final Resource Management Plan,” said Suzanne O’Neill, executive director of Colorado Wildlife Federation.

Sportsmen for the Roan Plateau