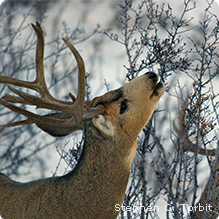 The National Wildlife Federation and its state and territorial affiliates are urging authorities to do all they can to ensure the remaining unlawful occupiers of the Malheur National Wildlife Refuge leave peacefully, make the site safe once again for the public and wildlife, and hold the occupiers accountable to make clear that Americans won’t tolerate future Malheurs.

In the letter to Secretary Sally Jewell and Attorney General Loretta Lynch, the conservation organizations that represent more than 6 million members and supporters expressed sorrow over the loss of life as a result of the illegal occupation as well as appreciation for the bravery of law enforcement and community members who have endured turmoil for weeks. “Community leaders and government officials in Oregon and beyond say they fear there could be major damage at the refuge as well as elevated safety risks for employees and local residents if the remaining occupiers are permitted to stay—and worse yet, copycat occupations and similar efforts elsewhere,” wrote the National Wildlife Federation and 37 affiliates.

“As the illegal occupation of the Malheur National Wildlife Refuge winds down, perpetrators are held accountable, and damages are repaired, we must also focus on the policy dispute at the heart of this debate: Should our public lands be sustained for the benefit of all Americans, or should they be exploited for the enrichment of the few or sold off to the highest bidder?” said Collin O’Mara, president and CEO of the National Wildlife Federation. “Sportsmen and wildlife lovers across America, who are outraged by these criminal acts, must now turn their attention to these fights in state legislatures and Congress to defend our shared outdoor legacy for future generations.

“We’re thankful the actions and bravery of law enforcement personnel in addressing the unlawful seizure of the Malheur National Wildlife Refuge and express our sorrow at the loss of life that resulted from that occupation. We support the continued efforts of authorities to reach a peaceful conclusion to this standoff,” concluded O’Mara.

The National Wildlife Federation and its state affiliates are urging Americans to take a stand for wildlife and conservation by buying federal Duck Stamps, created in 1934 after President Franklin Delano Roosevelt signed the Migratory Bird Hunting Stamp Act into law. Every duck hunter in the U.S. must buy a stamp every year and other outdoor enthusiasts buy them to support conservation. Today, 98 cents of every $1 spent on a stamp go directly to restore waterfowl habitat, buy vital habitat or acquire conservation easements in the National Wildlife Refuge System. Nearly 26 percent of the Malheur refuge was acquired using money from Duck Stamps.

“In Oregon, we have watched as a band of bullies has shut the public out of public lands for weeks and run roughshod over habitat that is crucial for hundreds of species of wildlife. The Association of Northwest Steelheaders and other state affiliates of the National Wildlife Federation regret the loss of life during the arrests. The whole mess didn’t have to happen -- and shouldn’t happen again,” said Bob Rees, executive director of the Association of Northwest Steelheaders, the National Wildlife Federation’s Oregon affiliate. “All Americans have a vested interest in conserving lands that sustain our wildlife and our outdoor traditions and in keeping peace in our communities. It’s time for the lawbreakers to leave and face the consequences of their actions.”