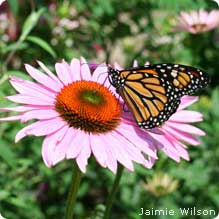 In honor of its 20th anniversary, the Disney Conservation Fund (DCF) today announced a targeted philanthropic strategy to help protect the planet by collaborating with leading nonprofit organizations to help threatened wildlife and inspire a lifelong love for nature in young people. The new initiative, called “Reverse the Decline, Increase the Time,” is aimed at reversing the decline of 10 threatened species through scientific research and community engagement, and increasing the time kids spend in nature to inspire them to care for the planet. DCF’s investment in the National Wildlife Federation (NWF) will help protect and restore Monarch butterflies by engaging young people in discovering the magic of nature and protecting the planet through wildlife gardening and outdoor time at home, school and in their communities. The Fund also supports the Federation’s Great American Campout program.

As part of “Increase the Time,” Disney is supporting nonprofit organizations, including National Wildlife Federation’s Butterfly Heroes program, to increase the time kids and families spend in nature, bring awareness to the declining population of monarch butterflies, and connect young gardeners to help the monarchs and other pollinators. NWF’s Great American Campout is also designed to get thousands of families involved with outdoor camping.

The network of Reverse the Decline, Increase the Time nonprofits and organizations include:

Association of Zoos and Aquariums

“Wildlife and wild places have always been an inspiration to Disney, and we take pride in instilling that same inspiration in kids and families,” said Dr. Beth Stevens, senior vice president, Environment & Conservation, Corporate Citizenship, The Walt Disney Company. “We believe that conservation and caring for the planet are more than just good ideas—they are core to who we are as a company. With the Disney Conservation Fund’s new initiative, it is our hope that our actions will help protect some of nature’s most precious habitats and ensure the health of our planet for generations to come.”

A video and book about the “Reverse the Decline, Increase the Time"  initiative, as well as a list of supported organizations can be found at disney.com/conservation.

Established on Earth Day in 1995, the Disney Conservation Fund (DCF) helps to protect the planet and connect kids with nature. Supported by Disney and guest purchases and contributions at Walt Disney Parks and Resorts, DCF has proudly contributed $40 million in grants to nonprofit organizations working in 115 countries.