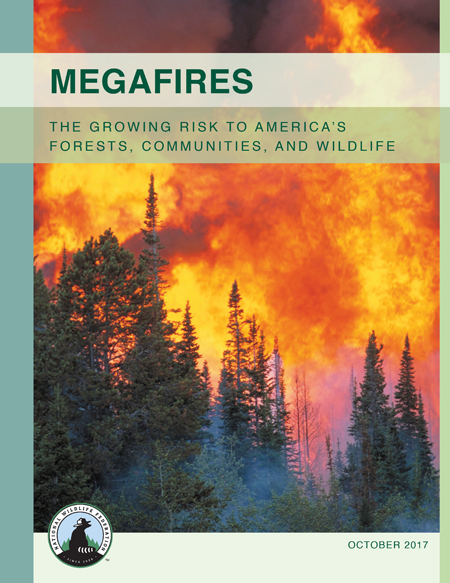 “While fire is natural and often essential to forest health, our nation is increasingly experiencing unprecedented megafires that are burning larger, hotter, and longer than ever before. This year alone, more than 8.77 million acres have burned across the West, including the tragic fires in northern California this month that killed more than 40 people. Our nation needs immediate, bipartisan action from Congress to restore our National Forests and reduce escalating risks from megafires. We must ensure adequate funding and effective management tools for restoring forest health and reducing fire threats; otherwise, catastrophic megafires will occur more frequently and become even more dangerous for people, wildlife, and communities.

“Over the next month, we urge lawmakers to address the megafire crisis by solving the wildfire funding crisis, prioritizing forest restoration, and advancing outcome-driven wildfire management practices. In addition, we must reduce the carbon pollution that is driving climatic changes, which are making wildfire season longer and more damaging by increasing temperatures and amplifying drought conditions. By proactively restoring our forests and addressing the underlying conditions exacerbating megafires, we will ensure that our forests are healthier and future wildfire seasons are less destructive.”

“I applaud the National Wildlife Federation’s efforts to confront the new realities of longer, more frequent and more severe wildfire seasons in the aftermath of what has been a particularly devastating season for Montanans and others across the West," said Montana Governor Steve Bullock. "The report lends credence to the growing consensus that sensible reforms to the way we budget for wildfires to treat them like other natural disasters and efforts to accelerate collaborative-based forest restoration are needed now more than ever to safeguard our communities, our water supplies, and our wildlife.”

“Fires have mixed effects on habitat for salmon and trout. Increased fine sediment in stream gravels reduces egg and fry survival in the short term, before flushing out,” noted Ian Fergusson, Resources Director at Association of Northwest Steelheaders. “Long-term, large logs are delivered to stream channels, which greatly improves overwintering habitat. Temperature increases due to loss of shade, coupled with expected climate effects, could be serious. A consistent short-sighted reaction to fires is to call for salvage logging, with suspension of environmental regulations. This has the potential to lengthen the period of fine sediment delivery and reduce the delivery of large wood, making the fire impacts that much worse. Fire management, both before and after fires, must be evaluated carefully basin by basin.”

“Much has been said, and politicized, about the steadily intensifying fire seasons in the West,” said Brian Brooks, Executive Director, Idaho Wildlife Federation. “Some are quick to place blame or capitalize on political opportunities, yet nothing gets done to address the real problem. Here is a report with clear and concise fire science that should be used to guide forest restoration and fire adaptation, and ultimately should lead to a fire funding fix.”