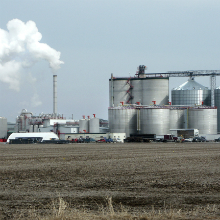 Millions of acres of wildlife habitat are being lost to crop production, according to a new peer-reviewed study published today in the journal Environmental Research Letters, which found a strong link between the location of corn ethanol refineries and the conversion of wildlife habitat and other land types into crop production. In total, researchers found that more than 4 million acres had been converted to agricultural production within a 100-mile radius of ethanol plants between 2008 and 2012, the years immediately following passage of a federal mandate to produce ethanol to be blended into gasoline.

“Our analysis shows an undeniable connection between corn ethanol production and habitat destruction,” said study co-author Ben Larson, senior manager of forestry and bioenergy for the National Wildlife Federation. “This massive loss of wildlife habitat is happening under the radar of the public and many policy makers—even though the impacts are enormous. These data are a wake-up call that EPA needs to rethink its implementation of the Renewable Fuel Standard while Congress enacts meaningful reform.”

Researchers from the University of Minnesota Duluth, University of Wisconsin, and the National Wildlife Federation assessed satellite imagery and land classification data from the U.S. Department of Agriculture to determine conversion rates from non-farmland into farmland in the years following passage of the federal Renewable Fuel Standard, the federal mandate to blend corn-based ethanol and other renewable fuels into gasoline. The study builds on a previously published analysis by researchers at the University of Wisconsin that found 7 million acres nationwide were converted to crop production during the same period, and that corn was the most common crop planted after conversion.

The results show that grasslands and other habitats closest to ethanol plants suffered the highest rates of conversion to crop production, and that conversion rates declined as the distance from ethanol plants increased. The loss of millions of acres of wildlife habitat occurred despite a section in the Renewable Fuel Standard that prohibits fuel from crops produced on converted land from being used to comply with the blending requirement.

“This research demonstrates the Renewable Fuels Standard’s devastating impacts on wildlife habitat. Despite the law requiring that EPA only allow biofuels from lands in production before 2007, this report clearly shows that more than 4 million acres near ethanol plants were converted from wildlife habitat to crop production since 2008.  Right now, Congress and EPA can adopt bipartisan, common-sense solutions that protect wildlife habitat and water quality, while promoting sustainable fuels to power America,” said Collin O’Mara, President and CEO of the National Wildlife Federation. “We look forward to working with Congress and the EPA to adopt reforms that will help recover impacted duck, pheasant, songbird, and monarch populations and restore our nation’s treasured grasslands that have borne of the brunt of the RFS’ unintended consequences.”

The failure of the Environmental Protection Agency to enforce the prohibition on clearing land has led to the loss of important wildlife habitat, particularly in regions critical for monarch butterflies, ducks and other ground-nesting birds, and many other species. It has also resulted in deteriorated water quality and harmful algal blooms in places like Lake Erie as a result of increased farm runoff. NWF documented many of these impacts in a report late last year, titled Fueling Destruction: The Unintended Consequences of the Renewable Fuel Standard on Land, Water, and Wildlife.