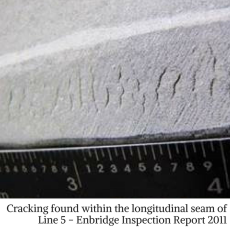 ANN ARBOR, MICH. –Today the National Wildlife Federation released records of spills, ruptures, and equipment failures from an oil and natural gas liquids pipeline system operated by Enbridge Energy that runs through Wisconsin and Michigan’s Upper and Lower Peninsulas, crossing under the Straits of Mackinac. The data reveals that the system, known as Line 5, has experienced at least 29 spills, which have released more than 1 million gallons of oil and natural gas liquids, according to data from the Pipeline Hazardous Materials Safety Administration. This is nearly double the number previously believed to have occurred.

Enbridge Energy is the same company that owns and maintains the pipeline formerly known as Line 6B, which ruptured in 2010, by the U.S. Environmental Protection Agency’s account spilling more than 840,000 gallons of oil into Talmadge Creek and the Kalamazoo River.

“We have a pipeline system with a history of problems running through our country’s largest source of surface freshwater, and it happens to be operated by the company responsible for one of the largest inland oil spills in North America,” said Mike Shriberg, executive director for the National Wildlife Federation’s Great Lakes Regional Center. “This pipeline system places the Great Lakes and many local communities at an unacceptable risk. The state of Michigan needs to find an alternative to this risky pipeline to protect our drinking water, health, jobs, and way of life.”

National Wildlife Federation’s new interactive map allows the public to better understand where and what has been spilled from Enbridge Energy’s pipeline system, the repair methods that have been used, and how leaks and defects are being discovered. The map can be accessed at: http://www.arcgis.com/apps/View/index.html?appid=f817f5abad9a4cb09e942c1941fd0060.

“This new information causes us grave concern about the integrity of the inland pipe system, inconsistencies with spill reporting, and the effectiveness of leak detection systems, repair methods, and long-term planning for the integrity of the decades-old pipeline system,” said Beth Wallace, the National Wildlife Federation pipeline safety specialist who discovered the newly released data. “A significant number of these releases note manufacturing and construction defects, as well as weld failure, which calls into question the overall integrity of the Line 5 system.”