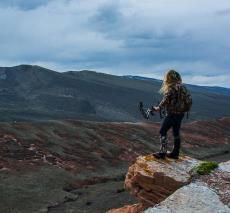 DENVER – Today the National Wildlife Federation (NWF) officially launched Artemis, a conservation coalition of America’s sportswomen. Founded by women from six Western states to defend public lands and waters, iconic wildlife species, and to develop female leaders in wildlife and conservation fields, Artemis believes with the immense privilege of being able to hunt and fish our amazing public lands and waters comes the obligation to protect and serve these wild places.

In Greek mythology, Artemis is the goddess of the hunt and wildlife, a fitting symbol for a group whose mission is: To protect sporting traditions, support women as leaders in the conservation movement, and foster the next generations of conservationists to ensure the vitality of our outdoor heritage.

“We know so many sportswomen who are dedicated public lands hunters and anglers who have felt like hunting and fishing is really a good ol’ boys club,” said Jessi Johnson, Artemis’ sportswomen’s coordinator. “While we certainly stand in solidarity with the entire sporting community we know it’s due time to bring new voices to the forefront and to add strength to the conservation community in a time of unprecedented threats to our sporting heritage. Artemis is about creating conservation gains using the vast talents of our sportswomen’s community to build an inclusive and diverse roster of advocates that can boldly respond to the attacks on public lands and build new leaders who will continue to fight for our traditions well into the future.”

The group chose its focus areas because of the ongoing and deepening threats to public lands and wildlife, and the need to build and highlight women’s leadership in the wildlife and conservation fields. Women currently make up more than 25 percent of anglers and roughly 20 percent of all hunters, yet few women lead sporting conservation campaigns and wildlife conservation organizations.

“More women are hunting, fishing, and shooting than ever before, representing the fastest growing segment of the sporting community,” said Collin O’Mara, president and chief executive officer of the National Wildlife Federation. “We absolutely need more women in leadership roles across the Federation family and the broader conservation community—and Artemis will play an important role in making this vision a reality. As the husband and father to strong women who love to fish, I fully support the tireless work of the pioneering founders of Artemis and am extremely excited about what lies ahead.”

“We believe in a ‘complete sportswoman’ concept, a concept where, yes we hunt and fish, but we also have relationships with decision makers, we build leaders, advocate for wildlife, and teach others to do the same,” said Maggie Heumann, an outdoor retailer and Artemis co-founder. “Without this level of engagement, we don’t see a future that looks good for our sporting traditions.”

Artemis will conduct several service projects and public outreach events in its first year throughout the West with a focus on improving wildlife habitat and building a network of sportswomen. The group plans to host a sportswomen’s summit in spring of 2018. The goal will be to bring sportswomen, conservationists and well-known female leaders together for leadership workshops, conservation training, and sporting activities all to build upon Artemis’ work and expand its reach across the country.

“We are thrilled to be part of this amazing group, to come together with these sportswomen, and to bring our much-needed voice to the forefront of the conservation movement,” said Alexis Bonogofsky, a Billings, Mont., rancher, lifelong hunter and Artemis co-founder, “we have big plans and will certainly be a force to be reckoned with”.