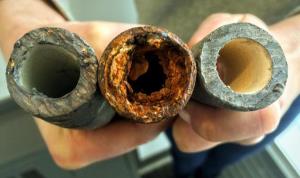 FLINT, MI - Thousands of Flint residents could face foreclosure over unpaid bills for lead-poisoned water unless a Governor-appointed board and the Michigan Legislature take action. Freshwater Future and the National Wildlife Federation are calling upon the Flint Receivership Transition Advisory Board to vote to approve the Flint City Council’s one-year moratorium on water liens and upon the State of Michigan to provide sufficient funds to cover the past-due bills.

"It's a disgrace,” said Flint resident Kendra Brown, who faces foreclosure for unpaid water bills, “We still receive bills for water we can't use, and the bills are too high, the service charges are too much, and I can't sell my house because property value has gone down.”

The Michigan Senate today passed a budget bill that will deposit an additional $150 million into the $612 million state “Rainy Day Fund.” Meanwhile, Flint residents are drowning in a sea of past-due water bills that together amount to $5.8 million, and thousands of residents are at risk of having their water service discontinued for nonpayment. Additionally, under current law, the city incorporates unpaid water bills into property taxes, meaning homeowners face foreclosure.

"The need in the community is so great to keep water flowing to families who have been impacted by the lead poisoning in Flint,” said San Juana "Juani" Olivares, president and CEO of the Genesee County Hispanic Latino Collaborative. “Our organization is overwhelmed by requests from families including the elderly and children who simply cannot pay these rates."

"The governor's decision to end water relief credits gave the impression that the water crisis was solved. Let's be clear: Flint residents are now being asked to pay the highest water rate in America for water that's still toxic to drink without a filter,” said Jill Ryan, Executive Director of Freshwater Future. “The state needs to step in with funds to stop all water shutoffs and home foreclosures."

Last year, the lien process was suspended while the state legislature’s “water relief credits” subsidized residents’ bills. Governor Snyder ended those credits in February, which amounted to just $40 million over 3 years. Flint’s Receivership Transition Advisory Board—the governor-appointed board that approves all budgetary decisions made by Flint’s democratically elected City Council—had an opportunity last Wednesday to discontinue the liens, but postponed the vote indefinitely.

On May 17, City Council unanimously approved a one-year moratorium on water liens and sent the resolution to the Advisory Board for approval at its June 14 meeting. Instead, the Advisory Board voted to table discussion until an undetermined date, leaving the fate of over 8,000 homeowners in limbo. Without the board’s approval, the city must move forward with the liens.

“Access to clean, fresh water is an American right, and yet the citizens of Flint are charged some of the highest water rates in the nation for water poisoned with lead,” said Mike Shriberg, executive director of the National Wildlife Federation’s Great Lakes Regional Center. “It would be a terrible injustice for any Flint residents lose their homes over bills for water they can’t use.”

The Receivership Transition Advisory Board meets on the second Wednesday of each month, with the next regular meeting scheduled for July 12, 2017. Until the board approves the Council’s moratorium, the water liens that threaten over 8,000 homeowners will continue.