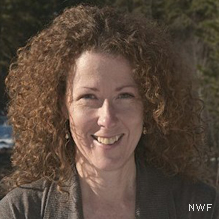 WASHINGTON, D.C. – Tracy Stone-Manning, the former chief of staff for Montana Gov. Steve Bullock and a longtime conservationist, is the new associate vice president for public lands at the National Wildlife Federation.

Stone-Manning, who started work Monday, heads the national public lands team, whose staffers are based in the National Wildlife Federation’s Rocky Mountain Regional Center in Denver and in Washington, D.C.

The job was elevated to an associate vice president position to reflect the importance of protecting public lands to the organization’s mission and the broadening of the public lands work across the country, said Collin O’Mara, the National Wildlife Federation’s president and CEO.

“Tracy Stone-Manning is one the most effective conservation leaders in America and the National Wildlife Federation is fortunate to have her leading one of our most important conservation priorities– protecting and improving the management of America’s public lands,” O’Mara added. “Tracy’s extensive experience will be invaluable as the Federation and our state affiliates expand our public lands program nationwide and work with Congress and the administration to conserve and enhance our outdoor heritage.”

Before serving as Bullock’s chief of staff, Stone-Manning was his director of the Department of Environmental Quality. She was also a natural resources adviser and state director for Montana Sen. Jon Tester. From 1999-2007, she was the director of the Clark Fork Coalition in Missoula, Mont., where she spearheaded the successful effort to remove a dam at the confluence of the Clark Fork and Blackfoot rivers, as well as advocated successfully for a $120 million cleanup of the upper Clark Fork.

"I'm thrilled to be part of an organization that has such a deep commitment to our nation's conservation heritage," said Stone-Manning. "I look forward to growing support for our nation's public lands, which are key to ensuring our ability to pass that legacy on to future generations."

The National Wildlife Federation and its state and territorial affiliates have worked for years to prevent the sale and transfer of national public lands to the states or private owners, O’Mara said. The organization’s more than 6 million members and supporters are committed to seeing that our country’s public lands legacy, built over more than a century, remains intact and that we improve management to ensure that our fish and wildlife populations survive and thrive, he added.

“With her background and experience with Americans of all political stripes,” O’Mara said, “Tracy is the absolute right person to lead the National Wildlife Federation’s efforts to conserve public lands. Now more than ever, we must increase collaboration among Americans across the political spectrum to improve the management and ensure sufficient funding for the places where we hunt, fish, paddle, hike, and connect to the natural world.”

Stone-Manning has lived in Montana since 1988. She earned a bachelor’s degree in radio, television and film from the University of Maryland and a master’s of science in environmental studies from the University of Montana. She started her career as an intern with the National Wildlife Federation in Washington D.C. in 1987. She is a hunter and hiker and is married to the writer Richard Manning.