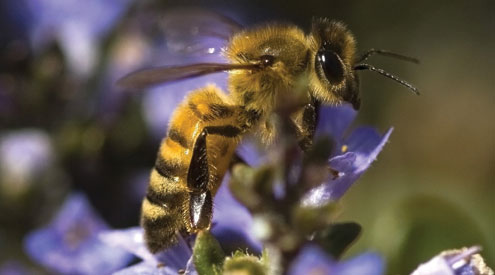 The partnership comes after news last year that the U.S. Fish and Wildlife Service added the first bumble bee (the rusty patched bumble bee) to the endangered species list as part of the U.S. Endangered Species Act. The species was once an excellent pollinator of wildflowers, cranberries and other important crops including plum, apple, alfalfa and onion seed.

“Bees are responsible for one in three bites of food we take. Without them, our entire food production system as well as natural ecosystems would come to a grinding halt,” said David Mizejewski, naturalist for the National Wildlife Federation. “But bee populations have been declining at alarming rates.This campaign deals with the issue head-on to educate people on the role they play in the decline and the actions they can take to reverse it.”

Bee-lovers can participate in the campaign and help spread the word by sharing their love of bees via social media using #dontkillmybuzz and tagging @beesponsible. For each such post, Beesponsible® will donate $1 to the National Wildlife Federation (up to $100,000) to support the organization’s conservation efforts, such as Garden for Wildlife® and other pollinator-friendly, pesticide-free gardening programs. They can also purchase campaign t-shirts via Beesponsible.com, with $5 from each sale also supporting the National Wildlife Federation.

“Don’t Kill My Buzz is a playful statement with serious roots, taking the issue of the world’s bee decline to a literal level. Our goal is to bring attention to plummeting bee populations and inspire people to do something to help,” said Jessica Cummings, communications director for Beesponsible. “We’re proud to be supporting the National Wildlife Federation and turning all the buzz about bees into meaningful change.”

Bees love us. They pollinate our fields, orchards and gardens. They bring sweetness to our lives. But bees are threatened and need our help. That’s why a few bee-lovers in Kansas started the Beesponsible movement to celebrate the deep connection we share with bees and inspire people to do something to help them. Beesponsible means making a promise to bees and to the environment, and taking personal responsibility to help them. In the world today, this collective effort to Beesponsible may be one of a handful of ways we can make real change and help keep bees a healthy and thriving part of our lives. For more information, visit Beesponsible.com.

About the National Wildlife Federation